WWE Raw roundup: Reigns pins the champion, then puts him through a table 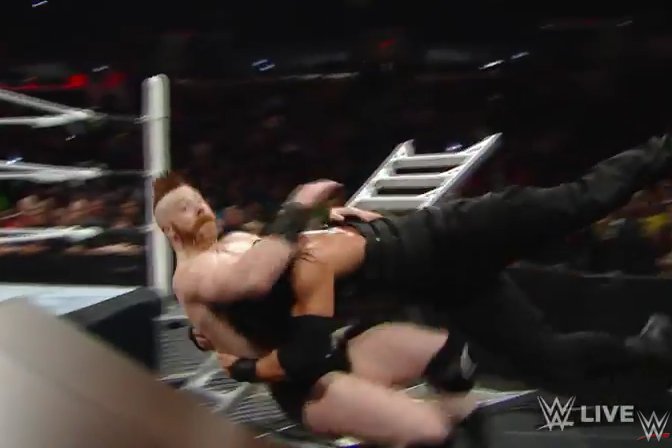 Roman Reigns speared Sheamus through a few tables to end the brawl at the end of Monday Night Raw.

The go-home Raw to Sunday’s TLC pay-per-view took place from the North Charleston Coliseum in North Charleston, SC Monday night. The program started off with what felt like a Survivor Series-type match, we learned more about Charlotte’s change in character, and Reigns and Sheamus couldn’t wait for Sunday at TLC to battle.

We also saw the return of an ECW original to join the Dudley Boyz and Tommy Dreamer and Kevin Owens was back in action after being sent home last week due to illness. Did this show get you pumped for the last pay-per-view of the year? Let’s take a look at what happened on Monday night:

I actually thought the opening match was really good and even unique. After the show opened with promos for each of the four teams, Roman Reigns/Dean Ambrose and The Usos took on the League of Nations, the Wyatt Family and Team Extreme in a 16-man elimination tag team match.

Bubba Ray Dudley teased over the weekend that his group would be introducing an “extreme brother” to the fray, and they did exactly that on Monday night. Rhyno, who’s been in NXT helping the younger generation, made his re-debut on Raw and formed a four-man tag team with his brothers of extreme.

Rhyno’s addition will now lead to a Tables Match at TLC with himself, the Dudleyz and Dreamer taking on the entire Wyatt Family.

Some highlights from the 16-man elimination tag team match include:

Tommy Dreamer eliminating the Wyatt Family by pinning Erick Rowan after a DDT.

Reigns and Rhyno had a pretty cool standoff before both were attacked. The spear vs. the Gore. I can dig it. Maybe we’ll see that at the Royal Rumble.

Sheamus eliminated Team Extreme by pinning Bubba Ray Dudley after a Brogue Kick. And then we saw Reigns eliminate the League of Nations by pinning Sheamus after a spear. Yep, the champion was pinned. Again.

We shouldn’t be surprised, though. Sheamus will probably retain the championship on Sunday. So in theory, it doesn’t hurt that he got pinned, right? Well, I mean in WWE-land, right. Do I think people won’t tune in to the pay-per-view on Sunday because Reigns pinned Sheamus? Not really. In fact, I think in their view, more people will because they think Reigns will win the title then. So, even though I think that I know what they’re thinking, I still don’t think it’s the best way to go about booking champions.

Then again, they’ve been doing that for a long, long time and haven’t stopped yet. So, I doubt they’ll change now.

Later in the main event segment, Reigns and Sheamus would brawl among tables, ladders and chairs. Huh. Sheamus said after Reigns pinned him that he was going to teach him a lesson, but Reigns would be the first to show up. After a long-winded and, quite frankly, boring promo, the two would engage in a brawl that ended with Reigns spearing Sheamus through a table on the outside of the ring. Tell me why I need to see these two again in the main event on Sunday?

Kevin Owens is back

After not being on Raw or SmackDown last Monday, Kevin Owens was back in action on Raw, competing in a pretty good match with Dolph Ziggler. Tyler Breeze came out to ringside with Summer Rae to do his usual, but nothing really happened with him, so I’m not sure why we needed that in the first place.

During the match, Ambrose was taking some mental notes on his opponent at TLC. Or he was just having a snack. Or he was doing both.

After Owens’ victory, Ambrose made his way to the ring with some popcorn and soda. Ambrose and Owens will face off on Sunday for the Intercontinental Championship, but this little segment didn’t make the champion look very good. Ambrose threw popcorn into Owens’ face followed by some soda. Owens, who looked pretty mad, just stomped around the ring angrily as Ambrose left. Not sure what the point of that was, but I wouldn’t be surprised if it was some inside joke.

The WWE Divas Champion, Charlotte, and her father, Ric Flair, were guests on Miz TV Monday night. According to The Miz, Paige was supposed to be the guest, but due to “circumstances beyond his control,” he had to nix that.

Miz brought up the fact that “ some people” would describe Charlotte as selfish and egotistical, but Charlotte quipped back that he wouldn’t be saying that if she was a man. Her father then stood up and said his daughter wasn’t going to be used as a ratings ploy for Miz TV, something he was adamant about.

Even if you have flair, this is still @RealPaigeWWE's house... NEVER FORGET! #Raw #MizTV pic.twitter.com/xLZaSXPHVn

Well, it was all a ploy by Miz. Paige would come out and she actually did what we thought would be a better way to build to a feud between her and Charlotte, and slapped her father right in the face. Charlotte would then attack Paige at the behest of her father. It’s hard to tell now who’s really the babyface and the heel in this feud, because Charlotte’s shown a change in attitude and it almost feels like she’s slowly turning heel. Maybe they’re making Paige slowly turn back into a babyface now? I’m not sure, but hopefully their title match at TLC will be better than their Survivor Series encounter.

And speaking of The Miz, he’s still trying to recruit Neville. He brought in some backup on Monday night.

After Team B.A.D. took out Brie Bella and Alicia Fox, the WWE Tag Team Champions came down to the ring sporting some unicorn headgear. They gave Sasha Banks, Naomi and Tamina each unicorn headgear and the two groups wound up dancing in the ring until we hit a commercial. Pretty awesome moment.

The New Day took part in a tag team match against of the participants in Sunday’s Triple Threat Ladder Match, the Lucha Dragons, on Monday night. The Usos, the other third involved in the upcoming match was at ringside for commentary.

We here at @WWE DO NOT support unicorn violence. #Raw @WWEUsos pic.twitter.com/JRwaU8eUsu

The brothers would eventually attack Xavier Woods and his trumpet, causing Kofi Kingston to get distracted and be rolled up by Sin Cara for the pin.

Another match, another champion pinned. You know, there was a time in professional wrestling, and, hell, sports entertainment, where the champion losing was just not something that happened. It happens literally each and every week now, sometimes twice a week. Whoever decided that wins and losses in WWE do not matter is sorely mistaken.

Due to his new group with the League of Nations, I assumed something would be going on with the WWE United States Champion, Alberto Del Rio, and his manager, Zeb Colter. Colter was not around last Monday on Raw or SmackDown with Del Rio during his time with his group, so this was probably the ideal time to write him off television for the time being.

After what he must have deemed an embarrassing moment after he tripped over Colter’s scooter during a chairs standoff with Jack Swagger, Del Rio would eventually feel enough was enough, apparently, and promptly left MexAmerica for good.

In a backstage segment Monday night, Del Rio blasted Colter for making him a laughingstock and now that he was with the League of Nations, he didn’t need him anymore. As Colter rode away, Del Rio would throw a chair at him and take out a bunch of steel pipes.

Colter comes out of this as a very sympathetic figure, especially when seeing his reaction to Del Rio. He almost looked hurt, both physically and emotionally. That actually was some damn fine acting. Kudos.

“The Rose Bush” has quietly become my new favorite Raw segment. If Adam Rose can make this work, he’ll be golden.

Make sure to stay tuned to PhillyVoice.com for my TLC preview and predictions later this week!

• Sasha Banks and Naomi d. Brie Bella and Alicia Fox by pinfall via the Rear View by Naomi on Brie.

• Rusev vs. Ryback ended in a double countout. Lana faked an injury outside the ring and Rusev would wind up getting the upper hand on Ryback, putting him in The Accolade and leaving him laying outside the ring.

• Jack Swagger d. Stardust by submission via the Patriot Lock. Del Rio attacked Swagger and Stardust with a steel chair after the match, but Swagger would grab a chair and engage in a standoff with Del Rio.