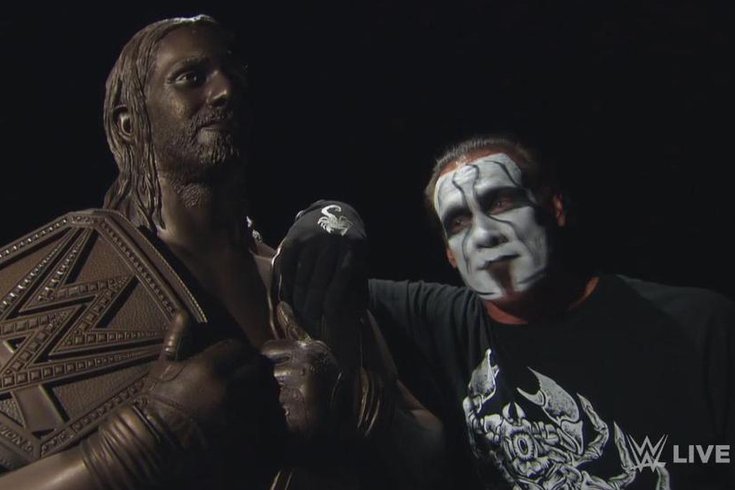 Sting hung out with Seth Rollins’ statue all Monday night ... and then trashed it.

The Labor Day edition of WWE’s Monday Night Raw emanated from the Royal Farms Arena in Baltimore, and The Authority decided it was time to test their champion for Night of Champions by having him pull double duty on Raw. The rest of the night was pretty much setting up some big things for next Monday’s season premiere of Raw, which will be going head-to-head with our Eagles on Monday Night Football.

It’s going to be a terrible night for me, but a great night for wrestling fans because WWE will certainly pull out all the stops for a huge show next Monday.

Also, check out our fifth episode of The Straight Shooters on Wildfire Radio, where we talk about the hot button topics in professional wrestling, and introduce the Thursday Night Debate.

I really enjoyed the opening segment of Raw, if for nothing else that it reminded us at Night of Champions, despite Seth Rollins defending gold twice on the card, that Sheamus is lurking, waiting for his moment to cash in his Money in the Bank briefcase.

Coining himself “Seth ‘Freakin’” Rollins, the WWE World Heavyweight Champion owned the opening of the show, even though we’ve seen much of the same stuff week after week, and I think he hit a home run. I really enjoyed Sheamus coming out to remind us Rollins may be working triple duty on September 20th, because it just makes sense. Sometimes, the little things matter. If Sheamus was nowhere to be found, and wound up not doing anything in regards to the WWE World Heavyweight Championship at Night of Champions, then it really would have left a severely bad taste in my mouth. I’m just glad WWE creative didn’t forget about this highly important angle.

On the other hand, the seeds definitely are planted for a future Triple H/Rollins feud, as evident by the busy night the WWE World Heavyweight and United States Champion had. The COO of WWE booked his champion in two matches to prepare for the double duty he’ll be pulling in at Night of Champions, as Rollins faced the Intercontinental Champion, Ryback, in one on one action and then tagged with the WWE Tag Team Champions, The New Day, to take on the Prime Time Players and John Cena.

What’s interesting is the apparent disinterest Triple H has for the whereabouts of Rollins’ statue. I mean, didn’t The Authority pay top dollar for that to be put in the WWE Headquarters in Stamford? Why is Triple H having this la dee da attitude towards the fact that it’s missing? Did he have something to do with it?

Well, it turned out that Sting was in Baltimore all along. GASP! After teasing Rollins the last three weeks regarding his statue, Sting trashed the Styrofoam figure at the end of the program while Rollins watched from the ring. This is a huge development in this feud. Really. It is.

A fan made his way out to the aisle while Rollins was making his entrance for the main event. He was next to him for a while before security gathered around him. They didn’t even take him down, which I would assume they should at that point, especially in today’s world. If that fan had a weapon, Rollins was left alone with him for seconds that could have resulted in a very terrible outcome. Luckily, nobody was hurt.

I like how Ryback said in a backstage promo the Intercontinental Championship has a long lineage of fighting champions, and that’s what he aspires to be. Ryback’s last title defense on television before SummerSlam was at Money in the Bank back in June. Sure, he was out a while with a staph infection, but he’s defended the title in one match since he’s been back. Those were probably the wrong words to use in his promo.

Kevin Owens interrupted Ryback, and this likely will lead to a feud between the two. I like it, as long as Owens gets the title in the end.

During the Rollins-Ryback match, one would think Owens would be the one to interfere and cost Ryback the match, but it was actually The Vigilante, Sting, who would affect the outcome. He appeared on the Tron with Rollins’ statue, causing the distraction and allowing Ryback to roll Rollins up with a funky looking small package for the win. So we now have the Intercontinental Champion pinning the World Heavyweight Champion. May be something to remember down the road.

Speaking of The New Day, the team will defend their Tag Team titles on Raw next week against the Prime Time Players, and the winners of that match will face the Dudley Boyz at Night of Champions for the titles.

After Randy Orton was seen talking to Roman Reigns and Dean Ambrose backstage, likely about the possibility of teaming up with them to take on the Wyatt Family at Night of Champions, the Wyatts decided to take a preemptive strike against the Apex Predator.

After Orton’s match with Sheamus, the Wyatt Family attacked Orton at ringside. For what it’s worth, WWE’s Twitter account may have accidentally already revealed who Reigns’ and Ambrose’s mystery partner will be at Night of Champions over the weekend by posting a picture, but I’ll leave it you to go to the dirt sheets to find out if you want to find out who it might possibly be.

This whole Dolph Ziggler/Rusev/Lana/Summer Rae angle can’t end soon enough. Lana wasn’t at Raw because she reportedly broke her wrist at a live event over the weekend, so that left the writers to come up with a doozy of a segment we saw on Monday night.

Summer Rae apologized to Rusev for betraying him because Ziggler kissed her. Rusev said it was AOK. My how far he has fallen since WrestleMania. Ziggler came out and superkicked Rusev and, of course, Rusev walked away. They’ve castrated his character and there’s really been nothing good about this angle since it began. I thought I saw something last Monday begin to build, but it quickly crumbled. I still hate everything about this.

Nikki Bella will be defending her Divas Championship next Monday against Charlotte, as the two won’t wait until Night of Champions to get it on. According to Charlotte, The Authority granted a petition for her to wrestle Nikki next Monday, when the record for longest reigning Divas Champion will be set. Charlotte than attacked Nikki and put her in the Figure Eight, much to the delight of nobody it seemed. The Baltimore crowd was dead silent during this. Not good.

#WOOOOO! @MsCharlotteWWE just forced #NikkiBella to tap out to the #Figure8, but can she do it next week?! #Raw pic.twitter.com/W6XTHdKVXK

I know WWE wants to make this program mean a lot since they’re billing it as Raw’s season premiere, but I’m not so sure we’ll see a title change here. I would love for it to happen, and it would make for a huge moment, but if WWE is hell bent on getting A.J. Lee’s name out of their record books, they’ll have Nikki retain next Monday.

While it didn’t look like it meant much at the time, Sasha Banks did defeat Paige in the first match of the night, so they really should build her up as the number one contender once Charlotte wins the title. It has to happen. The revolution needs to truly begin now.

It looks like Los Matadores are set for another repackaging after the tag team turned on El Torito after they lost to the Dudleys. This might not be a bad thing if they come back as serious contenders.

Cesaro and The Miz fought to a double countout after the Big Show came to ringside, targeting The Miz. Miz ran off, and Show hit Cesaro with a knockout punch. The only feud I would be interested in seeing Big Show involved in at this point is with Cesaro, because it would make Cesaro look great because he has natural, raw strength. That’s probably a Raw match next Monday, though.

• Sasha Banks d. Paige by pinfall via a small package after Naomi ran into the ring, causing a distraction.

• Roman Reigns and Dean Ambrose d. The Ascension by pinfall via Dirty Deeds by Ambrose.

• Non-Title: Seth Rollins (c-WWE, US) d. Ryback (c-IC) d. by small package after Sting came on the Tron and distracted Rollins with his statue.

• Randy Orton d. Sheamus by pinfall via the RKO.

• The Dudley Boyz d. Los Matadores by pinfall via the 3D.

• Cesaro vs. The Miz ended in a double countout after Big Show came to the ring and chased Miz off. Show then hit Cesaro with a knockout punch.