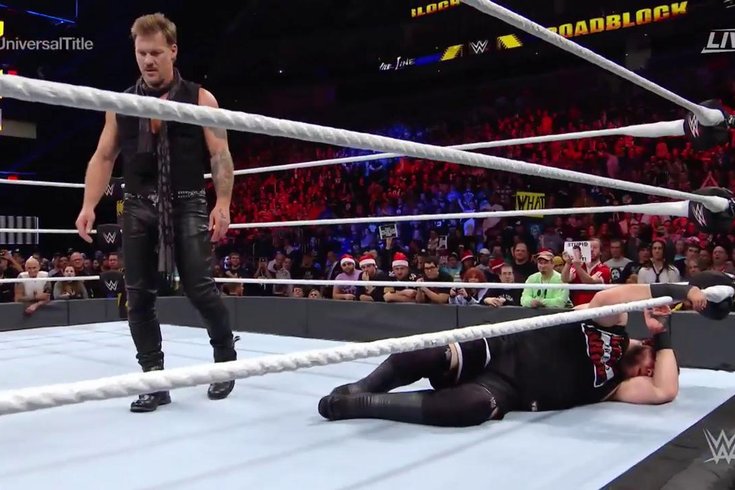 The PPG Paints Arena in Pittsburgh was the site for WWE’s last pay-per-view of 2016. Roadblock: End of the Line certainly looked good on paper, and on Sunday night, it delivered in some key matches that will be talked about for a while.

Here’s what happened in Pittsburgh on Sunday night:

Enzo Amore made his return to television - if you don’t count the Tribute to the Troops from last Wednesday night - and gave a scathing promo directed at Rusev and Lana. And he was involved in the end of the match. Sort of.

While both Rusev and Cass were on the outside, the Bulgarian Brute knocked down Enzo. Cass was checking on him as Rusev was able to make it back into the ring before the ten count. The match was a big bowl of nothing. I’m glad it was saved for the preshow. I’m sure we’ll see more between these two parties on Raw. I can’t wait.

Your winner by countout: Rusev

At 483 days, The New Day’s historic tag title run was meant to be all but over. After setting the record for longest-reigning tag team champions last Wednesday, many felt it was time to now bring up a new tag team to challenge New Day. But, sure, have Cesaro and Sheamus face these guys again that they’ve lost to about 100 times.

And, of course, have them beat them! Though this match was fantastic and the ending was great, it still doesn’t make a ton of sense to me that the team that New Day beat a bunch of times eventually beat them for the titles and not a new up-and-coming tag team.

The ending is what made the title switch worth it. While Sheamus went for the tag to Cesaro, Cesaro jumped the gun and got in the ring. It turns out - or, rather, it was explained as such - that it was a part of Cesaro’s plan to throw off Kofi Kingston, who hit Cesaro with Trouble in Paradise and then went for the pin. Realizing he had a chance to take advantage of Kingston’s attention being on Cesaro, Sheamus cross bodyblocked him and turned it into a pin ad he locked Kingston’s legs and got the three-count.

After the match, Cesaro hugged his opponents as they were ready to hand over the Tag Team Titles, but Sheamus wasn’t having any of that. He took the titles and held them himself. I certainly await the storylines these two will be involved in as champions, but I hope the tag team division doesn’t suffer because of it. It’s time to push the entire division and make the teams credible again.

Zayn started out the match with some smarts, but he soon fell victim to the power of Strowman. Strowman dominated him much of the match, and Raw commissioner Mick Foley came down to the ring with a white towel, ready to throw it in.

Zayn saw him and demanded he not, and he grabbed the towel and threw it away. He hit Strowman with the Helluva Kick and was going for another one as the clock struck all zeros, and Zayn was announced the winner. I’m not sure why.

Shouldn’t it have just been a draw? A win for Zayn counts as a loss for Strowman, regardless of what WWE will tell you.

Two great talents were kind of being wasted in a match that meant nothing on Sunday night. This could have been a No. 1 contendermatch, or a match for entry into the Royal Rumble. But this was just a regular match in which the outcome would have no positive or negative on Rollins or Jericho.

But it was a good match. If anything, these two can always have a good match. Kevin Owens tried interfering on Jericho’s behalf - again - and led to the end of the match. Rollins hit The Pedigree pon a distracted Jericho to get the victory.

Austin Aries was on commentary for this match, as he’s also on commentary during the 205 Live show on Tuesday nights on the WWE Network. This adds a new element and I feel necessary, as Aries, even though he’s a heel, can help get this division over.

This was a rather short match. I didn’t have any hope this would be a great match, and thought it might rival the Zayn-Strowman match as being one of the worst of the night.

The action wasn’t bad, it just wasn’t exciting. I’m still waiting for WWE to make this division worthwhile and give us a reason to care not only about its competitors but the champion, too. Swann has a great story, and they’ve somewhat told it, but it hasn’t been enough. Swann is still lacking that connection with the crowd.

He did, however, come out of this match as the champion. He hit a spinning kick on Perkins, putting him down for the three count.

After the match, Neville appeared. Swann thought the man who helped him, according to Michael Cole, was coming out to congratulate him. That wasn’t the case. Neville attacked the champion and then attacked Perkins, who tried to help.

Neville is part of the Cruiserweight division now. And it’s about time.

This was the “End of the Line” for the Banks-Flair feud, according to all people involved. So, we were sure to see some of the best spots these two could dish out. And we did.

The first one happened when Flair kicked out the legs of Banks on the ring apron, sending her crashing her face into the steel steps. Surprisingly, she didn’t get busted open - though, later in the match, she would. Flair went to get her from the outside of the ring, but Banks kicked out at two.

Shortly after, Flair hit Natural Selection with 12:25 remaining, but Banks kicked out at two again. It was like pulling teeth to get the first fall of the match, but Flair finally did it. With 10:44 remaining, the challenger hit the champion with Natural Selection from the top rope, and that was enough to ground Banks for the three count as Flair took the 1-0 lead.

Flair tried pinning Banks twice again after that, but Banks kicked out and then got her foot on the bottom rope to break it up. Flair started insulting her opponent, slapping her in the face and taunting her.

A couple minutes later, Banks was able to roll Flair up and pin her for the three-count, tying the match, 1-1. Flair missed a moonsault, and Banks locked in the Bank Statement. Flair tapped out with 6:03 remaining, giving the defending champion a 2-1 lead.

With about four and a half minutes remaining, Flair targeted Banks’ left knee and began setting up for her patented Figure Eight leglock. Eventually, Flair locked it in and Banks tapped out with three seconds remaining, tying the match, 2-2. Yeah, it was a poor camera angle that showed Banks clearly staring at the clock to see how much time was left, but Flair did a great job at bridging the move and seemingly giving Banks no choice but to tap given the added pressure to her leg in those three seconds. That’s an important part of why I didn’t have a huge issue with the timing of it.

With the match tied after the 30 minutes expired, referee Chad Patton made the decision to go into sudden death overtime. Flair stalked her prey and continued going after Banks’ leg. Banks was able to lock in the Bank Statement, but the pain was too much as Flair was able to lock in the Figure Eight again, eventually bridging up and causing Banks to tap out once again, allowing Flair to become the Raw Women’s Champion once again.

Before the match, Owens was backstage at Jericho’s locker room, basically talking to himself about how sorry he was how the friendship soured. He got no answer. He seemed to come to terms with the friendship being over. Stay tuned.

Owens and Reigns had a pretty good match, but Banks-Flair easily could have been the main event of the night. But we’d all find out just why this match was booked as the main event in the end.

There was a pretty nifty spot where Owens hit the frogsplash on Reigns on the announce table, but it didn’t break. So he did it again, and the second time it did break. Reigns was able to make the ten count and get back in the ring and was met with yet another frogsplash by Owens off the top rope.

There were a couple of near falls, especially when Owens grabbed the title ready to hit Reigns, but ran into a spear instead.

Jericho came down to the ring and stood between Reigns and Owens. He turned to Owens and hit him with The Codebreaker, causing the disqualification.

After the match, Jericho grabbed the Universal Title and gave it to Owens as they embraced and the commentators purveyed the message that it was all a plan and the tension between the two the last month was all an act.

Once Reigns realized what was happening, the two made their way up the aisle. But Rollins’ music hit and he met them halfway. Both Rollins and Reigns destroyed Jericho and Owens, powerbombing each of them onto the Spanish announce table at ringside and the English announce table by the set, respectively. Just like old times when Rollins and Reigns were members of The Shield. Could we be seeing a rebirth of the popular group? I wouldn’t doubt it.

So, now we’ll probably see more Reigns/Rollins vs. Owens/Jericho. I’m not sure who can step up into the main event right now. We’ll find out Monday night on Raw if they have a new contender in mind for Owens. But after Sunday night, Rollins and Reigns may lay claim to the title and we could possibly see a Triple Threat Match down the road.

As for the rest of the card, I thought the Women’s Championship match was great and the drama at the end was fantastic. The tag title match was also great, and the rest of the matches were okay. There was nothing terrible on the show. Neville returning and becoming a heel was great, too. I’m excited to see what he can bring to the Cruiserweight division.

I’ll have more tomorrow after Monday night’s edition of Raw where we’re sure to see some fallout from Roadblock and also begin the build to January’s Royal Rumble pay-per-view.