WWE SmackDown: Did Dean Ambrose become No. 1 contender to Styles? 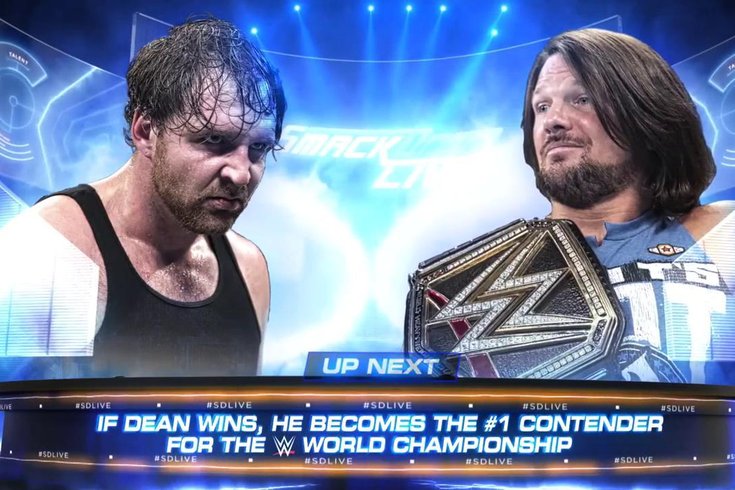 Dean Ambrose had a chance to become AJ Styles’ next opponent for the championship on Tuesday night.

Becky Lynch made her return to SmackDown, Dean Ambrose vied for a championship opportunity in the future against AJ Styles, and we saw our first two qualifiers for Survivor Series on Tuesday night from the Resch Center in Green Bay, Wis. It honestly feels like these two-hour SmackDown shows are so well put together and make sense that, some weeks, they go by too quickly.

Tuesday night’s edition of SmackDown was no different. It was another really good professional wrestling show and really highlighted the big differences between the blue brand and Raw on Monday nights. Raw is struggling big-time lately and even though SmackDown lacks Raw’s “big-star power,” it’s still a way better wrestling show.

Did Dean Ambrose become the No. 1 contender again?

AJ Styles and Dean Ambrose fought one more time in Tuesday night’s main event, but this time James Ellsworth wanted to be in Ambrose’s corner. Ellsworth holds two straight victories over Styles, but on Tuesday night, it was Ambrose’s turn to fight for his chance to be No. 1 contender to Styles’ championship again.

Ellsworth begged Ambrose to let him be in his corner during the match, and Ambrose begrudgingly accepted. And that would be the deciding factor in the match.

#NOChinMusic!!! @RealEllsworth gets revenge on @AJStylesOrg ... BUT RIGHT IN FRONT OF THE OFFICIAL!! #SDLive pic.twitter.com/E7dQc00GUv

Ellsworth was kicked during the match by Styles, so naturally, when the opportunity presented itself to get a great superkick in on Styles’ chin, Ellsworth didn’t let that opportunity slide. In plain sight of the referee, Ellsworth superkicked Styles on the outside of the ring, effectively screwing Ambrose’s chances at becoming the No. 1 contender again. At least for now.

Your winner by DQ ... @AJStylesOrg!! @TheDeanAmbrose just LOST his chance to be #1Contender! #SDLive pic.twitter.com/9Xahz6RxcB

Ellsworth realized what he did after the fact and looked very remorseful while Ambrose wasn’t happy. I wonder if we’ll get Ambrose vs. Ellsworth next week? And another Ellsworth win…

The SmackDown Women’s Champion made her return to television after an extended absence to take care of a minor health issue. Lynch was introduced but her No 1. contender, Alexa Bliss, made her way down to the ring.

If there’s one woman in the division that’s had a great run since the brand extension began, it’s Bliss. Her mic work has been great, her character is perfect and she’s improved in the ring. Bliss told Lynch to just hand over the Women’s Championship to her, and when Lynch got in her face, Bliss tried attacking her. They went back and forth before Bliss got the upper hand and spray painted a yellow streak down her back. I love when random spray paint is available at ringside. At least the nWo always brought their own.

The two are set for a showdown for the SmackDown Women’s Championship in two weeks.

Bray Wyatt and Kane faced off against each other in a No Disqualification match Tuesday night. With Kane randomly inserted into the Randy Orton-Wyatt storyline, Wyatt seems to have more of a gripe with Kane nowadays than Orton.

During the match, Luke Harper showed up – to nobody’s surprise – and a little later on, Orton’s music would hit. He got into the ring and while Kane was setting up for a chokeslam to Wyatt, Orton hit The Demon with an RKO out of nowhere.

Later on, during a backstage interview, Orton said, “If you can’t beat them, join them.”

That’s kind of what happened with SmackDown general manager Daniel Bryan about three years ago when he joined the Wyatts just so he could turn on The Eater of Worlds while the two were confined to a steel cage after a match with The Usos. It wouldn’t surprise me if that’s the same thing that happens here. I don’t think there’s a chance Orton turns heel already and joins the Wyatts after the feud they’ve had.

In a battle to not only qualify for the Survivor Series women’steam, but become the captain of the team, Natalya and Nikki Bella clashed on Tuesday night. Natalya’s been approaching the SmackDown general manager the last few weeks and

Bella countered a surfboard attempt by Natalya and somehow reversed it into an STF, causing Natalya to tap out. She unfortunately won’t be on the Survivor Series SmackDown team. At least for now.

So, what’s going on with Dolph Ziggler?

Ever since Dolph Ziggler won the WWE Intercontinental Championship on October 9, he’s kind of just been toiling since. He hasn’t been a big part of SmackDown the last couple of weeks, and I think that’s a huge mistake. Continuing the feud with The Miz isn’t a bad call, but what has Ziggler done since winning the Intercontinental Title?

The answer is nothing. I hope they get him going once again before the crowd forgets he’s the brand’s midcard champion.

Yes, this is a Raw storyline, but I’d be remiss not to include that WWE officially confirmed Goldberg vs. Brock Lesnar will happen at November’s Survivor Series pay-per-view. This isn’t a surprise at all, but we still have three weeks of appearance on television between both Goldberg and Lesnar before they clash in Toronto. I wonder if we’ll get a physical confrontation between the two before the match?

• No Disqualification: Bray Wyatt d. Kane by pinfall after Randy Orton showed up and surprisingly hit Kane with the RKO.

• Survivor Series Qualifier: Nikki Bella d. Natalya by submission via the STF. Carmella attacked Nikki after the match and hit her with the Bella Buster.

• Non-Title/No. 1 Contender’s Match: AJ Styles (c) d. Dean Ambrose by disqualification after James Ellsworth hit Styles with a superkick outside of the ring.