WWE SmackDown: Making sense of the follow-up to the Daniel Bryan-Miz promo 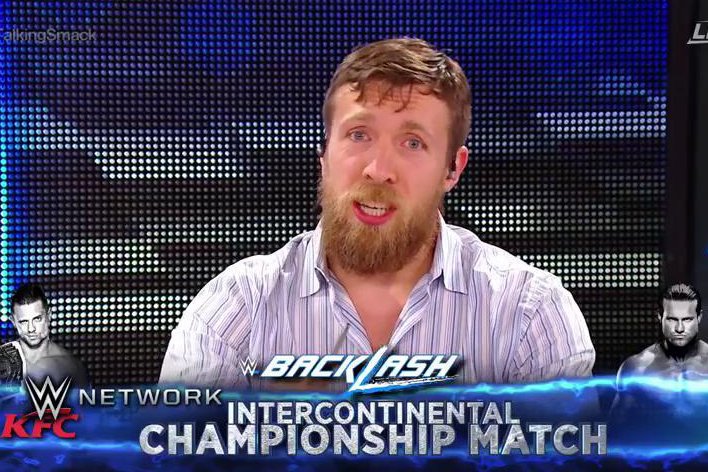 Daniel Bryan said if he had any guts, he’d quit WWE and wrestle on the indies on Tuesday night.

Many were wondering how the program would follow up last Tuesday’s spat between general manager Daniel Bryan and Intercontinental Champion, The Miz. While there wasn’t much follow up on the television program, after the show went off the air, Bryan said on ‘Talking Smack’ that The Miz was right and if he had any guts at all, he’d quit and go to the indies because he feels healthy.

That’s interesting. Why would he say that on camera, even if he did feel that way? In a way, that makes WWE look bad. It makes it look like Bryan doesn’t want to be there. He feels healthy, so why not go wrestle? Why not do what he loves? He’s become the character who is afraid of doing what he wants.

Me? I’m a fan of compelling television. I thought the entire angle was great. But having Bryan with that ho-hum, Miz is right, I wish I could quit type attitude is not what the character is about. It just felt out of place. It would have been good to try and explain that Bryan feels healthy, but no doctors will clear him, preventing him from wrestling anywhere and, thus, staying with WWE.

With that being said, I’m glad they’ve explained every nuance of the angle on either television or the WWE Network. It’s that next level thinking we’ve been waiting forever since the birth of the Network. I hope we see more angles like this play out on both platforms.

As Tuesday came to an end last week, the big story was about The Miz and his promo on SmackDown Bryan on the WWE Network’s ‘Talking Smack.’ While being interviewed by Renee Young, Bryan was approached by Miz, who was not exactly happy about not being featured on SmackDown. After all, he’s the Intercontinental Champion, and he made sure everyone knew about it.

Tuesday night, The Miz opened the program by storming to the ring and talking about he doesn’t wrestle like a coward, but more that he wrestles smart. Maybe he doesn’t like getting hit in the face because he is a good defender of it and doesn’t let it happen. What do you think about that!? Huh!?

Funnily enough, Miz blamed the people in power for making the Intercontinental Championship basically worthless. He’s not wrong. Titles don’t mean much, if anything, in WWE anymore.

Dolph Ziggler interrupted the champion, saying he’s right about everything he said. Ziggler said the people see through everything Miz does. Ziggler says while all the superstars go above and beyond to be the best, Miz just wants to be famous. Ziggler challenged Miz so he could prove he isn’t a coward, but the champion walked out of the ring, teased getting back in the ring and then left to go backstage.

That prompted Ziggler to grab the mic and called him a “soft-faced coward,” but Maryse held Miz back from getting into the ring.

The general manager made an Intercontinental Championship match official for September 11 at Backlash, with Miz defending against Ziggler.

This was an interesting choice for a main event, and was a good chance to see what Baron Corbin could do with the spotlight on him. Sure, AJ Styles was on commentary and he’ll get the title shot at Dean Ambrose at Backlash, but Corbin had a pretty impressive showing.

After getting the upper hand on the champion, Corbin got in Styles’ face because, for some reason, Styles decided to get up from the commentary table to give some unwanted motivation to Corbin. Ambrose pushed Corbin into Styles, and after a few near falls in the ring, Styles accidentally nailed Corbin with a kick to the head.

Corbin would win by disqualification, but he would eat a Dirty Deeds from Ambrose, who then was able to catch Styles as he attempted a Phenomenal Forearm, but instead fell onto the ropes in the no-no region. Ouch.

Bray Wyatt’s Sermon for the Serpent

After Bray Wyatt appeared during Randy Orton’s SummerSlam address to the SmackDown audience last Tuesday, he was set to expand on why Orton’s became his latest target. The Eater of Worlds explained thusly:

“Hi! My name is Bray Wyatt, Randy, and if you didn’t know, that is my game, man. I eradicate the infected. And if you really do have voices inside of your head, Randy, and they’re telling you what to do, Randy, then I pray that those voices are telling you to run. Run, Randy. Run.”

Well, Orton didn’t exactly run. He music hit and he came out to confront Wyatt.

“Actually, Bray, the voices in my head … the voices in my head are asking me who in the hell does this guy think he is? You think I’m damaged because I have a handful of staples in my skull. News flash, Bray, I’ve been damaged a long time. It’s what gives me most of my charm. So, from one damaged man to another, you have my attention.”

“There you are. There you are. That’s the Randy Orton I was hoping for. That’s the predator I wanted to see! You’re covered in stars and you’re still not afraid. I admire your courage, Randy, but there’s something you don’t understand. You are no longer the predator in this situation. You are damaged. You are weak. I am the predator now. And you should know better than anyone, Randy, what is it that a predator does best? He kills. And at Backlash, I’m going to cut the serpent’s head off and I’m going to hang it on my mantle just like the trophy that you are, Randy. [Laughs].”

I don’t like transcribing a lot of wrestling interviews, but Wyatt’s always are on point and fantastic. Orton said he’s played that game many years – with someone who thinks they’re the new predator – and he’s got internal scars. He’s got demons inside himself. He knows Wyatt does, too. And now we have Orton vs. Wyatt official for Backlash on September 11.

Orton stormed into the ring but the lights went out and we headed into a commercial. So, I guess Orton never got a chance to get his hands on Wyatt. But so far, this feud they’re building between Wyatt and Orton has been interesting.

A look into the life of Heath Slater

In Heath Slater’s continued quest to get a SmackDown contract, Renee Young made her way to the Slater residence. Rhyno, Slater’s new tag team partner, was also in the house.

Later on in the show, Slater and Rhyno defeated returning WWE tag team, The Headbangers, after Rhyno gored Thrasher.

• Natalya/Alexa Bliss d. Becky Lynch/Naomi by pinfall after Bliss rolled up Lynch. Nikki Bella was on commentary during the match, but was attacked by Carmella, leading to the rollup in the ring.