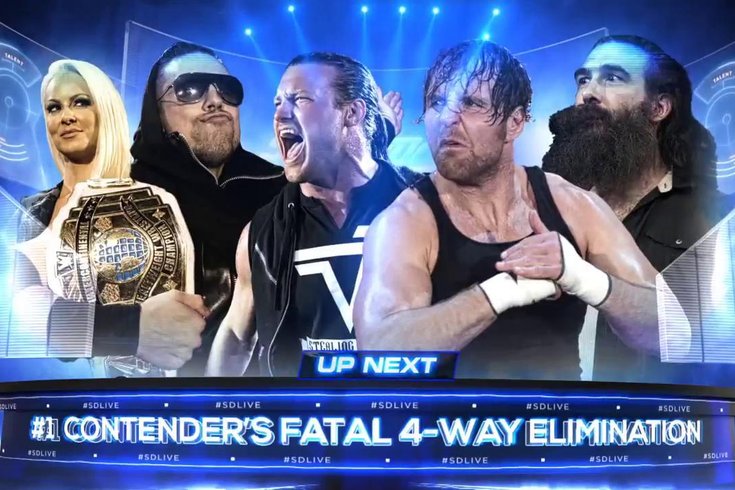 One of four became the new No. 1 contender to AJ Styles’ championship on Tuesday night. But who was it?

The SmackDown brand invaded the Verizon Center in Washington D.C. on Tuesday for a big day of television. Earlier in the day, WWE taped its 14th annual Tribute to the Troops special, which will air on the USA Network Wednesday night. Then a few hours later, SmackDown Live took the air.

We were supposed to see a WWE World Championship match, but we didn’t. Why? Let’s delve into it.

Here’s what went down in D.C. on Tuesday night:

MizTV ends in chaos and sets up the main event

The WWE Intercontinental Champion opened the show with an edition of Miz TV with the current WWE World Champion, AJ Styles. Just as SmackDown took the air, both Daniel Bryan and Shane McMahon told a sick, sneezing and coughing James Ellsworth to go home and that they would be postponing his WWE World Championship match against Styles once again.

Styles and Miz had a pretty jovial conversation until Styles mentioned nobody was on his level, and the Intercontinental Champion took some umbrage to that. As tensions began to rise, Dean Ambrose came out, followed by Dolph Ziggler. Soon after, Luke Harper appeared and took out Ambrose after The Lunatic Fringe took out both The Miz and Ziggler with Dirty Deeds.

This all led to the night’s main event, a Fatal Four Way Elimination Match to determine Styles’ new No. 1 contender.

AJ Styles to defend against ...

It was announced earlier in the show that Styles would put his title on the line against the winner of this match on the December 27 episode of SmackDown. For the match, Styles made his way down to the ring for some color commentary but didn’t get involved in the match.

Harper was the fan favorite for most of the match, and when Ambrose pinned him to eliminate him, the crowd showered the ring with boos. The Miz, who was pinned before that, also would have been a good choice to have won to give us something a little bit different heading into the new year. But that didn’t happen.

Ambrose eliminated The Miz by pinfall with a small package.

Ambrose eliminated Harper by pinfall after Ziggler nailed him with the superkick and Ambrose hit him with Dirty Deeds.

Ziggler eliminated Ambrose by pinfall via a superkick.

The Miz came back out at the end of the match but was nailed by both Ziggler and Ambrose.

Your new No. 1 contenders for the tag titles are…

There were new No. 1 contenders for the SmackDown Tag Team Championships crowned on Tuesday night in a seven-team battle royal. Despite Rhyno walking off the set of Talking Smack last Tuesday, he and Heath Slater were back in sync as they took on six other teams to vie for a shot at the tag titles. Unfortunately, their renewed faith in each other didn’t last long.

Slater accidentally eliminated Rhyno when trying to hit Fandango, who moved out of the way and left Slater to crash into his tag team partner in what seemed like super slow motion. Rhyno was eliminated, but that didn’t eliminate the entire team. Both team members had to be eliminated for the team to be eliminated. Shortly thereafter, however, The Ascension’s Viktor threw Slater out of the ring.

Shortly after, Zack Ryder eliminated Viktor by holding onto the ropes on a powerbomb attempt to the outside, winning the match for him and Mojo Rawley, who will eventually take on Bray Wyatt and Ryan Orton. Or Luke Harper? Remember, Harper is also technically a tag team champion because the Freebird Rule has been put into effect.

After the show, WWE announced Ryder suffered a knee injury during the match. WWE doctor Chris Robinson said Ryder appeared to injure his kneecap or his patella and they will have Ryder undergo an MRI to find out the extent of the damage.

The drama continues between Natalya and Nikki Bella

I’m not sure what the end game will eventually be for this angle, but it’s already kind of soured on me. Survivor Series was a long time ago, and Nikki Bella is still harboring resentment towards Natalya, who Carmella said attacked her so she could take her place in the women’s elimination match at the pay-per-view last month.

I mean, the creative team can come up with something better than that. Right now, these three women are kind of toiling into nothingness.

Lynch gets the win over Bliss, but not the title

Speaking of the women’s division, Becky Lynch got her rematch against Alexa Bliss on Tuesday night for the SmackDown Women’s Championship on Tuesday night. It didn’t end the way she would have liked it to though. Lynch won via countout after Bliss feigned a knee injury and stayed on the outside of the ring until the referee counted to ten.

Hot off hosting “Saturday Night Live” this past weekend, John Cena will return to SmackDown in two weeks when the show emanates from the Allstate Arena in Chicago.

• Carmella d. Natalya by pinfall via a small package. Nikki Bella was at ringside for commentary during the match.

• No. 1 Contender Battle Royal for the SmackDown Tag Team Championship: Hype Bros. d. The Ascension/The Vaudevillains/Heath Slater and Rhyno/Breezango/The Usos/American Alpha to become No. 1 contenders to the tag team titles.

• Non-Title: Alexa Bliss © vs. Deonna Purrazzo never happened as Bliss attacked Purrazzo before the match could start. Becky Lynch came out and traded barbs with Bliss. That led to a championship match after McMahon came out.

• SmackDown Women’s Championship: Becky Lynch d. Alexa Bliss © by countout after Bliss faked a knee injury to get counted out.

• Jack Gallagher d. Drew Gulak by pinfall after a running kick in the corner.

• Lince Dorado vs. Prince Ali ended in a double countout after Dorado hit the springboard moonsault to the floor and neither could reach the ten count. Ali kicked Dorado in the face after the match as the referee wanted them to shake hands.

• Non-Title: TJ Perkins d. Rich Swann © by submission via the TJP Clutch. Brian Kendrick was on commentary for the match.