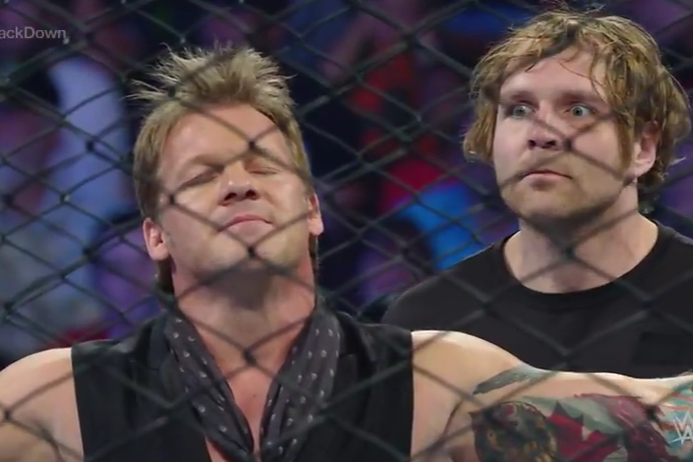 The last event before Sunday’s Extreme Rules pay-per-view aired on Thursday night from the Bon Secours Wellness Arena in Greenville, S.C. Some angles were furthered from Raw on Monday night, but the huge brawl at the end and when SmackDown went off the air had everyone talking.

We also saw Big Cass get another big win in an eight-man tag match, which is keeping him fresh in the fans’ minds. Once his tag team partner returns, it wouldn’t surprise me at all to see them grab the WWE World Tag Team Championships.

The Club and The Bloodline brawl all over the arena

The night’s main event featured the WWE World Heavyweight Champion Roman Reigns taking on Luke Gallows in a non-title match. It was a good match featuring two big men, which is hard to find in today’s wrestling. Gallows, who was previously in WWE before his current stint, is a good wrestler and he made Reigns look very good heading into Sunday’s pay-per-view.

Styles would eventually get involved as he and Karl Anderson were at ringside in Gallows’ corner, as were The Usos in Reigns’. Anderson crashed the ring and double-teamed Reigns with Gallows, which caused the disqualification. And then, all hell broke loose.

That’s a pretty good brawl all over the building. I wouldn’t have minded if WWE aired that on SmackDown, but they love those social media numbers, so posting it on YouTube was no surprise.

Chris Jericho entered the asylum on Thursday night – the same asylum he’ll enter Sunday night when he takes on Dean Ambrose in an Asylum Match. He took it all in because he’s not afraid even though Ambrose asked for the match and Shane McMahon granted it. Then, Ambrose took it all in and attacked Jericho from behind. Pretty good angle here.

Kevin Owens took on Cesaro in a one-on-one encounter with the WWE Intercontinental Champion Miz, along with his wife Maryse, and Sami Zayn on commentary. Miz would get involved in the match but Cesaro got rid of him, and then Zayn came into the ring and Cesaro took care of him. That allowed Owens to roll up Cesaro for the pin and head into Extreme Rules with the momentum. Which probably means he won’t walk out of the Fatal Four Way match with the Intercontinental Championship. Bummer.

It’s amazing how far Paige has fallen. She was one of the best women’s wrestlers on the roster, and now she’s jobbing to the likes of Dana Brooke. Brooke, who’s currently feuding with Becky Lynch, got the win against the former Divas Champion with a sitout slam. It was a surprising win given how Mauro Ranallo reacted to it and how Paige tried to kick out right as the referee’s hand hit the mat for the three. But, still… Paige’s downfall has been very surprising.

Big Cass gets another big win

While no injury is ever good, WWE has certainly made use of Colin Cassady since his tag team partner, Enzo Amore, has been out of action with a head injury. Until Amore is 100%, Cassady has been featured prominently on television and has been racking up some big wins. Thursday night was no different.

In an eight-man tag match, Cassady got the win for his team, which boasted the three members of The New Day, against the Dudley Boyz and Vaudevillains. Cassady hit the East River Crossing and Empire Elbow on Bubba Ray for the pin.

• Kevin Owens d. Cesaro by pinfall via a rollup after Miz and Sami Zayn get involved in the match.

• Dana Brooke d. Paige by pinfall via a Fireman’s Carry into a sitout slam.

• Dolph Ziggler d. Sheamus by pinfall via a superkick.

• Eight-Man Tag: The New Day and Colin Cassady d. Dudley Boyz and The Vaudevillains by pinfall via the East River Crossing and Empire Elbow by Cassady to Bubba Ray.