WWE SmackDown rundown: Does Reigns have a shot in the Rumble? 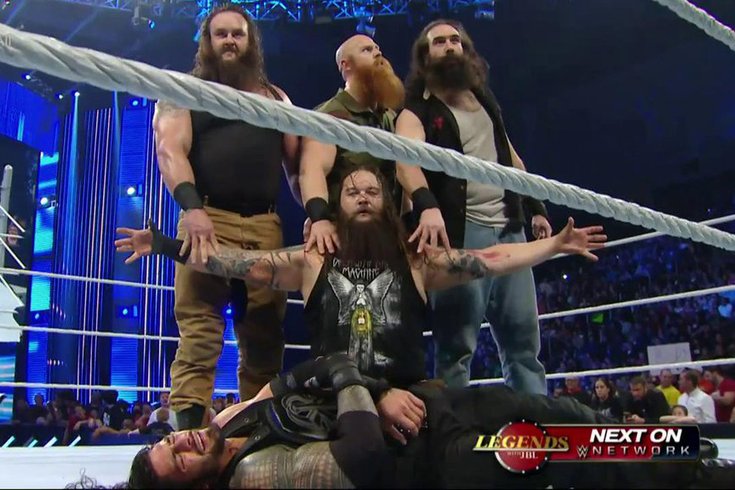 For the second time this week, the Wyatt Family stood tall to end the show.

The final stop before the Royal Rumble this Sunday night was in Dayton, OH’s Nutter Center on Thursday night for SmackDown. The go-home show to the Royal Rumble was less than spectacular, but it’s pretty obvious WWE has placed little to no importance on SmackDown even though the program has moved to the USA Network. Many people aren’t surprised. I am simply because a move to a better network with a better lead announcer would lead to better shows. Mauro Ranallo has certainly made the announce team better, but nothing that happens on SmackDown feels important.

Heading into the Royal Rumble, we never really had that ever predictable locker room clears out and brawls in the ring scene, which kind of leaves me bewildered. I can’t tell whether I like the fact that they didn’t have that scene or if I missed it. But, at least we had

Here are the main stories coming out of SmackDown.

It seems like nobody from the Wyatt Family will be winning the Royal Rumble match come Sunday night after what we witnessed at the conclusion of SmackDown. The Wyatts once again destroyed the WWE World Heavyweight Champion, Roman Reigns, on Thursday night, three nights after they destroyed Reigns on Raw along with the “Beast Incarnate” Brock Lesnar.

Reigns had to face the entire League of Nations in the main event, but the match would end in a disqualification after all four members would just attack him. It doesn’t look like Reigns is having much luck heading into the biggest match of his career.

Time for a New Jericho?

I’m waiting for the Chris Jericho/New Day promo feud to take the next step. Last week was good, but I feel like it’s already been overdone. We’re done with the mics. Sure, The New Day is one of, if not the best acts in WWE today. Jericho’s losing some of his mojo and it doesn’t feel like he’s putting everything he can into his on-screen character. That could be me misreading his demeanor, but he just doesn’t have the same Jericho oomph that he’s had in years past when he’s returned to television.

Miz TV featured the Intercontinental Champion, Dean Ambrose, and the No. 1 contender, Kevin Owens. Since the two will meet in a Last Man Standing Match on Sunday, Miz TV was the only appropriate place for a confrontation, right?

Well… not exactly. Ambrose interrupted The Miz’s introduction and talked about how he was going to beat Owens down. Owens would come out and the two had one of their classic promos on each other again before Miz decided to attack Ambrose from behind.

Miz called for Owens to come down to help him, but Owens hit Miz with the Pop-Up Powerbomb. He has no friends. Literally.

Kalisto attacked by the League of Nations

For some reason, Alberto Del Rio needed his fellow members of the League of Nations to help him beat up Kalisto backstage during an interview segment. Kalisto is almost half Del Rio’s size, so I’m not sure why he isn’t just playing the overconfident heel heading into his title defense at the Rumble against Kalisto. With his team leaving Kalisto laying, does that mean we’ll have a new champion – again – on Sunday night?

One of the biggest matches I’m looking forward to on Sunday is the Divas Championship match with Charlotte defending against Becky Lynch. These two should have a fantastic match.

• The Usos and Dolph Ziggler d. The New Day by pinfall when Xavier Woods is pinned after receiving a triple superkick.

• Becky Lynch d. Alicia Fox by submission via the Disarmer. Charlotte and Ric Flair were on commentary during the match.

• Titus O’Neil d. Stardust by pinfall via the Clash of the Titus.

• Handicap Match: Roman Reigns d. the League of Nations by disqualification after they all attacked Reigns at once.