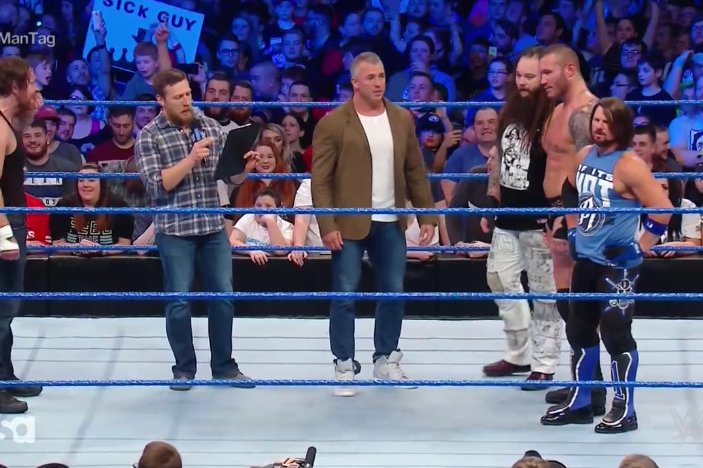 Daniel Bryan tried to recruit a new member for Team SmackDown Tuesday night. Could he?

For the second night in a row, WWE invaded the SSE Hydro in Glasgow, Scotland for a set of television tapings this week. During a stressful, nail-biting day in the United States with the Presidential Election taking place, WWE tried to take our minds off of the real world with a very entertaining episode of SmackDown.

One week ahead of the brand’s 900th episode celebration – with both Edge and The Undertaker returning to make cameos – the SmackDown crew closed out the television portion of WWE’s United Kingdom tour by revamping their Survivor Series men’s team.

The original members of Team SmackDown were AJ Styles, Dean Ambrose, Bray Wyatt, Randy Orton and Baron Corbin. But thanks to an “injury” during his match against Kalisto on Tuesday night, Corbin will sit out the Survivor Series pay-per-view in two weeks.

So, naturally, Team SmackDown needed a replacement. James Ellsworth was named the team mascot during the opening promo on Tuesday night, so he wasn’t eligible. And after a six-man tag team main event, we got our answer.

Wyatt, Orton and Harper defeated Ambrose, Ellsworth and Kane [who was originally supposed to be Corbin, but a backstage segment led to his match with Kalisto and subsequent “injury”] after Wyatt hit Ellsworth with Sister Abigail. As Ambrose tended to his fallen friend – because I guess they’re friends now – the SmackDown commissioner, Shane McMahon, made his way down to the ring to separate them. He was followed by SmackDown general manager, Daniel Bryan, who said that while his name was on the list of talent that could replace Corbin, he still would not be able to wrestle. So he named McMahon as a replacement, to which the commissioner responded:

So, there’s that. McMahon will be back in ring action on November 20 as a member of Team SmackDown. I’m guessing some sort of angle will take place that will lead to him being in the ring once again either at the Royal Rumble in San Antonio or WrestleMania in Orlando.

Alexa Bliss to get another shot at title?

Becky Lynch defended her SmackDown Women’s Championship against Alexa Bliss Tuesday night in a match that was originally scheduled to take place at last month’s No Mercy pay-per-view. Lynch had to undergo minor surgery, so instead of being stripped of the title, they just moved the title match back a month.

And it was a good one. It was billed as SmackDown’s main event despite beginning around the 9 P.M. mark, but it very well could have ended the show if the Powers That Be saw fit to book it that way. Lynch got the win via submission after Bliss tapped out to the Disarm-Her, but her foot was on the rope, which the referee didn’t see. Lynch said backstage after the match that if Bliss wanted another chance at the title, she’d give it to her.

In a surprising development, it looks like the Cruiserweight division could already be switching brands. It was announced in a backstage segment by the general manager that Kalisto will take on Raw’s Cruiserweight Champion, Brian Kendrick, in a title match at Survivor Series. The reasoning? Raw’s agreed to put their entire Cruiserweight division on the line because Dolph Ziggler will be defending his Intercontinental Championship against Sami Zayn in an interpromotional match.

Crazy, right? The entire Cruiserweight division put on the line because SmackDown might lose the Intercontinental Championship [they won’t] if Zayn wins.

While the Cruiserweight division might be better placed on SmackDown, especially with the two-hour window and SmackDown’s creative team insistent on creating stories for their wrestlers, Raw needs something to make people forget it’s three hours.

I’ve been a critic of the division since it debuted on Raw in September because it’s become “WWE-ized” and it’s lost that special flair that the Cruiserweight Classic gave these wrestlers over the summer. The matches are good, but nothing compared to the action we saw in the tournament. The title picture is a joke and I can only hope Kalisto wins at Survivor Series because Kendrick as Cruiserweight Champion is ridiculous on so many levels.

Will Dolph Ziggler be Intercontinental Champion?

NEXT WEEK: Intercontinental Champion @HEELZiggler defends the title vs. @MikeTheMiz, LIVE on #SDLive on @USA_Network! pic.twitter.com/gx9Rkz9b6g

One of the matches I’m looking forward to at Survivor Series is Ziggler putting his title on the line against Zayn. I think that’ll be a great match. But there’s a chance it doesn’t happen. That’s because Ziggler will defend his Intercontinental Championship on the 900th edition of SmackDown next Tuesday against former champion, The Miz.

2. Naomi d. Natalya by pinfall via a rollup after Natalya was distracted by Nikki Bella and Carmella at ringside.

3. Baron Corbin vs. Kalisto ended in a No Contest after Corbin suffered a knee injury.

4. Becky Lynch (c) d. Alexa Bliss by submission via the Disarm-Her even though Bliss’ leg was on the ropes.