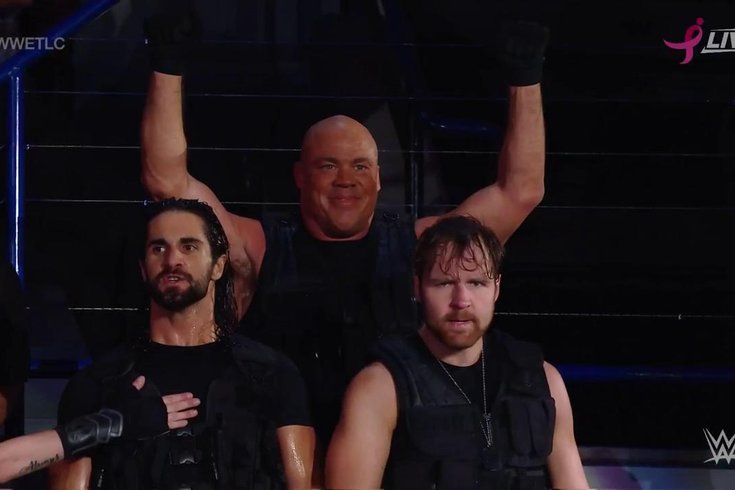 A mere two days before WWE’s TLC PPV, the card was flipped turned upside down as news of medical issues surrounding both Roman Reigns and Bray Wyatt resulted in them being taken out of the two biggest matches on the card.

In unconfirmed reports, wrestlers have been tested for exposure to illnesses, and apparently, Reigns and Wyatt were two names that needed to be quarantined for further evaluation.

So, who would WWE choose to step into their place? Well, they plucked one talent from the SmackDown Live brand, having AJ Styles now set to face “The Demon” Finn Bálor in a match that didn’t really make sense storyline-wise, at least on the surface.


In Reigns’ place? None other than the Olympic Gold Medalist and Raw general manager, Kurt Angle. That’s right – WWE decided to give their fans the return of Angle to the ring in order to mitigate the fact that The Shield wouldn’t be wrestling together for the first time in over three years Sunday night.

Many criticized the move. Angle’s return to the ring didn’t have any build. But there was no chance WWE was going to pair someone unworthy with Ambrose and Rollins in this match. None at all. Angle worked simply because of his name value alone. It wasn’t an opportunity for someone from NXT or even floundering on the main roster to step in and really sell the audience on their inclusion in the match. It just wouldn’t have worked. Especially considering WWE’s lack of nuance in storylines.

Angle was their best bet. But just how did he do in his first WWE match in 11 years? The crowd at the Target Center in Minneapolis would find out with the entire viewing audience on Sunday night. Let’s get to it.

A sort of grudge match that’s been brewing for a few weeks took place on the Kickoff Preshow Sunday night, and it wasn’t bad at all. Usually, matches on the preshow are subjected to lower expectations, but Alicia Fox is entertaining and Sasha Banks is good inside and outside the ring, so this match had a bit of a higher expectation for me. And they both delivered.

It was a fairly entertaining match, which was made even better with Fox’s antics, especially when she was yelling at the referee and the crowd to count while Banks was recuperating outside of the ring. Banks would make Fox tap out to the Bank Statement for the submission victory.

Asuka’s debut on the main roster had many expecting a squash match to really show the world how dominant she could be. And, well, that didn’t exactly happen on Sunday night.

Asuka and Emma had a really good match, but it wasn’t the squash we were expecting. And, all in all, I think that’s a good thing. This match did a lot for Emma, who’s been missing something since returning from injury on the Raw roster. This gave her some purpose and she worked with Asuka to have a good opener that the crowd was pretty hot for. No, it wasn’t a squash to make Asuka look unstoppable and a force to be reckoned with, but it helped out Emma immensely. Of course, that’s not what many will come out of this match thinking. I understand it, but Asuka “killing” Emma doesn’t really do anything for me. I thought this match was better for what it was than a squash would’ve been. Let’s see how WWE books Asuka moving forward.

Asuka got the win with the Asuka Lock (a cross-face chicken wing).

A cruiserweight tag team match featuring these four guys definitely had the possibility to be one of the better matches of the night. And, for what it was, it was good. It featured plenty of old school tag team wrestling with quick tags and the heels working over the babyfaces for a good portion of the match. Things got good when Swann hit Kendrick with a 450 splash, but then he ate a headbutt from Gallagher.

It wasn’t long after that in which Alexander hit Kendrick with the Lumbar Check for the pin. Good guys win!

This was a great match that told a great story. I’m not a huge fan of the storyline WWE used to get to this point, but they’ve used it before and they’re going to use it again [unfortunately.] James had several chances to win the title, but couldn’t get the job done.

Bliss worked on her left shoulder all match, and it came into play at the end. James fell onto her shoulder from the ropes but countered a Twisted Bliss attempt by the champion. Unfortunately for her, it wasn’t enough. Bliss was able to hit the DDT onto James after slinging her shoulder into the turnbuckle on the other side of the ring and retained her championship.

He may have lost his voice, but Enzo Amore regained something much more important on Sunday night. Kind of. In entertaining fashion – probably because I like him – Amore picked up the victory to regain the Cruiserweight Championship over Kalisto after a thumb to the eye while the referee wasn’t looking. He then hit him with his finisher to officially win back the title.

In a post-match interview, Amore gave thanks to himself, although it’s not the season of giving thanks just yet. I thought Amore would win back the championship, and while this match was okay, it was nothing to write home about. Not a surprise.

Even though the anticipated matchup of “The Demon” vs. “Sister Abigail” didn’t happen Sunday night, Bálor still wore his “Demon King” makeup for his match with Styles. Since his debut last summer, WWE has saved this look for storyline purposes, and since he was going to be “The Demon” at this pay-per-view anyway, they decided to stick with it. I’ve got no problems with it, especially because we got to see Bálor vs. Styles. Not a dream match, no, but damn close to it.

And man, it was fantastic. These guys are among the best in the business for a reason. Regardless of there being no story to the match, Bálor and Styles gave us their best.

Styles was sporting the all blue look … subtle. The two gelled so well in the ring that it quickly became the match of the night – during a night of really good matches. Styles hit a hurricanrana off the top rope to Bálor, but was unable to put him away. Eventually, Bálor was able to get the upper hand and hit the Coup de Grâce to get the victory. After the match, the two gave each other the “Too Sweet” gesture in a mutual show of respect, harkening back to their Bullet Club days.

Great showing by both, and it made sense for the Raw superstar to get the victory here.

Who wasn’t clamoring to see this match? During the course of the night, Elias was attempting to engage the audience in a concert but kept getting disrupted by flying produce… thrown by everyone’s best friend, Jason Jordan.

This led to a match between the two. A match that probably could have waited until Monday night. I’m big on Elias, though, so I didn’t mind this one too much. The ending was kind of wonky and it didn’t exactly make anyone look good. Jordan got the win with a small package in where there was a controversy if Elias’ shoulder came off the mat. It didn’t look like it did.

With the anticipating of Kurt Angle’s “Medal” theme hitting the arena speakers, some fans were upset that Angle came out with Dean Ambrose and Seth Rollins basically as Roman Reigns would. I didn’t think there would be anything different than that, but those fans that wanted to hear Angle’s theme blast throughout the arena would get their wish later on in the match. Stay tuned.

Angle was decked out in full riot gear like his brethren, which was an awesome spectacle. He didn’t really stay away from getting into action right away, but the beginning of the match was more of a feeling out process for him and his opponents. Not long after the match began, Ambrose and Rollins temporarily took out Kane and Braun Strowman with double splashes from the ladder onto the announce tables. Meanwhile, Angle got beaten up inside the ring by Miz, Cesaro and Sheamus. They were mocking The Shield by attempting a triple powerbomb, but Ambrose and Rollins prevented that from happening.

Shortly after, Strowman grabbed Angle outside of the ring and powerslammed him through a table. That resulted in medics taking Angle backstage for a respite with Miz, Cesaro, Sheamus, Strowman and Kane taking care of Ambrose and Rollins.

At one point during the massacre, Strowman and Kane started bickering, and that resulted in Kane punching Strowman from behind on the stage then chokeslamming him through a table next to the announcer’s table. That didn’t put Strowman down for good, though. Kane then grabbed the chairs that were set up to make the entrance ramp look better and pulled them down and they all fell on Strowman. Michael Cole exclaimed, “What is wrong with you!?” and it was the best thing ever.

But it wasn’t a face turn for Kane. He went after Ambrose and Rollins and double chokeslammed them both through tables. Strowman made some superhuman comeback after Kane’s attack, but the group wound up turning on him and throwing him in a dumpster. The dumpster then drove away with a wasted Strowman in tow.

Angle came out and swiftly got rid of Sheamus and Cesaro. Then he got into the ring and eventually was hit with a Skull Crushing Finale by The Miz after Ambrose and Rollins took out Kane and themselves for a brief moment. But Miz didn’t put Angle down, as he kicked out. Angle was able to lock in the ankle lock on Miz, but the Intercontinental Champion countered. But it was just a matter of time, as Rollins kneed Miz to the face, Ambrose hit him with Dirty Deeds and Angle hit him with the Olympic Slam. Then, the trio hit Miz with the triple powerbomb with Angle getting the pin.

The show ended with Ambrose, Rollins and Angle raising their arms in victory, with a huge smile on Angle’s face.

He talked about his return on Raw Talk on the WWE Network after the show.

• I didn’t think Asuka’s debut was hurt at all by the fact it wasn’t a squash match. She didn’t squash many in NXT, so I’m not sure why it was necessary for her to squash Emma. Maybe because it wasn’t.

• Mickie James had a good match with Alexa Bliss and I thought the interview after the match was well done and gave James a way to stay in the title picture, if not right now, in the future.

• Styles is an MVP. Flying to a pay-per-view from another continent and putting on a fantastic match with Bálor? He’s a gem.

• Strowman vs. Kane! Are you ready for this amazing feud?

• Give Elias some more mic time. Dude is hilarious. Jordan? Not so much.