WWE Hell in a Cell 2017: Kevin Owens walks away from hell … with help from an old friend 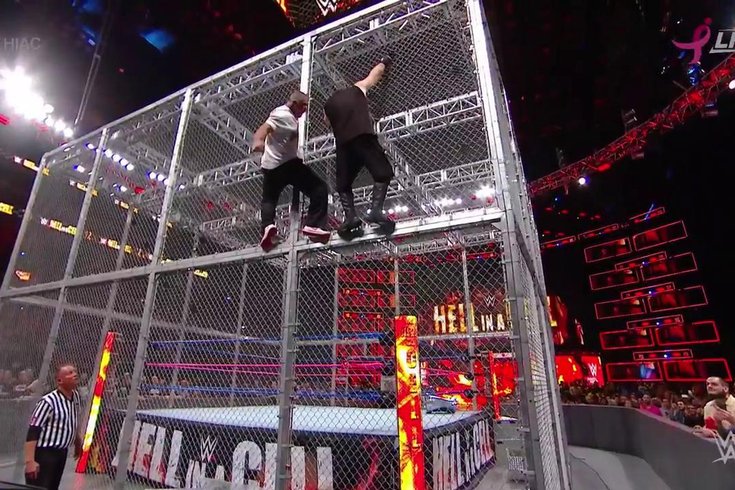 Kevin Owens and Shane McMahon hang from the side of the cage during the Hell in a Cell pay-per-view on Sunday night.

The Little Caesars Arena in Detroit had a little taste of hell Sunday night. Not actual hell, but WWE’s version. Hell in a Cell emanated from the aforementioned venue, hosting its first-ever WWE pay-per-view.

The card looked pretty good heading into Sunday night. Would the show deliver?

Chad Gable/Shelton Benjamin defeated the Hype Bros. by pinfall in the Kickoff Preshow

Benjamin and Gable won. No tease of a separation between the Hype Bros. after the match. Ho hum.

When someone thinks of previous Hell in a Cell matches – especially the ones in the early years – they think of the sheer brutality a match like this showcases. And that’s exactly what the Usos and the New Day brought to the Little Caesars Arena on Sunday night.

This match was as innovative as a Hell in a Cell match could get in 2017. With all the weapons introduced during this match, it was how each team used them that really told a great story.

Xavier Woods and Big E were the representatives inside the cell for New Day. One of my favorite spots was Woods keeping one of the Usos in the corner of the cell by placing kendo sticks in between the chain link fencing, trapping them. That was one of the best moments of the match.

And there were plenty more. I suggest if you haven’t seen the event yet, or even if you have, go back and watch that match again. It’s one of the better Hell in a Cell matches we’ll ever see.

The Usos won the titles for a fifth time, utilizing their double splash with a steel chair the second time around to get the pin.

This rivalry has fallen a bit flat, although it’s not for lack of effort. Rusev proclaiming it was “Rusev Day” a few weeks ago on SmackDown and Aiden English’s involvement gave us some entertainment in a good way. But, although Rusev got a win in this feud, which is basically being cast as a fluke, it’s basically been one-sided. Orton wins… all the time. And there was no difference Sunday night.

It wasn’t a bad match, but it definitely didn’t grip our attention like the opener did. To be fair, whoever followed that match would’ve fared the same result. In a pretty good sequence, Rusev played possum and played into Orton’s pounding into the mat when he’s getting ready for the RKO and almost was able to lock in the Accolade, but Orton countered that into an RKO for the pin.

Giving Rusev the win like that, and having him lock in the Accolade, would’ve been great. But alas, we just get another Orton victory. Ho hum.

During the Kickoff Preshow, Dillinger approached SmackDown general manager Daniel Bryan and asked to be added to the Styles/Corbin one-on-one match to make it a Triple Threat. Bryan obliged, for whatever reason [they didn’t really give one], to make it a three-way.

This was a pretty good match, although Dillinger’s involvement telegraphed an oncoming title switch. Corbin took to offense a good portion of the match, eventually being relegated to the outside thanks to Styles and Dillinger.

Styles would hit the Phenomenal Forearm on Dillinger, but Corbin rushed back in from the outside and gave Styles a few kicks that sent him to the outside – pretty hard, I might add – and stole the pin to win the United States Championship.

I didn’t think Flair was going to walk out of Detroit as the SmackDown Women’s Champion, but she did walk out a winner. Despite Natalya working her left knee nearly the entire match, which included locking her in the Sharpshooter but unable to make Flair tap, the champion grabbed a steel chair outside the ring and leveled Flair with it, causing the disqualification.

This almost certainly sets up a rematch between the two down the road, but for now, Natalya is still your champion.

I wasn’t sure why the general manager just didn’t ban the Singh Brothers from ringside before this match even started. But the ending of this match kind of pointed to the reason why.

Mahal’s not terrible in the ring, and Nakamura is Nakamura. But these matches haven’t been great by any means.

Maybe that’s not the point for this feud, but it still leaves a lot to be desired for me. Especially when we’re seeing the Singh Brothers get involved all the time. And they did once again Sunday night. But this time, the referee Charles Robinson decided he was going to throw those guys out.

The distraction allowed Nakamura to finally hit Mahal with the Kinshasa, but Mahal was able to grab the rope to break the count. Nakamura then countered a Kallas attempt, but a second Kinshasa attempt resulted in Nakamura running his knee right into the turnbuckle, allowing Mahal to hit the Kallas for the win.

Mahal has been WWE Champion forever. He may never lose again.

Ziggler pulled maybe the biggest heel move of his career by coming out to no strobe lights or theme music.

And the match was okay. Nothing special. Ziggler tried to win pulling Roode’s tights, but Roode did him one better and rolled out of it, but wound up pulling Ziggler’s tights to get the win.

Now that’s how to build a babyface.

Owens and McMahon started going right at it from the start, which was expected. Lots of big bumps took place inside the cage through the first half of the match. But then, Owens decided he wanted to go to the top of the cage and jump off right onto McMahon’s prone body on one of the announce tables.

It'd be a LONG WAY DOWN for @FightOwensFight... #HIAC pic.twitter.com/9e11LXSjU9

But he couldn’t do it. He even tried to get a running start, but balked at the edge of the cell. He yelled to the crowd, allowing McMahon to get up and climb the cage. This led to a large portion of the match taking place on top of the cell.

Many viewers were scared they’d somehow fall through the top into the ring. Luckily, they didn’t, but it wasn’t for a lack of big bumps. Eventually, Owens had enough of being on top of the cage, and decided to climb down. But McMahon was right next to him, and they both were hanging on the side of the cage until the SmackDown commissioner blasted Owens’ head into the cage, causing him to fall through an announce table.

But that wasn’t it. McMahon debated covering Owens for the pin, but he wound up heading to the top of the cage once again, ready to jump off the structure and obliterate the soul of his rival.

And Owens moved. But he had help. Owens didn’t move on his own.

It was SAMI ZAYN! Zayn helped move Owens off the table as McMahon’s body was furiously rushing down to the ground. Why, Sami? Why?

We may find out the answer to that on Tuesday night. But, for now, we’re left to wonder why Zayn pulled Owens’ lifeless body on top of McMahon to win the match. Ah, that Falls Count Anywhere stipulation came in handy.

Styles had some thoughts:

• I don’t know when WWE will decide that it’s time for Jinder Mahal to not be WWE Champion anymore, but they’re skating on thin ice by having him beat Nakamura time after time. Once it’s Nakamura’s turn, the fans may not buy it.

• Styles losing the U.S. Title is surprising, but it may mean a new feud is in store for him moving forward.

• Roode winning using heelish tactics? Are they turning him already?

• Will Zayn be full-blown heel? Will he be a tweener? He looked somewhat conflicted during his appearance in the main event. It’ll be interesting to see what this does for his character.

• The Usos vs. New Day is WWE’s Feud of the Year in my eyes.

• Flair vs. Natalya has the makings of being a great feud.

• Orton vs. Rusev may be the least interest I’ve been in a feud in a long time. It needs more Aiden English.