Make room on the Wentz Wagon for a couple of WWE Superstars.

The Bella Twins, Nikki and Brie, performed a rendition of the Eagles' fight song during their appearance Wednesday on NFL Network's Fantasy Live. 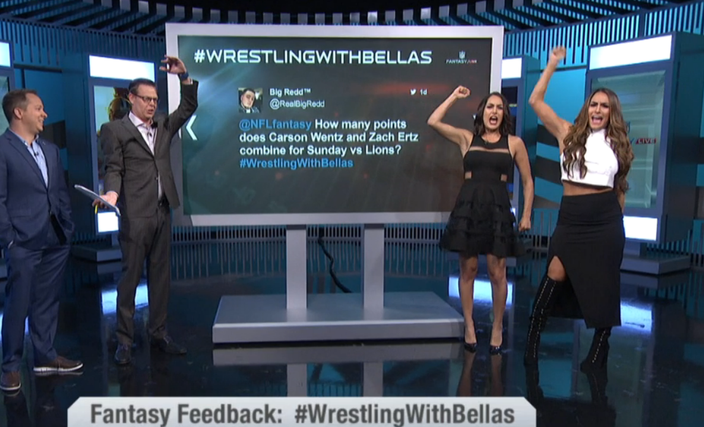 The show was soliciting questions on Twitter when one user asked how Carson Wentz and Zach Ertz were going to fare in Sunday's game against the Detroit Lions. The twins showed that they are high on the team's chances and started singing "Fly, Eagles, Fly."

One minor quibble is that the Bellas sang "watch those Eagles fly" instead of "watch our Eagles fly." Perhaps, the twins aren't completely sold on the team's outlook but there are still plenty of games remaining to win them over.

Like most Eagles fans, the Bellas didn't question the impossibility to "fly on a road." Clearly, they are diehard fans like they told philly.com in 2014.

The Bellas were promoting their new television show "Total Bellas" which airs on the E! Network.

Sunday's Eagles game is scheduled to kick off at 1 p.m. in Detroit.