'No one loves things as much as a 10 year-old,' says site's creator 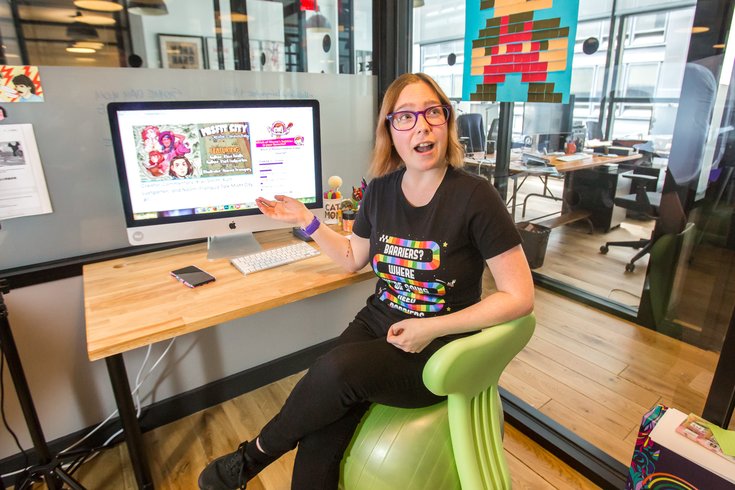 Creator of the 'YAYOMG!' website, Kelly Hofmann, is interviewed in her office at the WeWork coworking space in Center City Philadelphia.

Perched with impeccable posture atop a balance ball seat, on display in her glass-walled fishbowl of an office, Kelly Hoffman stands out in the muted world of shared work spaces.

A self-avowed tech nerd, Hoffman’s eye-popping office contrasts sharply with the industrial look of the rest of WeWork, a coworking space at 15th and Walnut streets in Center City Philadelphia.

Cover most flat surfaces with critters – imagine a breeding zoo for Hatchimals and figurines.

Hoffman, her self stands out too, her hair often sporting silvery strands of tinsel, as she works on her blog: YAYOMG!

Tween girls, ages 8 to 12, are the the sweet spot for her work, which covers “everything that encourages young girls to laugh out loud, feel empowered, express themselves, and discover who they are.”

“They are amazing, learning who they are. No one loves things as much as a 10 year-old,” explained Hoffman, who is 32-years-old – going on 12. 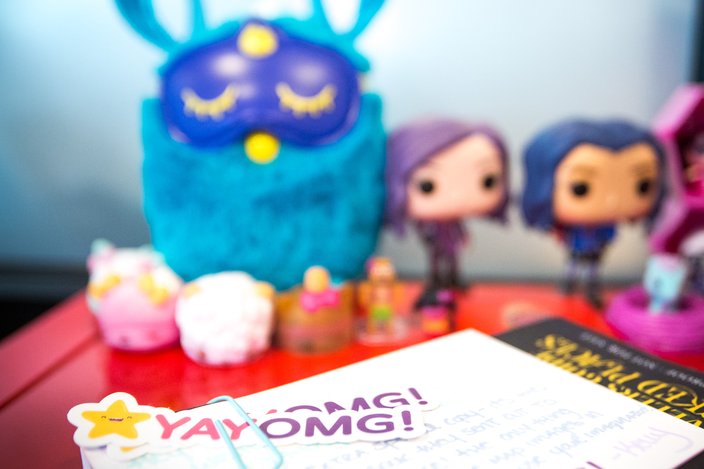 In a shared coworking space with glass walls, it's easy to see that the 'YAYOMG!' office isn't your typical Center City business. Furbys, Hatchimals and dozens of figurines line most horizontal surfaces.

“I was a very weird tween. I liked Barbies and dinosaurs. I liked pink and frilly … and I was interested in science.”

By the age of 12, Hoffman was spending more time building websites than she was negotiating middle school cliques, the bane of unconventionality.

“I was made fun of all the time,” she recalled, adding the small circle of female friends she made at the age of 12 are still her closest friends 20 years later.

Which brings us back to YAYOMG! Hoffman sees her digital creation as a way for tweens to connect with their passions.

“Tween girls are some of the most passionate kids out there. When they connect to something, they cling to it with unwavering passion," Hoffman said. “They draw pictures of it, write stories about it, and tell their friends, parents, and anyone else who’ll listen every small detail.

“They crave more information and more opportunities to make that thing their own and learn more about it,” she continued. “I wanted to give girls a place where they could find that next thing to love or engage with the things they already do."

She sees her business, which started as a sideline, as filling a void in an age niche not well-served online.

There are also interviews with “awesome girls,” such as ViviAnn Ye of the recent movie Baby Boss and JoJo Siwa of Nickelodeon.

In Ye’s interview with Hoffman, she told YAYOMG! she dreams of being an actress while also practicing dermatology – and curing eczema.

Those are tall orders, but then that’s part of the no-limiting-boundaries approach favored by Hoffman.

Largely self-taught, Hoffman previously spent eight working years “building and growing two tween-girl focused social networks” for tiny company later bought by a small company, meaning she got to do most everything in digital formatting.

“I learned every single important thing I know from those incredibly trying yet incredibly fruitful times,” filled with 12 to 16 hour days, Hoffman said. “I still absolutely loved the work because I was being creative and thousands of kids were enjoying the end result.”

YAYOMG! began as a way to “blow off steam.”

But the pigeonholing of her target audience as tiaras and pink exclusively made her want to do more, which meant striking out on her own.

She realized while tiaras and pink are cool, that isn’t right for every tween girl.

“What about the girls out there who are something else entirely, girls like me and girls who are different than even my own idea of what a girl should be?" she said. “Those are the girls that have always inspired me to keep going. Every girl is a unique and magical individual who should be celebrated and encouraged. Girls are dynamic. That’s why it’s important to me to cater to all types of girls."

Explained an 11-year-old site fan, Bethany: "I think YAYOMG! is an awesome place to have fun. You can do everything from winning a book to watching a movie trailer and it's all the kind of things that my friends and I like." 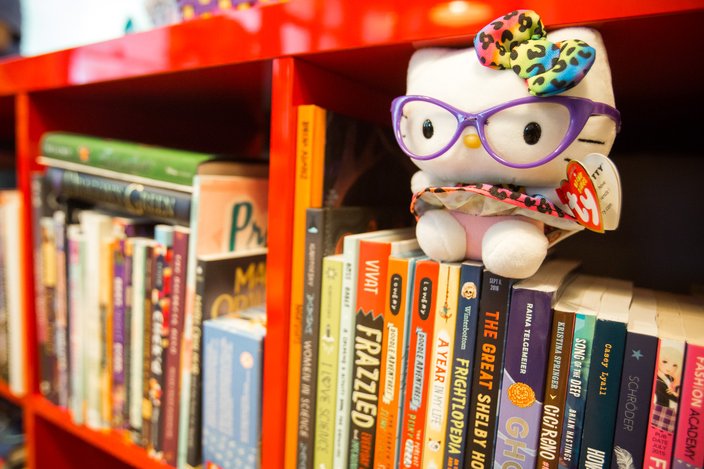 The 'YAYOMG!' office is filled with books, toys, and figurines that have been reviewed on the website making the room resemble a cross between a kids playroom and an office.

The site is nearing two years old “and finally starting to become what I intended for it to be. A place where girls can connect with the things they love, learn about new things they may not have heard about anywhere else, and a place that inspires them.”

“I don’t want to just be the place where you can hear about what JoJo Siwa wore to the Kids Choice Awards, I want to tell you about how she designed that outfit herself and how hard she works at just 14." Hoffman said.

“We often don’t realize that the silly things we’re passionate about when we’re younger can really shape where we end up We often lose that as we become adults, and I’m often considered “weird” I’m not all wine and yoga and kale and babies and dinner parties, like other people in their 30’s," she said. “I’ve never fit in, I’ve never been the same as everyone else, and I’ve never been ashamed of it, a message I’m hoping to share with my readers.

“It’s a infinity percent okay to be your own rainbow, your own individual you, whatever that may be." Hoffman said. "I want YAYOMG! to be the cool place you can escape to be the version of yourself you need to be, even when the world keeps telling you no.”