Most yoga classes are filled with women, but men can benefit from it too 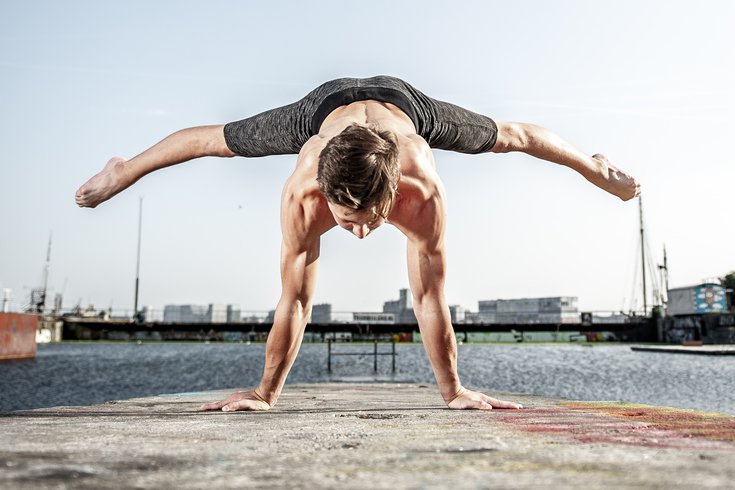 About 72% of yoga practitioners are women, but the number of men interested in the practice has grown.

Because yoga has become feminized in American culture, with social media filled with women in bendy poses, many men don't realize the practice has a lot of benefits for them, too.

About 72% of yoga practitioners are women and 28% are men, according to the 2016 Yoga in America study, but the number of men interested in the practice has been growing.

Yoga is an ancient practice that originated in India and involves a combination of physical poses, mindfulness and deep breathing. Today, there are many different types of yoga from the more physically demanding Vinyasa yoga to the more meditative Yin yoga.

In particular, the more basic yoga poses, called asanas, can help men increase their strength and flexibility. But there are many reasons why men should consider doing yoga. Here are eight of them:

One of the biggest myths about yoga is that it is easy and not a real workout. Anyone who has taken a yoga class knows that even the more gentle types of yoga cause people to work up a sweat.

Many athletes, including professional football and basketball players, have incorporated yoga into their workout regimens to increase their flexibility and mobility and to reduce their risk of injury.

Yoga forces people to focus on all muscles in the body, even the often overlooked ones in the feet and neck. This makes it easier to spot any imbalances that might lead to future injury or joint pain.

It also is good for body strength and conditioning. Certain types of yoga, such as Vinyasa are more strenuous than others, but the repetitive movements in all yoga practices tone the body and lengthen the muscles, experts say.

A study published in the International Journal of Yoga found that athletes' overall performances increased when they incorporated yoga into their regimens.

High levels of the stress hormone cortisol can elevate blood pressure, increase inflammation in the body and weaken the immune system. They also can increase blood pressure and interfere with thyroid function.

Men who internalize stress might benefit from regularly practicing yoga, research shows. It teaches people to respond better to stressful situations by focusing on heart rate, blood pressure and breathing.

It also can reduce the body's inflammatory response to stress which can lead to serious health problems such as high blood pressure, heart disease, obesity and diabetes. A study published in the journal Frontiers in Immunology found yoga helps suppress the activation of genes that cause inflammation.

According to the National Center for Complementary and Alternative Medicine, a branch of the National Institutes of Health, yoga also can reduce depressive symptoms.

Yoga has been shown to improve focus, productivity and creativity. A study in the Journal of Physical Activity and Health found that 20 minutes of Hatha yoga, a form that includes breath, body and mind, stimulates the brain more than walking or jogging on the treadmill for the same amount of time.

People who practice yoga have better sleep quality than other people, according to one 2013 study. The study participants not only woke up less often in the middle of the night, but it took them less time to fall asleep.

By reducing stress and increasing body strength and confidence, yoga has been shown to have a positive effect on people's sex lives. It also increases blood flow to the genitals and boosts arousal.

A study published in the Journal of Sexual Medicine found that men who practiced yoga for 12 weeks had improved scores on desire, performance, ability to control their ejaculations and orgasms and overall satisfaction with sex.

For men stuck in desk jobs all day, yoga can improve overall posture. In a Journal of Strength and Conditioning Research study, performing hot yoga for eight weeks was associated with better flexibility of the lower back, hamstrings and shoulders.

A study published in the Journal of Physical Therapy Science, also suggests that a program of intense, short-term yoga posture sessions can be more effective at improving spine mobility than other exercise programs.

According to Harvard Health, yoga turns people into more mindful eaters, which improves weight loss and maintenance because they are more aware of their body's natural hunger cues and can better recognize when they are full.

In a few small studies, yoga has been found to have cardiovascular benefits as well. It improves blood pressure and lowers blood sugar levels in people with diabetes.

8. A better quality of life

While yoga can improve the quality of life of all its practitioners, a new study published in the journal Prostate Cancer and Prostatic Diseases suggests that it is especially helpful for men newly diagnosed with prostate cancer.

A prostate cancer diagnosis is associated with a higher risks of depression, anxiety, heart attacks and suicide. But when these men are enrolled in a yoga program while waiting for surgery, their overall quality of life improves, including less fatigue and improved sexual function, the study found.

Data showed that these men also had a stronger immune response and lower levels of inflammation than the men who didn't take yoga while waiting for surgery. Over a six-week period, the men in the yoga group took class twice a week for 60-75 minutes.

Of course, as with any type of exercise, yoga carries a risk of injury. Men are at a higher risk of more serious effects including cervical fracture, stroke and nerve damage, especially from certain yoga positions such as shoulder stands and plow.

Overall, yoga is considered low-impact and safe when practiced under an experienced instructor, the National Institutes of Health says.

Yoga experts emphasize that there are beginner and more advanced poses that make yoga approachable for everyone. Participants can address any concerns about past injuries or physical limitations with their instructors. Experts say they shouldn't insist on trying each pose immediately, but instead give their bodies time to adjust as they master each pose.