Feel like rolling down a hill in a giant ball? Try zorbing 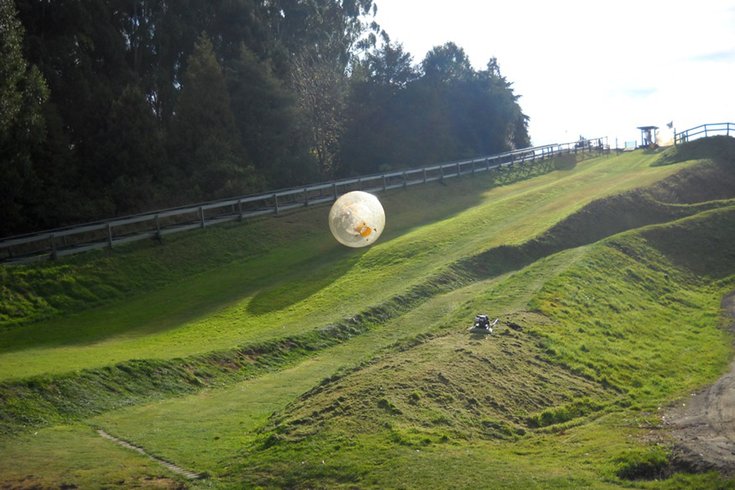 A zorb rolls down a slope in Rotorua, New Zealand.

If crawling into a giant hamster-shaped ball and being rolled down a hill sounds appealing, you, my adventurous friend, might want to try zorbing.

Also known as sphereing, globe riding or freeballin, zorbing was created in the 1990s in New Zealand and soon made its way to Europe and, eventually, the U.S.

The Oxford English dictionary officially added zorbing to its vocabulary list in 2001, defining it as “a sport in which a participant is secured inside an inner capsule in a large, transparent ball which is then rolled along the ground or down hills.”

Riders can zorb down a gentle slope or on a level surface, as well as in water or on the snow.

There are currently only a few places in the country where you can partake in the thrilling activity, and lucky for you, one of them is right here in Pennsylvania.

Ski Roundtop in Lewisberry, York County, offers harnessed and unharnessed zorbing in its OGO Balls. Unharnessed zorbs are filled with water to prevent people from flipping over. Up to three people can participate as long as the weight does not exceed 550 pounds. Harnessed zorbs are for single riders of no more than 275 pounds.

Zorbing is included in the resort’s $39 “Adventure Package,” which allows visitors to zorb as many times as they want as long as the park is open. It also includes the resort's other activities like ziplining, bumper boats and scenic canopy tours.

Spectators are welcome at no charge, so your unadventurous friends can watch you in action for free.

Ski Roundtop is about a two-hour drive from Philadelphia. If you feel like taking a longer road trip, you could head to Amesbury Sports Park in Massachusetts.

If you don't feel like being rolled down a hill, you could also try body zorbing. Apparently that's a thing.

Have you tried body zorbing? You can at After Prom! pic.twitter.com/YfOwJsAPXr