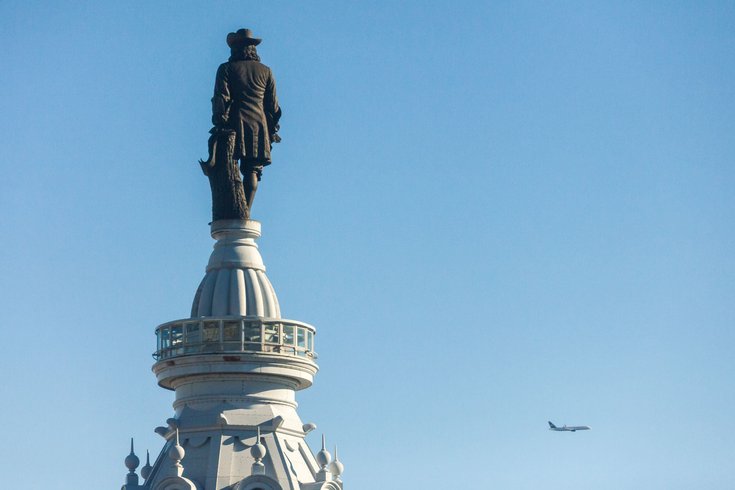 The William Penn statue stands atop City Hall in Philadelphia.

Billy Penn is taking a bath, but he won't get it during April's showers.

The cleaning of the iconic William Penn statue atop City Hall originally was scheduled for April. But once city officials realized that'd mean it would take place during the much-hyped NFL Draft in Philadelphia, they rescheduled.

Local paparazzo HughE Dillon pointed out on Twitter on Tuesday that cleaning it this month would mean covering the William Penn statue with scaffolding during an event that could draw upwards of 150,000 visitors to the Benjamin Franklin Parkway from April 27-29.

RELATED: Philly bracing for 2017 NFL Draft; what to expect around venue

"I used his photo to blast the City on why would they put the scaffolding up during the NFL Draft,"  Dillon wrote in a Facebook message. "Why would anyone want to cover up beautiful William Penn during one of the most photogenic events on the Parkway in our City?".

It's unclear if it was Dillon's tweet that initially alerted officials of the conflict. City spokesperson Ajeenah Amir did confirm to PhillyVoice that the date has been moved to May 1 because of the hoards of NFL teams, draft prospects and football fans coming to town.

"It was scheduled for April, but when this issue was bought to our attention, we were able to reschedule," Amir said in an email.

Dillon, who's not shy to egg the city on about its event planning, said he was pleased officials had changed the date, considering how symbolic the 36-foot tall, 53,000 pound-statue is for Philly.

"We're having the NFL DRAFT here in Philadelphia, on the Parkway, he's the backdrop," Dillon wrote, noting that last time the statue was cleaned, the observation deck was closed as well.

The statue, which honors the city’s founder, last had a makeover in 2007. It was supposed to get its bronze cleaned early last fall, but that was delayed until spring because the restoration process needs warm weather, Philly Curbed reported at the time.

Amir said the cleaning is expected to take about six weeks.