This week, all week long, we took a brutal look at each of the teams in the NFC East, in detail, and my email inbox is now loaded up with hate mail. In case you missed those, you can catch up here:

Many of the whinier Cowboys, Giants, and Redskins fans implored, "Why don't you do this for the Eagles too?!?"

1) The corners, my God, the corners

As we noted after the Eagles released CB Leodis McKelvin earlier this offseason, the Eagles will have their ninth different starting cornerback combination in 11 years in 2017:

Jalen Mills was a seventh-round rookie a season ago. He had some decent moments, but did not produce any turnovers. In coverage, there was a lot more bad than good, as Mills was susceptible to the deep ball. 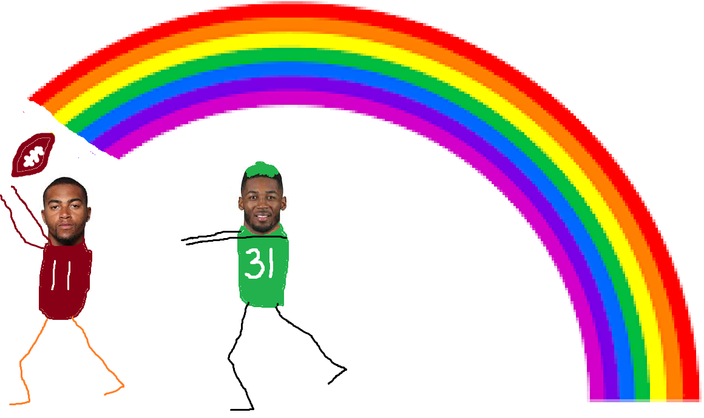 Heading into 2017, it is expected that Mills will be better, but he has a long way to go before anyone could consider him an ideal starter. Meanwhile, Patrick Robinson, who turns 30 in September, was a Band-Aid signing.

The Eagles did grab a pair of corners on Day 2 of the 2017 NFL Draft, one of whom was Sidney Jones, who was a potential top 10-15 pick had he not ruptured his Achilles at his Pro Day. The other, of course, was Rasul Douglas, a bigger corner with good instincts and ball skills, but 4.59 speed.

The Eagles may have some answers long-term at corner, but even with some of the uglier CB combinations in the chart noted above, 2017 might be the Eagles' scariest (in a bad way) situation at corner heading into a season.

2) The Eagles have almost no reliable depth on defense

When you look at the Eagles' depth chart on defense, it looks something like this:

The corners aside, that's not too bad, right? The defensive line looks good, starting linebackers look good, safeties good. They're all set.

OK, now put your hand over the starters, and here's what you get: 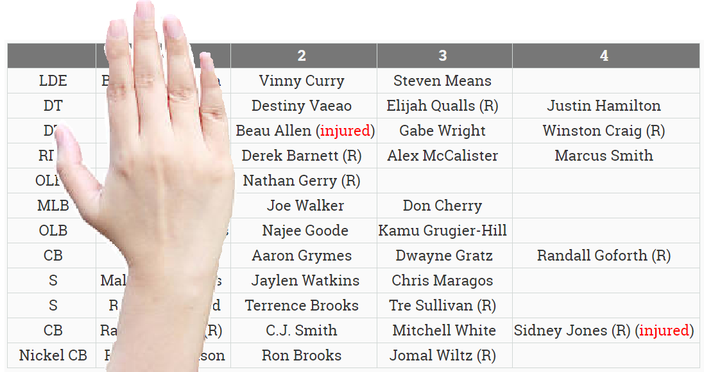 Ew. The only place on the defense where the Eagles have good depth is at defensive end. The rest is very ugly.

Well, so what? It's just depth, right? That's not that important. Oh really? Here's how many Eagles defenders played at least 200 snaps the last 5 years:

The above numbers were on teams that have stayed remarkably healthy (we'll get to that a little later). So yes, depth, especially on defense, is kind of important, and the Eagles don't have it.

3) The receivers are better, but let's tap the brakes a bit

The Eagles most definitely improved their NFL-worst receiving corps of a year ago with the free agent acquisitions of Alshon Jeffery and Torrey Smith, but they are most certainly not among the "top (fill in the blank of whatever your Eagles fan friend has unrealistically ranked them)" in the league.

• Jeffery is very talented and has put up big numbers in the past, but he also comes with some injury and suspension concerns.

Some quick notes on the above video:

Chip Kelly's stale offensive scheme was fooling nobody, and the Niners' quarterbacks stunk. So there were certainly some things working against Smith.

That said, that excuse only goes so far. Smith was fifth on his team in receiving yards, and his play, regardless of the players around him, was bad. He has a lot to prove this season.

• Jordan Matthews is a nice slot receiver, but that appears to be his ceiling.

• Nelson Agholor's first two seasons in the NFL were atrocious, but after a decent (and I stress decent) spring, people are putting him in the Hall of Fame. Agholor suddenly being good is wholly unrealistic.

• The rest are rookies, unlikely to contribute much to the regular offense in 2017, but of course, we'll see.

As a workhorse for the Patriots a season ago, LeGarrette Blount racked up 299 carries for 1161 yards (3.9 YPC) and whopping 18 TDs. But, as should be noted, that was with the Patriots, so numbers can be skewed. The Pats made little effort to bring Blount back.

With free agency and the 2017 NFL Draft in the books, one of the Eagles' remaining glaring needs heading into the regular season was a running back who could run in between the tackles and pick up first downs on short yardage. The Eagles drafted the diminutive Donnel Pumphrey in the fourth round of the draft, but with Ryan Mathews still almost certain to be released whenever he passes a physical, here's a look at the Eagles' top three running backs looked, in terms of size, prior to the Blount signing:

Blount makes sense as a complementary big back to the Eagles stable of smaller, shifty runners, and he was especially good last season in third- and fourth-and short situations In that sense, the Eagles have a committee of backs who can maybe get the job done this season.

But make no mistake that Doug Pederson would prefer a three-down back who can run inside, run outside, catch, and pass protect. He doesn't have that.

5) Carson Wentz has some significant quirks to fix

In his rookie season in the NFL, Carson Wentz did a lot of encouraging things. He showed arm strength, mobility, toughness, leadership qualities, and smarts. That's a good start. However, one of the most important traits for an NFL quarterback, accuracy, was an issue at times. More specifically, Wentz had a propensity to sail passes over the heads of his receivers.

Someone by the name of "Jeff M" (via Eagles reddit) put together a coaches film video of Carson Wentz's 14 interceptions last season. Thanks for doing the legwork, bud. Anyway, it's an interesting look and something of a microcosm of where Wentz needs to improve as a passer.

As you can see in the above video, Wentz's interceptions were due to a mix of bad decisions, bad receivers, and bad throws, most of which were sailed over the heads of his receivers, leading to gift picks for opposing safeties.

You don't have to be a quarterback coach to observe Wentz's issues with high throws. It's something that was easily identifiable during training camp a year ago, and it continued throughout the season.

It has also carried over into spring practices this year. That's a quirk that you do not want to be Wentz's "thing," like throwing worm burners was for Donovan McNabb. 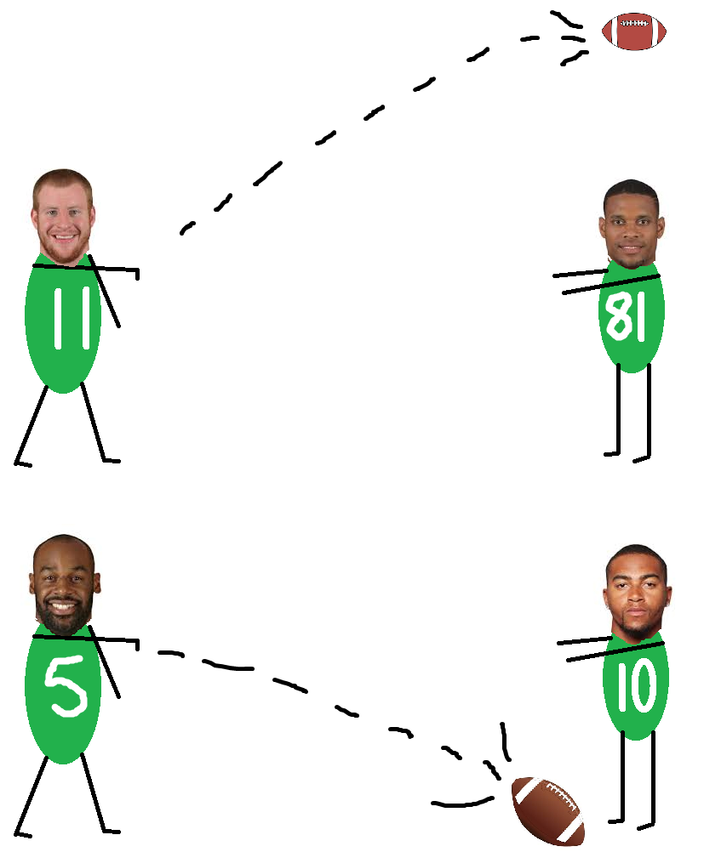 If Doug Pederson could find a way for McNabb and Wentz to have a baby, he or she would be the most accurate passer in the history of the Universe.

All NFL quarterbacks get criticized, often for dumb reasons, and Carson Wentz (#AirYards!) is no exception. However, the sailed throws are a very legitimate concern. 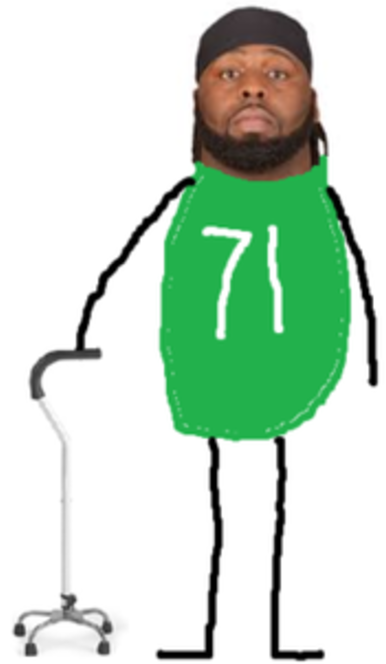 Yes, I know you already know that Jason Peters is old, but you may not realize exactly how old he is for someone playing his position.

You have to go all the way back to 2001 to find a player older than Peters who started at least 10 games at left tackle in a season. That would be Lomas Brown, who started at LT for the Giants at the age of 38.

Jason Peters is a Hall of Famer. Well, he should be anyway, but who the hell knows when these morons are voting Morten Andersen in over Brian Dawkins. Peters also had a good season in 2016, and the Eagles have placed a high priority on keeping him as fresh as possible.

Still, we are in uncharted waters in terms of a LT playing in this modern NFL at Peters' age. At some point, his play is going to fall off drastically. Father Time is undefeated. As long as Peters keeps playing, his rapid decline is going to happen at some point, and the possibility certainly exists that it can happen in 2017.

About a week ago, Jonny Page of BGN took a look at all of Carson Wentz's fumbles in 2016. Five of them came via bad shotgun snaps by Jason Kelce. Luckily for the Eagles, Wentz was able to bail out Kelce on all five occasions.

OL coach Jeff Stoutland acknowledged that the bad snaps were an issue in an interview a few weeks a ago.

"I think he’s improved with that during the spring. I really mean that. I think he’s been much more accurate. I think sometimes… Have you ever snapped the ball? (Reporter – me, actually – “Nope.”)

"We take it for granted, but when you have the ball in your hand and the defense is crowding the ball as much as they can, everybody else on the line can move back and legally get to the belt buckle of the center, creating a neutral zone. The center does not have that. So for him to be able to block a man who’s crowding the ball and is probably offsides most of the time, snap the ball, and then block him efficiently, that’s a hard job. You better have somebody who has quick feet and they’re explosive.

"I think that sometimes he tries to get there so fast, but you have to take care of the ball first. So there are so many things involved with that. But that’s a hard job."

I think outside observers take shotgun snaps for granted because most centers don't struggle with them. 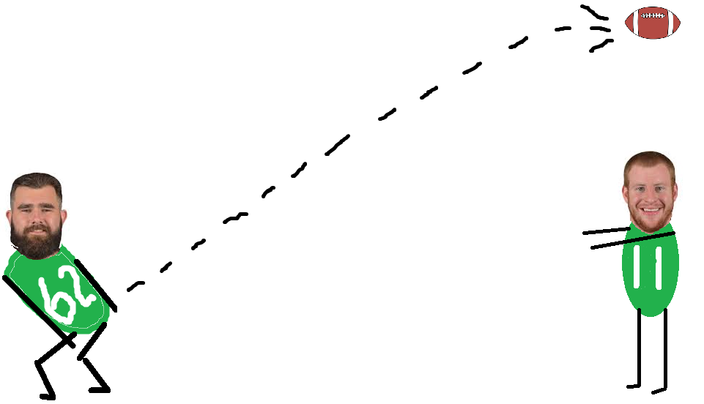 The Eagles were lucky to not have any of those five bad shotgun snaps bite them badly last year. If they don't improve, it's unlikely their luck will continue.

In the NFL, it can be debated which is the more important thing to have, a great quarterback, or a great head coach. Ideally, you have both, obviously. Yes, this is high-level analysis.

At the quarterback position, I think you're always continuing to look for your answer until you think you have someone who already is, or can be, a "top 10" type of guy. Logically, maybe the same can be true of a head coach, although switching out head coaches isn't exactly as easy as switching out a quarterback, as the former entails implementing new schemes and finding new players who fit them.

Personally, I thought Doug Pederson had a decent rookie season as a head coach, and think some of the over-criticism of him in the Philadelphia region can often border on ignorant.

That said, Pederson hasn't exactly shown that he is (or will be) a "top 10" type of head coach yet. While it wouldn't be prudent to have a quick hook with Pederson, his second year in the NFL is a huge one in terms of proving himself.

9) The Eagles have stayed remarkably healthy and haven't capitalized

Last season, the Eagles stayed healthier than any team in the NFL, according to this chart via "Man-Games Lost." 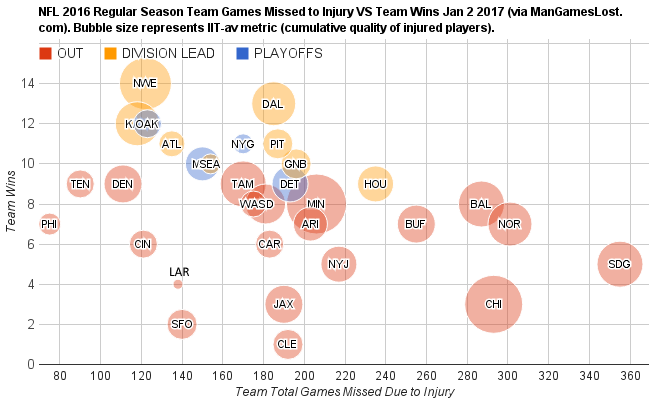 That's nothing new. Since Chip Kelly's arrival in Philadelphia (or perhaps more accurately, Shaun Huls' arrival), the Eagles as a team have not suffered many injuries. Maybe that's not just luck, or maybe it partly is. Either way, they've stayed healthy, and still couldn't win.