This week, all week long, we took a 100 percent vitriolic look at each of the teams in the NFC East, in detail, while ignoring the positives. The first target on Monday was the Dallas Cowboys. On Tuesday, we roasted the Washington team. On Wednesday, we focused on Dave Gettleman's insistence on destroying the Giants. On Thursday, we poked a little fun at the rest of the NFC.

Today, we'll finish off the series with the Philadelphia Eagles.

1) Can Carson Wentz finish a season worth finishing?

You all knew this would be the first one, but to recap, Wentz has had four significant injuries since 2015.

Should we look at all his injuries? Sure, why not. Here's the play where he broke his wrist (2:21 mark). You can't actually see the hit here. There are no replays in the cutup, probably because Wentz got up, kept playing, and finished the game:

Here's the shot he took in the ribs:

You've all seen the ACL/LCL tear:

As for the fracture in his back, my regular readers have heard me laugh at this in the past, but I love the way the Eagles fessed up that Wentz was hurt. The Eagles normally reveal nothing about injuries, unless they absolutely have to. And yet, on the morning of Dec. 12, 2018, knowing that reporters would surely notice that Wentz wasn't practicing, Doug Pederson just decided to slide in during a pre-practice press conference that Wentz wasn't 100 percent, but it wasn't a big deal. Lol.

"Good morning," he said. "So before you ask, I'm going to run down the injuries for you for today. That way I don't have to go through every single one of them."

Oh what a treat!

"Saves a lot of questions," Pederson acknowledged. "So let's start with the defensive line: Tim Jernigan; he's doing better. Obviously, day-to-day. We'll evaluate him today and see where he is.

"You know about Corey [Clement], Josh [Sweat], Jalen [Mills]. Made those decisions to put them down [to injured reserve]. Avonte Maddox is improving. Again, he's day-to-day. See how he gets through today, and there is a chance he practices, but, again, we'll see where he is physically.

"Jordan Hicks, another one that's improving. Still day-to-day. See where he is again after today and tomorrow with a couple of workouts.

"A new one: Carson has a little bit of back soreness, a little tightness, so we're going to rest him today. Continue to evaluate him and make sure he's good. But we'll have more information on all these guys later in the week.

"Is there anybody else?"

Is there anybody else. Lol.

MORE: 10 reasons the Cowboys will be a dumpster fire this season

In 2017, with Wentz done for the season, Nick Foles led the team to a Super Bowl win. In 2018, after he went down, Foles guided the Eagles to the divisional round of the playoffs. 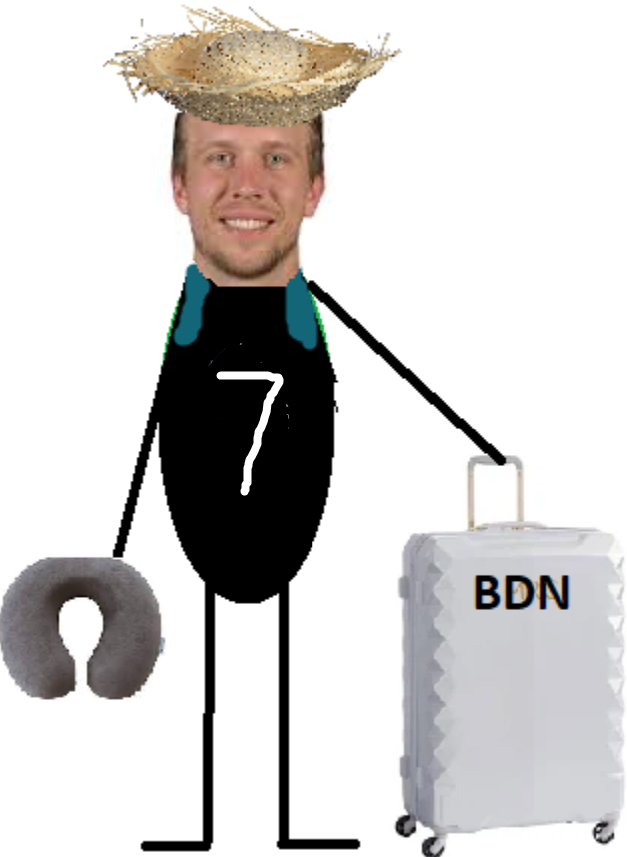 The Eagles' new No. 2 is Nate Sudfeld, who the team has been grooming for two years after the Washington team waived him at 53-man cutdowns in 2017.

A couple weeks ago, Tim McManus of ESPN first reported that the Eagles were shaking up their medical staff. And with good cause! All season long, Eagles players were on the shelf longer than expected, or they suffered recurring injuries, seemingly because they returned from injury too soon.

The Inquirer's Jeff McLane did a good job of rounding up all the players with questionable circumstances related to the medical staff:

Carson Wentz’s back injury was the most notable abnormality. The Eagles shut him down in December, after they revealed he had a stress fracture. The quarterback first popped up on the injury report with a “back” injury in October, but he didn’t miss a game, even though several players said Wentz was playing in pain.

Running back Darren Sproles and cornerback Sidney Jones missed significant time with recurring hamstring injuries. Wide receiver Mack Hollins said he would play in the season opener after having offseason sports-hernia surgery, only to be placed on injured reserve. On Tuesday, he practiced in public for the first time since last year.

Jalen Mills’ foot injury in November was deemed minor by coach Doug Pederson, but a few weeks later he was spotted in a walking boot and eventually placed on IR. He has yet to practice this offseason.

Running back Jay Ajayi tore the ACL in his left knee in September, but he was was outfitted with a brace in the second half and kept playing. Ajayi is an unsigned free agent.

Defensive tackle Tim Jernigan missed the first 10 games with a back injury, but after playing in one game, he experienced back spasms and missed three more games.

Defensive end Derek Barnett missed a game with a “shoulder” injury but returned to play in two games. The injury turned out to be a torn rotator cuff that required season-ending surgery. Barnett has not practiced this spring.

Well, then he added crutches. Then he had one of those Roll-a-Bout things.

The following players did not participate either at all during spring practices, or they were missing due to injury when the team's final mandatory minicamp wrapped up:

MORE: 10 reasons the Giants will be a dumpster fire this season

Going from Bennett to Curry is a downgrade, and there's no obvious "feel-good about it" candidate to take over Long's role. Sweat appeared to be in the lead for the No. 4 DE spot during spring practices.

In Jim Schwartz's scheme, it is imperative that the front four is able to get to the quarterback without the aid of blitzers. It is also important that there is quality depth along the defensive line, as Schwartz likes to rotate them heavily. The Eagles will still be able to get to the quarterback when Graham and Barnett are in the game, but the combination of Curry and someone from the "maybe they show something" group of Sweat, Shareef Miller, Daeshon Hall, and Joe Ostman could be a significant liability when they go in for their line shifts.

Bennett and Long combined for 15.5 sacks last season. Granted, that was partly because Bennett became a starter when Barnett went down, but that is still a hell of a lot of production to replace. If Graham or Barnett go down, the Eagles' pass rush from the edges could be in serious trouble.

6) The pass defense was often bad last year, and not just when street free agents were brought in

The Eagles were 30th in the NFL in pass defense last year, and part of the reason why was because they racked up an absurd number of injuries. The five corners on the roster at the start of the season in 2018 -- Jalen Mills, Ronald Darby, Sidney Jones, Rasul Douglas, and Avonte Maddox -- missed a combined 35 games. On top of that, at safety, Rodney McLeod, and his replacement, Corey Graham, missed a combined 18 games.

As a result, the Eagles were forced to start guys like Chandon Sullivan and DeVante Bausby during the season, and they predictably got lit up like a Christmas tree, notably by the Saints and Cowboys. So to some extent, you can hand-waive away the Eagles' troubles against the pass last year, however, they weren't exactly awesome before their corners and safeties started dropping like flies.

For example, the Buccaneers, the Titans' garbage passing offense, and the Vikings all had their way with the Eagles' secondary early in the season. Mills in particular gave up big plays to all three of those teams.

And if your response is, "Well, Mills might lose his job this season to (fill in the name of any other corner on the roster)," then you haven't been paying attention to Schwartz's unrelenting love for him.

7) The loss of Frank Reich was felt last season

The Eagles were down in just about every offensive metric you want to find when you compare 2017 to 2018. Of course, that was expected, seeing as Carson Wentz was an MVP candidate in 2017, and he was still recovering from a torn ACL/LCL in 2018 (not to mention playing through a fractured bone in his back).

Still, that doesn't excuse the Eagles' anemic first quarter offense last season, when they script their plays after a long week of game-planning. A comparison of first quarter scoring from 2017 to 2018:

There is zero question that the Eagles missed the contributions that Frank Reich provided in 2017, and his replacement, Mike Groh, still has plenty to prove.

MORE: 10 reasons the Washington team will be a dumpster fire this season

The Eagles' running backs will be better in 2019 than they were in 2018. Of course, that's not exactly a high bar, considering that they arguably had the worst set of backs in the NFL last year. Hell, their leading rusher was Josh Adams, with 511 yards, who was dreadful in chain-moving opportunities. For example, in seven carries on 3rd or 4th down and 1 or 2, Adams had -8 yards, and no first downs. Ew.

This offseason, the Eagles invested in the position, trading for Jordan Howard, and drafting Miles Sanders in the second round.

• A rookie camp aside, Sanders missed the entirety of spring practices with a hamstring injury, which wouldn't matter much for a veteran player, but absolutely does for a rookie with question marks in pass protection, fumbling, and receiving.

• Corey Clement still hasn't practiced yet after suffering an unclear knee injury in 2018.

9) Some of Carson Wentz's teammates bashed him anonymously

Back in January, PhillyVoice published a sourced column by Joe Santoliquito in which teammates painted Wentz as 'selfish,' 'uncompromising' and 'playing favorites.'

It was, um, criticized harshly. Hell, I didn't even write the damn thing, and I caught a ton of shrapnel for it. I can only imagine the blowback that Joe received. To note, I do fully understand the varying reasons readers took issue with the column.

Personally speaking, I had a unique perspective as that day unfolded. It was interesting to watch as there was no response to the column from anyone directly affiliated with the team for literally hours after it was published, and then, BAM, all of a sudden, one player after the next (mostly the best players) were offering messages of support on social media for Wentz in close succession, as the team likely nudged them to do so. Kudos to them on that one, as it provided all the evidence that most in the fan base wanted to hear that there were no in-house issues to speak of.

Kudos to Wentz as well, who handled the adversity like a champion, answering questions about the piece head-on, and even acknowledging that he can be a better teammate behind the scenes.

Still, say whatever you will about that piece, but the fact remains (and yes, it is indeed a fact) that some of Wentz's teammates bashed him anonymously to the press, and it can happen again if the season has its rocky moments.

The Eagles have never won a Super Bowl in a season in which they had fewer than two training camp practices open to the public.

MORE: Boom roasted: Poking fun at the rest of the NFC's teams