This week, all week long, we're taking a brutal look at each of the teams in the NFC East, in detail. On Monday we started the series off with the Cowboys. Today, we'll roast the Washington team.

To note, we will not be talking about the positives of any of the Eagles' NFC East rivals, because, well, that's no fun. This will be 100 percent vitriolic. And yes, we'll try to torch the Eagles as well at the end of the series.

For 10 seconds of fun, play/pause the following gif to see which Washington QB of the last 2 decades you would trust to put a TD on the board to prevent a shutout with a 40-0 deficit.

In 2019, unless McCoy starts all 16 games, first-round pick Dwayne Haskins or free agent acquisition Case Keenum will start at least one game this season, making it a nice round number of QB No. 20. My guess would be that both of them will get a start at some point, if I know this team like I think I do.

All three of those quarterbacks are screwed.

Why? Well, McCoy and Keenum are career backups, or at least they should be, while Haskins is, you know, a rookie, and one with only one college season as his team's starter. In fact, as the following tweet from Jordan Reid shows, Haskins will join Mark Sanchez, Cam Newton, and Mitchell Trubisky as the only quarterbacks drafted in the first round with 15 or fewer collegiate starts:

Since 1973, 100 QBs have been drafted in the first-round. Cam Newton, Mark Sanchez, and Mitchell Trubisky are the only 3 who have made 15 or fewer collegiate starts.

Dwayne Haskins will be the next.

Sanchez, Trubisky, and Newton combined for 40 TDs and 44 INTs as rookies, and their teams went 18-25 in games they started.

So, while Haskins may eventually develop into a good quarterback in the NFL (we'll see), it's not happening this season, with Washington fielding perhaps the worst wide receiving corps in the league (we'll get to that in a minute), and an offensive line with some serious concerns.

The NFC East "clinched a bad quarterback in 2019" standings:

The realistic best case scenario that Washington fans have to hope for in 2019 is that Haskins' will to live isn't crushed, and that he makes positive strides toward becoming a good quarterback in 2020, when the team can maybe find a way to surround him with better players*?

MORE: 10 reasons the Cowboys will be a dumpster fire this season

2) Their best player doesn't want to play there anymore

Washington's best player is Trent Williams, the star LT who has been to seven consecutive Pro Bowls. And he's pissed because he apparently feels that the team took too long to diagnose a growth on his head. 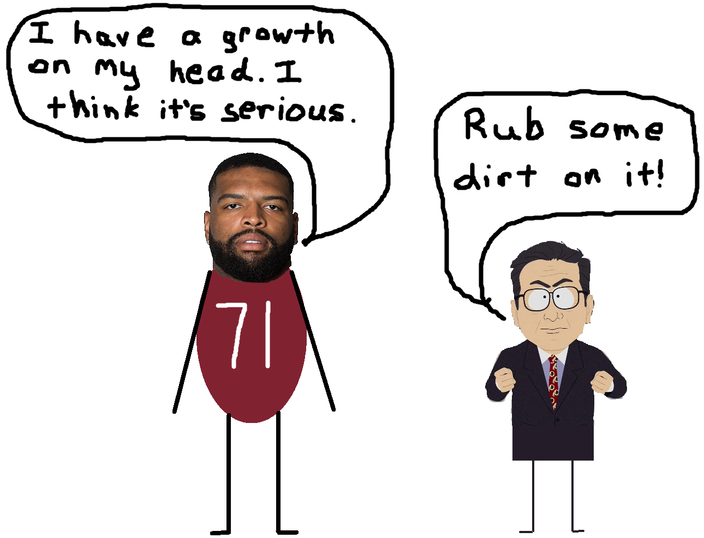 The growth was removed and Williams is reportedly fine after his scare. Still, he did not attend OTAs or mandatory minicamp, he reportedly wants to be traded, and it'll probably take a (deserved) significant bump in pay for him to show up to training camp.

In terms of average per year, Williams is the ninth-highest paid offensive lineman in the NFL. When healthy, he's a lot better than almost everyone ahead of him on that list. More importantly to Washington, they are absolutely screwed without him, as Ereck Flowers was reportedly getting first-team reps at LT in Williams' absence. It's bad enough that Flowers is even being projected to start at guard. Ask any Giants fan what happens to an offense with Flowers at tackle. Williams has extreme leverage.

Washington is likely going to have to give Williams a "Sorry we didn't diagnose that thing on your head" extension, which should be difficult for them, seeing as there are currently only eight teams with less salary cap space.

3) They have nothing at receiver

Washington's top three receivers are, um, Josh Doctson, Paul Richardson, and Trey Quinn? Yes? No? Well, whatever. Those guys have been in the league for a combined eight seasons, with 90 combined games played and 51 combined starts. To note, 77 (SEVENTY-SEVEN!!!) still-active players in the NFL in 2018 have/had more career receiving yards than the three of them combined.

Should I list all 77, and make everyone scroll down this long-ass list? Yeah, let's go ahead and do that:

Anyway, Doctson has been a bust three years into his career, Richardson can't stay healthy, and while Trey Quinn showed a hint of promise as a rookie last season, he's a clear downgrade in the slot from Jamison Crowder, who left in free agency this offseason.

That would be TE Jordan Reed. Let's recap his injury history, via SportsInjuryPredictor.com: 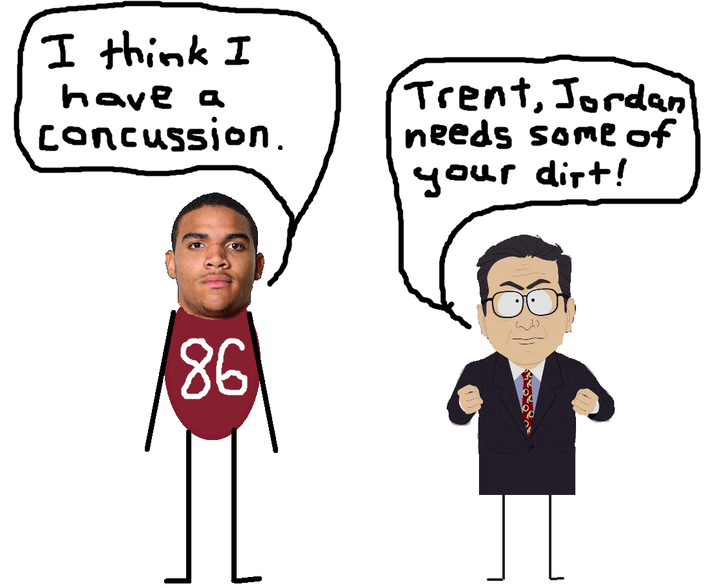 5) And yet, despite all the above offensive badness, it's the highest-paid offense in the NFL in 2019! Lol

Warren Sharp made the observation that Washington has the highest offensive payroll in the NFL in 2019.

Washington has the most expensive offense in the NFL this year. Amazing:

Wait, that can't be, can it? Oh, it be. According to OverTheCap.com, Washington has a hair under $109 million dedicated to their cap in 2019 on the offensive side of the ball, just ahead of the Colts, Buccaneers, and Packers. Why? Well, they have a boatload of awful contracts:

• Alex Smith: Bruce Allen traded for Smith, giving up a third-round pick and cornerback Kendall Fuller in the process, thus ending the Cousins era. Smith, by all accounts is a good guy and respected teammate, and while I wholeheartedly endorse the decision to let the Vikings wildly overpay for Cousins instead, Smith's four-year, $94 million extension wasn't the answer either on a team that was nowhere near Super Bowl contention. They were certainly a hell of a lot more than a middle-of-the-road quarterback away from being a serious contender, anyway.

Who knew a then-34-year-old mobile quarterback with below-average arm strength wouldn't age well? Of course, Smith suffered a horrific injury in 2018 that may very well end his career, but he wasn't exactly good last season before that occurred. Take this for what it's worth, but Smith was 27th in the NFL in QB rating and 26th in QBR last season. Yes, yes, the team went 6-4 in his starts, and congratulations to Smith for his wins over the Cardinals, Packers, Panthers, the not-yet-hot Cowboys, Giants, and Buccaneers, a group of teams with a combined record of 36-59-1, against whom Smith's offense averaged 22 points per game.

Anyway, whatever. Even without the benefit of hindsight, that was a dumb trade and subsequent contract extension, and Washington is now stuck with a $20,400,000 cap number for Smith in 2019.

• Paul Richardson: When Washington lost DeSean Jackson's ability to stretch opposing defenses, their offense took a hit, and their pursuit of a suitable replacement was understandable. However, they massively overpaid for the speedy Richardson during the 2018 offseason, when they handed him a five-year contract worth $40 million.

• Jordan Reed: Reed got paid after his one good season in 2015, and I certainly can't blame Washington for rewarding a player they thought would be a top-five type of tight end for years. But, uh, 2015 was a long time ago, and Washington could have saved $6,074,125 if they cut or traded him this offseason. Instead, he'll count on Washington's cap for $9,674,125, the third-highest number for a tight end in the NFL.

Why they haven't moved on is beyond me. Even when he has been able to play the last two seasons, he's averaging barely over 40 yards per game, and has 4 TDs in 19 games.

I mean, I guess it might be a little heartless for the team to cut a guy who has suffered six concussions, but that's small potatoes in comparison to their continued daily shaming of Native Americans.

As we noted last year, Allen was hired to be Washington's GM at the tail end of the 2009 season, and he has been the head personnel decision maker ever since, save for the short tenure of Scot McCloughan, who Allen helped oust after two season (2015-2016) with the team. In Allen's nine full seasons with the team, Washington's record is 59-84-1. After a 7-9 season in 2018, Washington's winning percentage under Allen improved to 0.413.

Beyond the bad record, Allen has a bad reputation among former colleagues, agents, and other personnel people around the league. He also didn't even know the name of his own starting quarterback.

There are a lot of general managers who shouldn't still be making high level decisions for their respective billion dollar businesses, and Allen is at the top of that list.

MORE: DeSean Jackson to Cowboys fanboy Skip Bayless: 'I'll shut yo a** up'

After his third arrest in a calendar year, the San Francisco 49ers waived linebacker Reuben Foster during the 2018 season. Fewer than three days after the third arrest, which was on domestic violence charges (his second of those in a year), the Washington team claimed him off of waivers. They were roundly (and rightly) criticized for it.

Foster did not play the rest of 2018, but he figured to be a big part of Washington's plans on defense in 2019, as he was slated to start at inside linebacker, replacing Zach Brown, who is now with the Eagles.

In May, he reportedly tore his ACL.

I mean, we mentioned above that Flowers was filling in for Trent Williams at LT while he was away. If he has to play there during the regular season... season over. Well, season over by Week 5, as opposed to, say, Week 8. But even if he's starting at LG, again, that's not going to be pretty either.

If you have a few minutes, type "Ereck Flowers" into the search bar on Twitter, click "videos," and be amazed at the volume of pass-blocking awfulness. My favorite video was this:

9) Who's starting at safety opposite Landon Collins?

It'll probably be Montae Nicholson, who was so bad last season that Washington traded a fourth-round pick for Ha Ha Clinton-Dix to replace him for the final nine games. They already know how that's going play out, but let's run it back!

10) And as always, let me check to see if Daniel Snyder is still the owner.

And guess what! This year is special, because May 25 marked the 20th anniversary of Snyder buying the team. I won't go through a timeline of Snyder's awful reign -- Washington City Paper did a fine job of that.

I'll just end this by noting that fans of the three other NFC East teams celebrate him:

Here's to another 20 years.