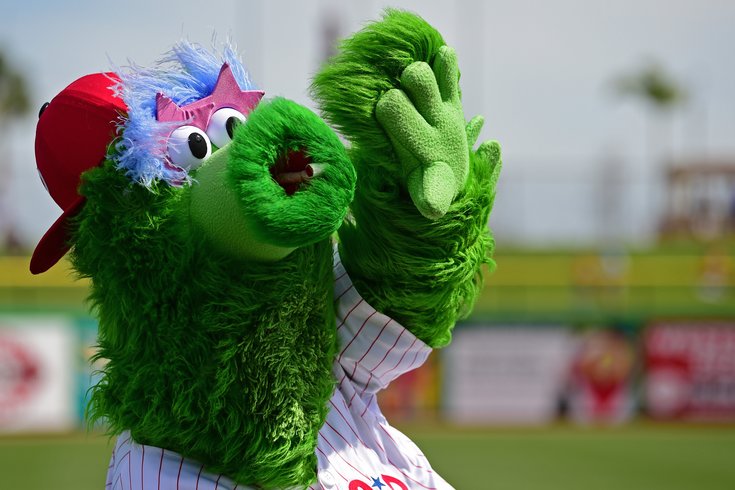 The new-look Phillie Phanatic waives to fans before a game between the Baltimore Orioles and the Phillies at Spectrum Field.

There will be baseball next month. It will just be super weird.

#MLBPA has informed #MLB players will report on July 1st for July 24 Opening Day. 60 Game season in 66 days. They are both still working on finalizing safety and health protocols which quite frankly will be something both parties will continue to improve on going forward.

As players and owners finally were willing to give up their battle over the 2020 season for the greater good, details have begun to emerge about how the season will be structured and played. There are some major changes to a sport that is very resistant to change.

We originally listed just five of them, but the more we looked into it, the more strange things we unearthed. Here are 10 changes to baseball that will certainly stand out in 2020:

If there had been a regular baseball season and no pandemic, there would have been 26 players on MLB rosters to start the year, continuing until rosters expand in September. Teams would have also been able to call up minor leaguers, as usual.

In 2020, with no minor league season, teams will have "player pools" which will include 60 players, and game day rosters of 30. That number will slowly decrease to 28, and then to 26. Half of the additional players in the player pool will be on a "taxi squad" reminiscent of the NFL's practice squad. The purpose of this is to give teams the ability to replace players due to injury (or positive tests).

So, we could really be scraping the bottom of the barrel here, especially if a team falls out of contention. Get ready to watch games between players you've never ever heard of.

The game will look weird. If you've spent any time watching baseball in Korea, you know what I'm talking about.

Whether American baseball will do anything interesting in empty ballparks meant to house 40,000-50,000 fans is anyone's guess, but every game will now resemble a Marlins or Rays game, as each team averaged 15,000 or fewer fans per game, leaving tons of seats empty every night.

No mascots on the field?

Maybe the Phillie Phanatic can help with that?

"Home Clubs may have their mascot in the ballpark if they choose, however under no circumstances are mascots permitted on the field of play or in any other Restricted Area on game days."

The Phillies will have a particularly brutal schedule — as they'll be facing teams in their division (arguably the best in baseball), and in the AL East (who boast a slew of actual contenders on their own).

Reports suggest the Phils will play each divisional team 10 times, and a mix of AL East teams 16 total times, plus four other games against another team for a total of 60 games. This is meant to reduce traveling. The Phillies only really need to get on an airplane to face four of their slated nine opponents. Here's the lion's share of games for the Phillies:

That's six of nine opponents who sported a winning record in 2019, or almost 70% of their schedule against good teams. And that's before factoring in how wild a 60-game season could be.

It's just weird to think about, but since there is a real season, there will be a real trade deadline. And real trades, and real moves by front offices to help their teams make the playoffs in the 60-game sprint ahead.

As part of plans agreed to at this point between MLB and the PA, there will be an 8/31 trade deadline. I do think being traded in a pandemic is particularly tough. Think about having to relocate yourself and maybe family under these circumstances.

Safety-wise, this has to be a hurdle. Players will unofficially be in a "bubble" with each other, and a trade will expose a traded player to an entire new circle of people. It will also, as Sherman mentions, move families or split families during a very dangerous time in the world.

It looks like Nick Pivetta's 8th inning walk on September 28th of last year — a 9-3 win over the Marlins — could be the last time a pitcher bats, ever, for the Philadelphia Phillies.

There will be a DH in the National League for the first time.

While the 2020 inclusion of the DH in both leagues is technically temporary, as it will be revised before the 2021 season, it certainly does feel like the end of an era. Both owners and players want universal designated hitters and it certainly benefits the Phillies, who will be trying to give as many at bats as possible to top prospect Alec Bohm as well as some talented bench players who will be able to have much more impact on the season now with a 9th batting slot.

Still, for baseball purists, it's weird.

A runner on second

So, this is a strange one. In order to lessen the amount of times players will spend in ballparks every night, MLB is starting the 10th inning with a runner on second. For the Phillies, this will no doubt give Roman Quinn time to shine. Having a runner on second will, in theory, speed up the game. It's worked in the minor leagues, increasing games that end in the 10th from 45% to 73%.

How this, as opposed to, say, having games simply end in ties, will really help players get home quicker seems to be anyone's guess, but it will no doubt make for more exciting finishes.

Unhappy with that third strike call? Think an umpire missed an obvious one or allowed something that wasn't above board? Well, managers and players need to keep it to themselves — or practice social distancing when they argue.

MLB not messing around with distancing. A player or manager coming within 6 feet of an umpire to argue a call is subject to suspension.

Yes, this is unfortunately still a thing. Prior to the pandemic's fury, baseball was set to implement a three-batter minimum for pitchers (unless ending an inning) in order to speed up games. The rule will make for some very interesting managerial decisions while, in my opinion, not really speeding up baseball all that much.

Expanded rosters will certainly help with this, but it is just another way the sport will look weird in 2020.

No one has hit over. 400 during a regular season since Ted Williams did it in 1941. Obviously, any record set during the condensed 2020 season would have an asterisk next to it, but still, a flukey .400 hitter could emerge this season. It's happened over 60 games before:

Five batting title-eligible hitters batted .400-plus through their teams’ first 60 games of a season during the Roto era (1980+):

Also, we could have some ridiculous stats for whoever wins the Cy Young award in 2020 as well...