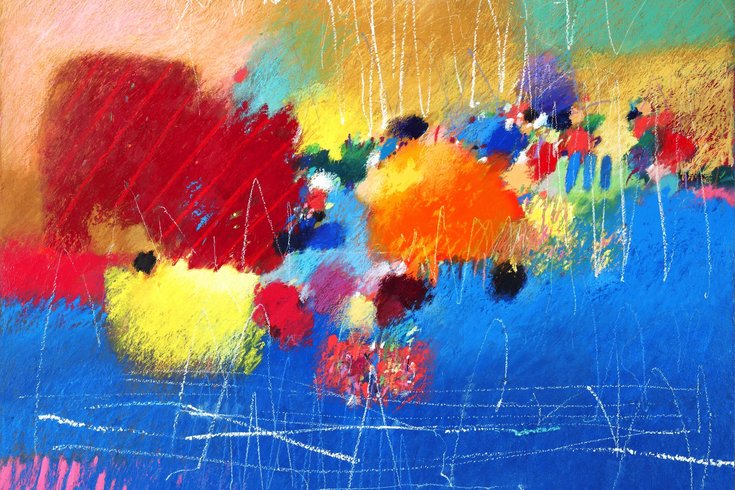 "Present Futures," 2006, will be featured in the upcoming exhibit, "Represent."

This month, the Philadelphia Museum of Art opens its latest exhibit, "Represent: 200 Years of African American Art." For this comprehensive exhibit, PMA has dug into its extensive holdings of African-American art to highlight the best paintings, sculptures, drawings, photos and decorative arts in its collection. Curating this expansive exhibit is Gwendolyn DuBois Shaw, associate professor of American Art at the University of Pennsylvania.

The inspiration behind the "Represent" exhibit was a catalog by the same name that the museum produced in conjunction with its African American Collections Committee. The committee teamed up with the museum's many departments and DuBois Shaw to create the catalog over the past few years. DuBois Shaw also contributed essays and edited the book. Though catalogs are often created to supplement a planned exhibit, this time, PMA flipped the script so the exhibit could celebrate their hard work.

John Vick, the exhibit's organizing curator, says the book is an interesting read for both the casual museum attendee and those with a professional art background.

"It's very accessible," Vick said. "[DuBois Shaw] covers a very broad history through the different chapters and she brings in themes that are relevant to the works in our collection, but are also broadly relevant."

It also includes contributions from about 20 different authors, both museum staffers and outside scholars, so the material is full of different voices. The book is available for purchase online and at the PMA for $42.

Over the last 30 years, the museum's collection of African-American artwork, which began with the 1899 acquisition of Henry Ossawa Tanner's "The Annunciation," has expanded. "Represent" includes pieces from eras preceding Tanner to the present, from pottery made in the 1800s to photos and prints from the 1990s and thereafter. Modernist artists like sculptress Elizabeth Catlett and painter William Henry Johnson can be found in PMA's selection, as can the abstract works of Barbara Chase-Riboud and Martin Puryear.

In addition to the breadth of styles and materials that the exhibit covers, the subject matter of the many works represents a variety of ideas. The included works span the beautiful yet utilitarian decorative arts to paintings, sculptures and pictures that meditate on representations of race and political identity. Such an exhibit wouldn't be complete without the quality programming the area has come to expect from one of our biggest cultural institutions.  View highlights from the exhibit programming below.

Art After 5: "Pictures at an African American Exhibition" and Late Night Dance Party

Saxophonist Darryl Yokley leads quintet Sound Reformation in "Pictures at an African American Exhibition." At 8:45 p.m., celebrity guest DJ Rob Base turns the night into a big dance party. "The idea is to do more of these events where we try to be a little more open to the public," Vick said of this late-night fun. "We try to go later so that people who want to go out late, they don't have to call it a night at 9 o'clock."

Join PMA's African-American Collections Committee in a gala celebrating trustee Dr. Constance E. Clayton. The night includes a private viewing of the "Represent" exhibit, a reception and seated dinner and an address from Duke University's Dr. Richard J. Powell. Proceeds support the advancement of diversity in the curatorial profession.

Spend this special holiday making greeting cards that will be distributed by MANNA, going on family tours and watching dance performances by PHILADANCO's apprentice group D/2.

Writer and poet Lyrispect leads some of the area's best musicians and writers in a special presentation. The performances will focus on the themes found in "Represent" and follow the journey of artists featured in the exhibit.

Consulting curator Gwendolyn DuBois Shaw hosts a conversation with three of the contemporary artists whose work is featured in "Represent." The artists, Vick said, will address questions like, "What does it mean to be put in an exhibition that is defined by skin color? Why is that useful and interesting and informative, but at the same time, why is that something that certain artists might think is not the best, most relevant way to be presented?"

Sunday, February 1
2 p.m. | Pay What You Wish, but tickets are required