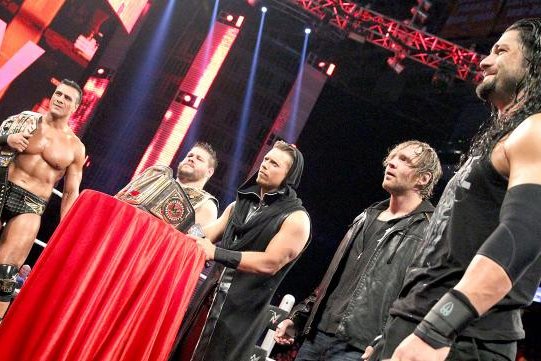 The Final Four have been decided. Who will walk away with that championship title Sunday night?

Atlanta, GA’s Philips Arena will host this year’s edition of the WWE Survivor Series, which will boast a WWE World Heavyweight Championship tournament for the first time since 1998. That year, The Rock truly took the next step to superstardom by joining Vince McMahon and forming The Corporation, effectively becoming the hottest heel in professional wrestling.

Could his cousin, Roman Reigns, follow in his footsteps? We’ll delve into what the Final Four of the tournament have in store, along with the now highly anticipated Divas Championship match between Paige and Charlotte. Of course, it’s 25 years of The Undertaker as he teams with his “brother” Kane to take on the Wyatt Family.

Here’s how I see the Survivor Series on Sunday night playing out:

These two have crossed each other’s paths quite frequently lately. Despite a loss to Dean Ambrose in the WWE World Heavyweight Championship tournament, Breeze has looked good since being called up to the main roster, but Ziggler needs a win badly. Since Ziggler was sabotaged by Lana and Rusev’s real-life engagement to end that [terrible] storyline, he’s toiled away and just not been an important part of television in too long.

I could see Ziggler losing here and begin to show a new attitude with a slow-burning heel turn to kind of rejuvenate his character. That might be the best bet for him at this point.

This match has a ton of heat heading into Sunday because of one line. On Monday Night Raw, Paige invoked Charlotte’s dead brother, Reid Flair, in a wrestling storyline. At first, I thought it was a great angle to build heat between two women who really needed a kick in the ass in terms of having people care about their feud. It was really lacking some passion. Now, it had it.

Seeing it play out on television didn’t make me think twice that all parties involved, and that includes Ric Flair and Reid’s mother, Elizabeth, were all in the know and knew what was coming. That was not the case. Flair stated on his podcast that he wasn’t notified about the angle, and started breaking down while watching it on television. There were reports that Charlotte herself suggested that it be included in the script, and then it was removed from the script, and then put back in at Charlotte’s desire.

We’ll probably never know what truly happened in regards to the angle, but the bottom line is it created heat for a wrestling match. A lot of people have been spewing vitriol towards WWE for letting that angle play out on television. I totally get it, and I think it was in terribly poor taste to for nobody to notify Reid’s parents that would be used in a wrestling angle. We’ve seen stuff like this play out on wrestling shows in the past, but the more we evolve as a society, the more we realize that even in professional wrestling there are just better ways to build feuds. A perfect example would have been Paige having someone attack Ric behind the scenes. Boom, heat.

There’s no way after an angle like that Paige walks away with the Divas Championship on Sunday night. This’ll be Charlotte’s second big signature win since winning the title.

The Undertaker and Kane vs. The Wyatt Family

I would’ve loved for this match to be a traditional Survivor Series elimination match, but the more I think about it, who would logically partner with The Undertaker and Kane? Bray Wyatt has focused his attention on those two individuals alone, so introducing new stars to the fray wouldn’t make much sense.

This match, however, will be a traditional tag team match. There are a ton of rumors floating around as to what the ending will hold. Will this be the beginning of Undertaker’s road to WrestleMania, and possibly his last? If so, what big angle happens during this match?

Regardless of what happens, I had high hopes with this feud after Hell in a Cell, but I’ve been very underwhelmed with how this has progressed over the weeks. If the Brothers of Destruction already destroyed four members of the Wyatt Family, what makes a fan think only two members of said family will stand a chance against them? That’s the type of storytelling that doesn’t really make sense, and it doesn’t help the group at all heading into Sunday. On SmackDown, both Wyatt and Strowman conducted promos, which would lead me to believe they will be the two representing the Family at Survivor Series.

Now, if they can convert Kane to a member of the Family, then I’d be interested. But, I don’t see The Undertaker’s Survivor Series ending in defeat.

Your winners: The Undertaker and Kane

Rumors were flying around before Seth Rollins’ injury that these two would meet at this pay-per-view anyway, so this match isn’t totally surprising. In fact, this match will probably be the catalyst for an ensuing feud between the two.

With Owens already holding the Intercontinental Championship, I don’t think he needs to be in the finals. Would it be great and make the Intercontinental Title look even more important? Sure it would. But I think this tournament will be for the greater good, and that’s a title reign for either Ambrose or the winner of the next match.

This could be the start of a nice feud between the two, though I’m not so sure we’ll be seeing that after Survivor Series is over. I think this is as close to an automatic win for Reigns as you can get, simply because nobody’s going to buy Del Rio in the Finals.

Will Reigns regret not shaking Triple H’s hand on Monday night? I’m not so sure.

Poetic justice, am I right? Former members of The Shield will have held the WWE World Heavyweight Championship since March, because I fully predict this match will be the final. Will there be someone who stabs the other in the back, figuratively? Absolutely.

With WWE’s best heel out until next summer, they definitely need some new blood atop the card on that side of the fence. Owens is perfect for that role, but the company needs more than just one white-hot heel at the top of the card, and one of these guys is it.

So, will it be Reigns or Ambrose? Whoever wins this match will become the new poster boy for The Authority. With John Cena currently out for the time being, does Reigns or Ambrose sit atop that side of the fence?

The easiest way to build this, in my opinion, is to keep Ambrose as the top face in the company, since he gets loud cheers and is practically never booed, and turn Reigns, who could become one of the best heels in the company in a long time. He has the look of a heel, and could follow in the footsteps of The Rock to become the next best heel character.

I think that’s the best outcome for this event.

With the championship tournament, I think this Survivor Series will be one of the best in recent memory. The WWE has re-written storylines and plans after Seth Rollins’ injury, and they’ve done a really good job since in regards to the tournament. The Wyatts/Brothers of Destruction angle? Nah. I’m really looking forward to the Divas match, and I think the Ziggler/Breeze match will be an underrated match of the night.

I’ll have your complete Survivor Series review right here at The Philly Voice on Monday morning. Enjoy the show!