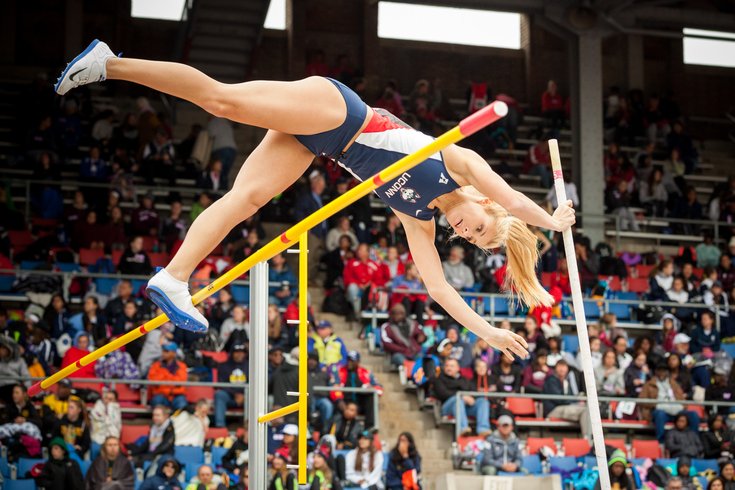 University of Connecticut's Nicole Kelly competes in the college women's pole vault, Thursday, April 28, 2016 at the Penn Relays at the University of Pennsylvania.

Thursday marks the start of the 122nd annual Penn Relays –— the oldest, largest and most celebrated track and field competition in the United States. Men and women from the high school, college and professional track ranks will participate in 35 hours of competition from April 28-30, representing more than 60 countries from around the world in more than 425 races.

Over the course of the three-day event, an estimated 22,000 runners will compete at Franklin Field, which is expected to draw more than 100,000 people to the West Philadelphia campus of the University of Pennsylvania.

Here's a guide to essential information you'll need for the 2016 Penn Relays.

The National Weather Service forecasts mild to chilly temperatures throughout the event, with light winds and a chance of showers during the first two days of competition. All events will be held rain or shine.

Saturday: Partly sunny, with a high near 62. Northeast wind around 6 mph becoming easterly in the afternoon.

General Admission and Reserved Seating options are available for both single-day attendance and three-day packages. Tickets can be purchased online here, by phone at 215-898-6151, or at one of five campus ticketing booths in the vicinity of Franklin Field. A map of these booths, along with the event locations for various competitions, can be referenced below. 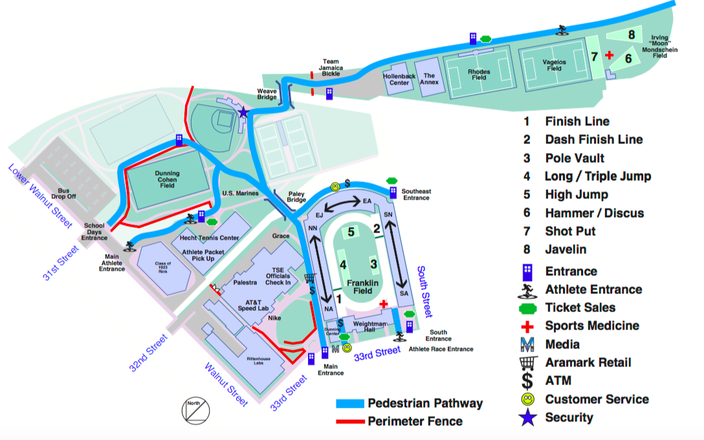 Single-day ticket prices range from $18 (GA) to $24 (reserved) while three-day packages will cost anywhere from $66-108 (not including fees) depending on seat locations for each day of events.

A VIP pass can purchased with a $1,000 donation to the Friends of the Penn Relays, which offers plus-one access to the Finish Line Club and the Hospitality Suite overlooking Franklin Field. VIP ticket holders will receive an alternative menu and beverage options, free parking outside the stadium, photo opportunities, and post-race press conference access.

CAN I WATCH THE PENN RELAYS ONLINE OR ON TV?

Visitors driving to the event from across the region can review applicable directions provided by the University of Pennsylvania. A map of nearby parking garages can be viewed here. Metered street parking is available, however, there is usually a 2-3 hour limit at about $1.50 per hour. Some garages will charge a flat fee with varying prices. The following garages are recommended on a first-come first-serve basis:

Those taking public transportation from around the region are advised to use SEPTA's Market-Frankford subway line and get off at either 34th and Market streets or 30th Street Station, which is about a 15-minute walk from campus. SEPTA's Green Line trollies can also be taken to either 36th and Sansom Streets or 37th and Spruce Streets.

For those who park off campus, shuttle service will be provided for a fee to get to and from Franklin Field during the course of the Penn Relays. More information on shuttles can be found at Campus Park & Ride  Information on hotel accommodations can be found here.

Events at the Penn Relays aren't just limited to young athletes, either. As The New York Times covered in depth, 100-year-old Ida Keeling will participate in the Masters Mixed 100 meter dash on Saturday at 3:45 p.m. She'll take on several members of the Philadelphia Masters, including 99-year-old Champ Goldie and 95-year-old George Scott.

A complete schedule of events for the 2016 Penn Relays can be found here.