2016 WWE Royal Rumble preview: Who will walk out with the WWE Heavyweight Championship? 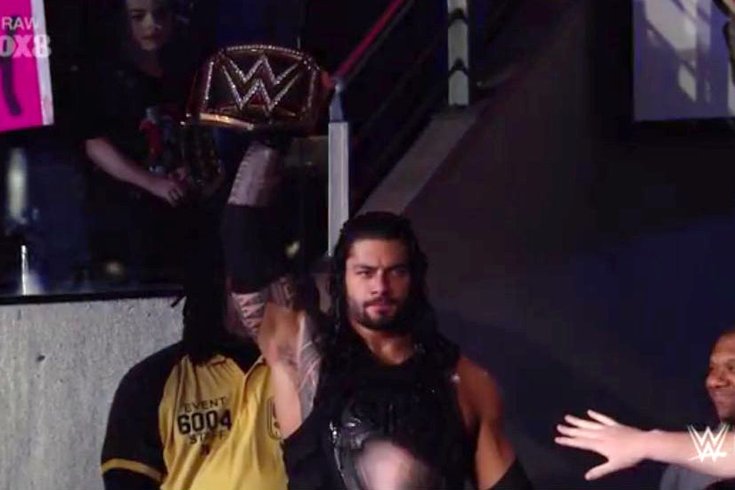 Will Roman Reigns be able to go through 29 other superstars and retain his championship Sunday night?

The 29th edition of the WWE Royal Rumble will take place this Sunday in the Amway Center in Orlando, FL. What will be the fifth Royal Rumble event in the state of Florida will also be the second ever Rumble match to feature the WWE World Heavyweight Championship on the line.

1992’s Rumble had the vacated title on the line, and Ric Flair defeated literally 28 other men [British Bulldog eliminated Ted DiBiase before Flair entered the match] to win the title. Someone will be walking out of the Amway Center with the gold, and the odds it will be the current champion, Roman Reigns, are pretty slim.

Many expect there to be some sort of surprise ending, due to ongoing rumors that WWE is building up the February Fastlane pay-per-view to be a major event heading into WrestleMania 32. I absolutely can see Reigns losing his championship and re-gaining it at the biggest event of the year. But that leaves the question – who would walk out of Orlando with the championship? This Rumble match has a lot of different questions heading into it and a lot of unique outcomes that we could see.

Do I think Reigns will lose the championship? Is Kevin Owens ready to gain back what he lost to Dean Ambrose last month? Can Becky Lynch dethrone Charlotte at the top of the Divas division? Here’s what I expect to go down at the Royal Rumble this Sunday:

Darren Young and Damien Sandow vs. The Dudley Boyz vs. The Ascension vs. Mark Henry and Jack Swagger

The winning team of this preshow kickoff match will be granted a chance to fight for the WWE World Heavyweight Championship in the main event, so there’s a lot on the line in this preshow match. However, I doubt people will be clamoring to see Young, Sandow, the Dudleys, the Ascension, Henry or Swagger in the Rumble match. So this match will basically mean nothing because there’s no chance any of these eight men walk out of Orlando with the World Title. Let’s go with the Dudleys.

Your winners: The Dudley Boyz

This has been one of the better feuds as of late, and these two superstars always bring the goods when they’re in action, having backstage interviews, or on commentary during matches. With this being a Last Man Standing match, there’s a chance we see a lot of great spots from these two, with a possible draw at the end.

The entire point of the Last Man Standing stipulation is for both competitors to incapacitate their opponent enough so they cannot answer a 10 count. If both superstars fail to answer the 10 count, the match is decided as a draw, with the champion retaining the championship. I absolutely can see something like this occurring to keep this feud going into February’s Fastlane pay-per-view.

I also can see the title changing hands again and Owens becoming a two-time Intercontinental Champion. I certainly wouldn’t be opposed to that, but then it would render the title change at TLC pointless. Ambrose hasn’t really done much with the title, and that’s all on the creative team. There’s nothing wrong with having title matches on television every week. It’s like the creative writers are allergic to stuff like that. I think the champion ultimately retains here.

These two have been having a series of great matches the last couple of weeks, and I expect that trend to continue on Sunday night. While I don’t necessarily understand why Kalisto would win the United States Championship on Raw last Monday just to lose it literally the next night at the SmackDown taping, the right guy holds the title right now.

The Kalisto win was a nice surprise, but once it became clear that they don’t plan on really putting a title on Kalisto and having him run with it at the moment, it was a matter of time before Del Rio regained the title. I actually thought he would win the title back at the Rumble, but a rematch on SmackDown would be the time and place for Del Rio to regain the strap.

If Kalisto wins here, he should keep the title for a run. The title hasn’t meant anything since Del Rio defeated John Cena for it back in October at Hell in a Cell, and it still won’t mean anything if they just continue to swap it back and forth between Del Rio and Kalisto. A trend of great matches with the champion retaining until a suitable new champion is picked is enough to elevate the importance of the title.

Kalisto is not that guy. At least not yet. He’s just getting the opportunity because his partner from the Lucha Dragons, Sin Cara, is nursing a shoulder injury. He’s a tag team player right now, not a singles champion. The champion should retain here.

Here’s a match that just seems thrown together for the sake of having a match. The New Day and The Usos haven’t feuded in months, but here we are, the first pay-per-view of 2016, and we have a WWE World Tag Team Championship match between the two teams.

The Usos grabbed a win on the January 11th edition of Raw against the champions in a non-title match, so I expect The New Day to retain here. The match will surely be a good one, as these two teams know how to work together and put on an entertaining match. I just have a hard time caring about it because it feels like one of those last minute matches thrown together.

While Ric Flair accepted this match on behalf of his daughter, it might actually signal a different direction for Charlotte’s character and not exactly a split that causes friction between the two. I’m not expecting Charlotte to turn face again (Please no!) but I think it’ll be a sort of “rounding out the character” type of moment for Charlotte when she realizes she doesn’t need her father anymore. What better heel tactic than to dump her father, the Dirtiest Player in the Game?

Becky has come a long way this past month and definitely deserves a run with the championship, but I don’t think Charlotte should lose the title any time soon. If they can drag this feud – which has been a very good one, as well – to WrestleMania, Becky should get her win there. I’m not expecting a title change here, but I am expecting a great match. We’re in store for one.

This is setting up to be one of the biggest Royal Rumble matches in history. It’ll be the second-ever Rumble match to feature the winner becoming the champion of the company; that in and of itself is huge. Instead of the title being vacant like it was in 1992, Roman Reigns will defend his title, which is unprecedented. Look for a lot of surprises to happen Sunday night.

Here’s a list of the 18 current wrestlers that have been confirmed for the match: [updated as of 1/21/16]

Reigns is currently slated to enter the match as the first participant, so he’ll literally have to go through 29 other superstars to come out victorious.

There’s a handful of wrestlers I could legitimately see winning. We hopefully will be seeing some surprise entrants in the form of A.J. Styles and maybe some NXT stars, but those guys clearly won’t be favorites to win the Rumble match. Rumors are swirling that Triple H could also be in the mix as a surprise Rumble entrant, but I don’t exactly see him winning the match. He’s the favorite in Vegas at the moment, and would make complete sense to enter the Rumble after Reigns demolished him at the TLC pay-per-view in December.

I don’t like the idea of Triple H becoming the champion, but it might be a necessary evil for the good of the storyline.

Reigns is entering the Rumble as the first entrant, so that gives WWE a creative way for him to be eliminated in a fashion we haven’t seen since 1995. Four times in WWE history has the first or second entrant won the Rumble match, but other than the 1995 Royal Rumble, the first or second entrant has never been in the final two superstars remaining in the match. This is the perfect opportunity to gain sympathy for Reigns, take the title off of him, and build him for that all-important WrestleMania win.

Now, some might disagree with taking the title off Reigns just for him to win it back at WrestleMania. He came full circle during the calendar year of 2015, and he’s been on a roll recently. But having him keep the title through the Rumble means he wins the match as the No. 1 entrant, and we’ve already seen that. It’s kind of old, and has lost the specialness of it.

So what’s the best way to build sympathy for Reigns and have him really embark on a journey for the championship that culminates at WrestleMania? Triple H. It all boils down to Triple H, unfortunately. I’m not exactly a fan of this finish because of what it would entail, but it would make for one of the best Rumble finishes ever if they went this way.

I would have Triple H come out as the last entrant and have the final two combatants be him and Reigns. Triple H would eventually eliminate Reigns – maybe with some help from the League of Nations or others – and become the champion. Not only does he take what Reigns holds most dear to him, he eliminates him and kiboshes the great story of the match with Reigns having to overcome the odds, but having it end in heartbreak. I think that’s the best way to book the ending of the Rumble, unless they want to keep the title on Reigns and have him as strong as ever heading into WrestleMania. I can see that also being the case, but then where’s the incentive for a title chase? There is none.

So, my official prediction to win the Rumble is Triple H. It makes storyline sense and could possibly make the 2016 Rumble match one of the best Rumble matches in history in terms of the storyline.

But I can dream. And I think the storyline’s positives outweigh the negatives.

Check back to PhillyVoice.com on Monday morning for your in-depth Royal Rumble review.