You know 'Hamilton' is coming to Philly, but what about these other shows? 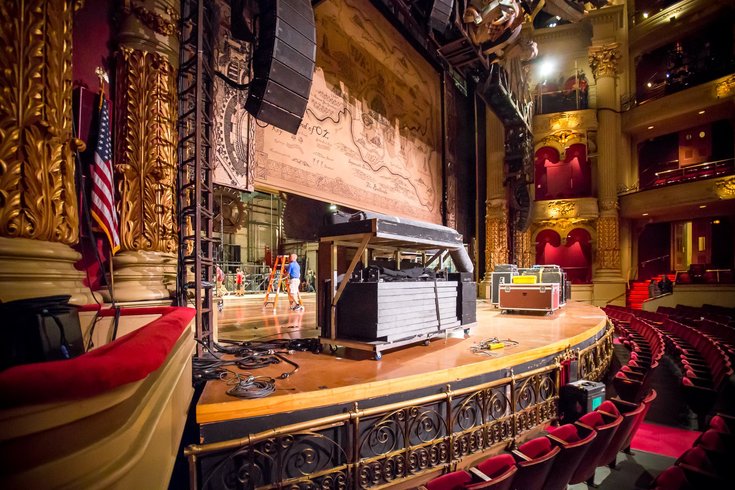 A photo of the Academy of Music's stage being set up for a performance of "Wicked" in 2017. The upcoming season won't include the popular musical about the witches of the Land of Oz, but there are some other returning favorites.

The lineup for the Kimmel Center's 2018-2019 Broadway Philadelphia season includes 13 shows. Some – like "Hamilton" – will be making their Philadelphia premieres, while others are returning favorites.

In addition to Lin-Manuel Miranda's hit, the shows new to Philly are "Love Never Dies," "Roald Dahl’s Charlie and The Chocolate Factory," "Dr. Seuss’ How the Grinch Stole Christmas! The Musical" "The Lightning Thief: The Percy Jackson Musical" and "Anastasia."

RELATED: This "Hamilton" star is returning to Philly for a special performance | Tony Award-winning musical "Once" to be performed at the Arden Theatre | Check out the lineup for O18, an 11-day opera festival

During the upcoming season, Philadelphians will also have a chance to see "Fiddler on the Roof," "Cats," "Beautiful – The Carole King Musical" "Rodgers + Hammerstein’s Cinderella," "Rent" and "The Book of Mormon" on stage again.

Below is more information on each production. Combined, these 13 shows have more than 40 Tony Awards. For some productions, tickets are already on sale, while tickets for others will become available Friday, Sept. 14.

"Love Never Dies" is Andrew Lloyd Webber’s sequel to "The Phantom of the Opera." It is 10 years after his disappearance from the Paris Opera House and The Phantom has escaped to a new life on Coney Island in New York.

This new production brings fresh vision to the beloved theatrical masterpiece, which centers on a father and his five daughters.

Audiences will want to sing along to the hits "Tradition," "Sunrise, Sunset," "If I Were A Rich Man," "Matchmaker, Matchmaker," and "To Life (L’Chaim!)."

Willy Wonka is opening his mysterious chocolate factory to a lucky few with golden tickets.

Songs from the original film, including "Pure Imagination," "The Candy Man" and "I've Got a Golden Ticket," will be performed, alongside a new score from the songwriters of "Hairspray."

This heartwarming holiday classic will come to life on stage.

Max the Dog narrates as the mean and scheming Grinch, whose heart is "two sizes too small," steals Christmas away from the holiday-loving Whos.

Expect to hear songs like "I Feel The Earth Move," "One Fine Day," "You’ve Got A Friend" and more timeless tunes.

This adaptation of the best-selling novel includes Greek gods and monsters.

As a son of Poseidon, Percy has newly discovered powers he can't control.

This production of "Cinderella" includes the pumpkin, the glass slipper, the masked ball and some surprising new twists.

"Rent" follows an unforgettable year in the lives of seven artists struggling to follow their dreams.

In the last days of the Vietnam War, 17-year-old Kim meets and falls in love with an American G.I. named Chris, but they are torn apart by the fall of Saigon.

For three years, Kim goes on an epic journey to find her way back to Chris, who has no idea he has fathered a son.

This show, inspired by the films, transports audiences to Russia and Paris, as a brave, young woman sets out to discover her mysterious past.

This outrageous musical-comedy follows the misadventures of a pair of missionaries, sent halfway across the world to spread the Good Word.

During one magical night, a tribe of cats gathers for its annual ball to celebrate and decide which cat will be reborn.

Subscribing to a seven-show package is currently the only way to guarantee seats to "Hamilton."