2018 NHL Draft: What they're saying about the Flyers' first-round picks 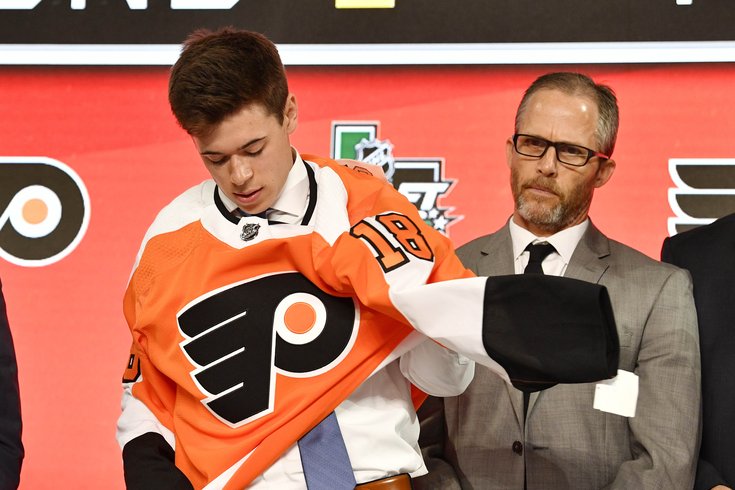 The Flyers made a pair of draft picks during Friday night's first round, opting not to make any deals despite a few mid-round shakeups. In the end, general manager Ron Hextall came away with a pair of undersized forwards with tons of potential — winger Joel Farabee and center Jay O'Brien.

"When we’re looking in the first round, we want hockey players," Hextall said Friday night when asked what the Flyers saw in Farabee and O'Brien. "We want guys with hockey sense. We also want character. We want good hockey players. If you don’t draft them in the first round it’s hard to find them so, philosophically, that’s the way we approach things."

But that hasn't stopped some from questioning those picks, specifically O'Brien, a Massachusetts prep school player who went many slots ahead of where he was projected to go. Hextall, however, had a good answer to combat that criticism, citing the fact that this year's draft was light on top-tier talent but very deep after that — which also makes it a nice year to have a pair of first-round picks.

And when it comes to O'Brien, the potential upside far outweighs the risk, according to the Flyers GM.

"He just has all the traits of a hockey player. Again, his hockey sense, his timing of passes, when to shoot, when to pass. He just has a hockey sense," Hextall said. "If you want to say there’s a concern that he hasn’t played at a high level — people call that a risky pick because he hasn’t played at a high level and quite honestly, it’s a tough evaluation, there’s no doubt about it. I feel confident. Our scouts do a great job and we felt really strong about him."

Were there safer picks available? Sure. But despite the added risks of taking an undersized prep player in the first round, Hextall thinks history will prove that O'Brien was the best option for the Flyers.

"I’ve never been one to be safe — I don’t think it’s a good philosophy," Hextall said. "I don’t think you can be successful that way, so if we believe in something, we do it. We believed in picking Jay O’Brien higher than most people thought he should go, and we feel good about it."

As for their other first-rounder?

"He’s a real attention-to-detail player; he competes hard; he’s got speed, he’s got skill; he can score," Hextall said of Farabee, the 5-11, 162-pound winger. "He’s a good player. He’s also got size in his family, so I still think there’s a chance he can grow but he’s certainly going to put a lot of beef on."

Luckily, Farabee is headed off to college next year, so that's 15 pounds right there.

Now, here's a look at what some others are saying about the Flyers' first-round draft haul...

Flyers GM Ron Hextall was playing with house money when you consider both his elite prospect pool and this being the first of two picks in the top 30. Farabee is a skilled 200-foot winger with great vision and is deadly in open ice. Grade: A

The second of Philly's two first-round picks is a roadrunner who loves to shoot the puck. O'Brien is a tough competitor who hates to lose, and he can stickhandle around just about anything. He was the top high school player in the U.S. and is bound for Providence College. Grade: A  [sportingnews.com]

Joel Farabee, LW: Farabee is a 200-foot player that brings skill, smarts and instincts to the wing. He's a good skater with nice finishing ability. He'll need to get stronger, but he's got potential to be a very good all-around player.

Jay O'Brien, C: O'Brien was considered a bubble first-rounder but he goes inside the top 20 to the Flyers, who clearly saw something they liked. The American playmaker has a pretty offensive skill set down the middle, and he'll hope to develop further at Providence College.  [cbssports.com]

14. Philadelphia Flyers: Left wing Joel Farabee, U.S. NTDP. His coach, Seth Appert, has compared Farabee to Pittsburgh Penguins forward Jake Guentzel. He was one of the top offensive stars (40 points in 25 USHL games) on one of best teams in U.S. NTDP history.  Farabee is a smart, creative offensive player with a notable shot and superb instincts. Heading to Boston University.

19. Philadelphia Flyers: Center Jay O’Brien, Thayer Academy. Thayer Academy is the school that produced Jeremy Roenick and Tony Amonte. O’Brien is a difficult read because he didn’t play against other top prospects. But he was a dominant prep school performer with skating ability, a quick shot release and overflowing offensive instincts. He produced 43 goals in 30 games this season. Heading to Providence College.  [usatoday.com]

Well that was a quick pick. Didn’t even thank the city of Dallas. Farabee benefited from playing on the same team as Jack Hughes and Oliver Wahlstrom. He’ll have to play without them when he plays at Boston University next season.

Well, we have our first high school pick. The Flyers add another center to their already impressive depth chart, but O’Brien looks to be a project.  [fansided.com]

INSTANT ANALYSIS: Extremely smart player. Not the most impressive as far as skill, but he’s a 200 foot player. Did very good with Wahlstrom and Jack Hughes this year.

And, finally, if you're interested in what the folks over at ESPN have to say, it's going to cost you...