2018 NHL Draft: When it starts, how to watch it, and when the Flyers will pick 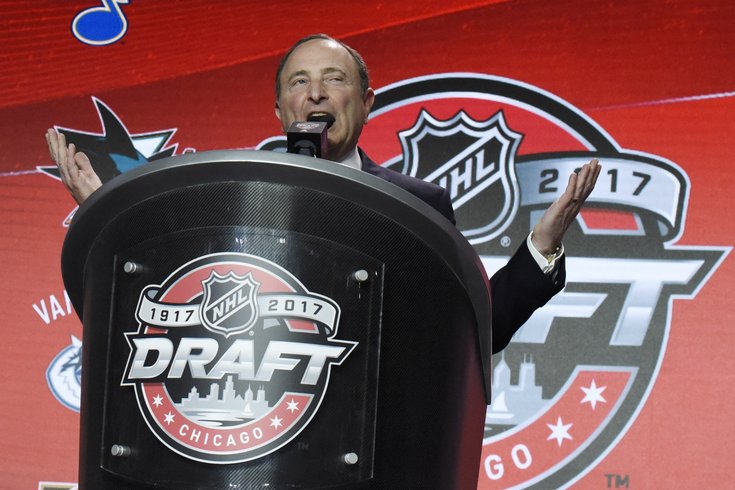 NHL commissioner Gary Bettman addresses the crowd before the start of the first round of the 2017 NHL Draft.

Last year, there was a lot more buzz surrounding the Flyers heading into the NHL Draft, largely due to the fact that they hit the draft lottery earlier in the spring and saw themselves jump all the way to the second pick, well ahead of where they were otherwise slotted to pick.

This time around, Ron Hextall and Co. will have to do a bit more waiting, but they also have the advantage of owning a pair of first-round picks – 14th and 19th overall – which gives them plenty of options heading into draft night.

Could the Flyers package those picks to move up and get a potential star? Could they use one (or both) to trade back and possible add to the nine draft picks they already posses? Could Hextall trade away a veteran in one of these totally hypothetical situations?

The answer to each of those questions is yes, and that's part of what's going to make Friday night's first round so intriguing for Flyers fans. It also makes it nearly impossible to project what's actually going to happen. That being said, here's what Flyers fans need to know to get ready for the 2018 NHL Draft:

HOW TO WATCH THE NHL DRAFT

WHEN DO THE FLYERS PICK?

Here's a look at when the Flyers will make each of their nine picks in the 2018 NHL Draft:

Here's a look at who will be making each of the first 31 picks on Thursday night.

*Under the terms of their trade with Colorado, the Senators "have the option to retain their pick and instead send the Avalanche their first-round pick in the 2019 NHL Draft." [via NHL.com]

SOME FIRST-ROUND OPTIONS FOR THE FLYERS

Here's a look at a couple of prospects who should be in the mix for the Flyers in the first round of the 2018 NHL Draft (and what people who know a lot more about hockey than I do had to say about them). We'll be back on Friday morning with some more potential first-round picks for the Flyers.

So what do we have in Kupari? We have perhaps one of the five best players in this draft in overall offensive skill. He has quick hands and can change the angle in the blink of an eye making a goaltender’s job extremely difficult. He has a rocket of a shot and isn’t afraid to fire from anywhere. When he has the puck on his stick, he’s very aggressive in attacking the middle.

As good as Kupari’s offense is, his defense is well, being worked on. He needs to get stronger especially if he wants to play center in the NHL. He also must develop consistency from game to game. Too often watching games you could see he’d let the foot off the gas. He’s too talented to go invisible as often as he did. He is at least 2-3 seasons away from the NHL. But goodness, teams who invest in this young man might get a huge payoff later with proper development. [thehockeywriters.com]

Farabee is an cerebral three-zone playmaker who consistently adheres to textbook fundamentals in addition to being one of the most lethal scorers in his draft class. He can tailor his style to fit any game — wide open, slogging matches, physical…it simply does not matter. Farabee is a top-line winger for the NTDP and he plays that role in every situation no matter the score or time on the clock. He’s very quick in open ice and possesses a devastating change of pace that catches defenders flat footed, and he’ll use a rapier-like inside shift inside if taking the puck wide isn’t the preferred route. One thing you notice instantly is his work ethic on the ice — Farabee has a nonstop motor and will bust it from start to finish on every shift. He’s a wiry kid, but his balance is stromng and he can endure a physical beating, plus ward off thicker defenders as he bulls his way to the cage. Even at 17-years-old, Farabee already own a pro-quality shot for its accuracy, velocity and release. Compounding matters for opposing goalies is that he’s as proficient with his backhand as he is on the forehand. Easily one of the top forwards among his draft-eligible peers and a kid with star potential.  [thedraftanalyst.com]

There’s a lot to like about Isac Lundestrom’s game. His skating isn’t on an elite level but it’s definitely one of his best attributes. He’s able to push defenders back and enter the offensive zone with his skating alone at times. He’s shifty and can weave his way between defenders with his top end speed. His edge work is also impressive and it will be interesting to see if he can improve upon that even more. [broadstreethockey.com]

Bode Wilde is a talented and competitive defender that plays a tenacious 200-foot game. His balance and acceleration in-stride is noteworthy and he is never caught in no-man’s land, or doing nothing. He is proactive and hard-nosed in pursuit if puck control, and he reads queues in all three zones naturally and quickly. Defensively, he is a beast and always looks to take time and space away from the opposition. He erases the open lane, keeps opponents to the outside, and is physical along the wall. In-transition, he is able to make that outlet pass or, more than likely, take it up himself to set up the trap. Offensively, he showcases a very hard, accurate shot that leaps off his stick. He can also open up space by way of his skating ability, size, and handling of the puck. Thanks to his quick thinking in making the high-percentage decision, he can be very difficult to read and play against. All-in-all, Wilde is a smart, competitive, and sizey two-way D-man that can provide a team with numbers on the board and stability on the ice.  [eliteprospects.com]