Five potential Eagles targets who impressed at the Senior Bowl 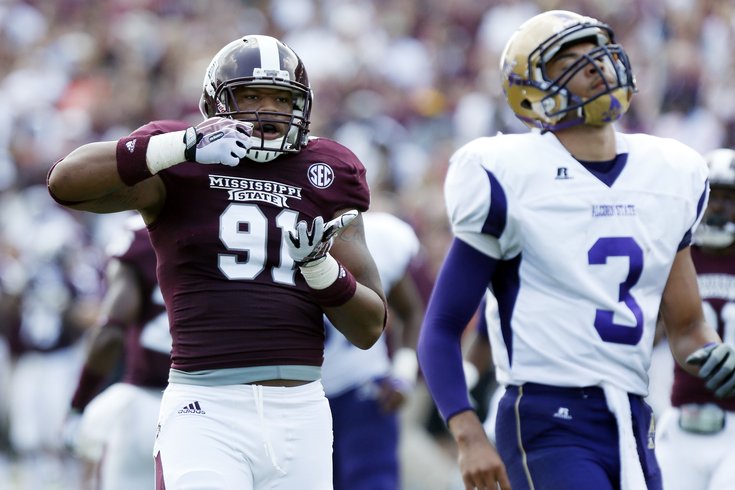 Mississippi State's Preston Smith does that annoying thing where he pretends like he's eating after he makes a good play. But I like him anyway.l

With the Senior Bowl week of practices as well as the game itself in the books, let's take a look at some players who performed well who could be of interest to the Eagles in the 2015 draft:

Rollins is a playmaker. During the week of practices, he showed a knack for locating the ball in the air and making plays on it, something Philly fans rarely saw from Eagles starting corners in 2014. In the Senior Bowl game itself, he made a very nice over the shoulder interception. Rollins was a star basketball player at Miami (OH) for four years, and didn't play footbal until his senior year, when he had seven interceptions. He has an enormous ceiling. To be determined if 5'11 is too short for the Eagles' liking. Projected round: 1st or 2nd.

Abdullah has very impressive quickness and acceleration, which makes him a nightmare to tackle in space. He is also a skilled receiver out of the backfield. Abdullah was the most talented of the backs at the Senior Bowl, and is also regarded as a high character guy. In the game, Abdullah had 73 rushing yards and 40 receiving yards on 11 touches. Projected round: 2nd.

The Eagles have a history of drafting big school players since Chip Kelly became the head coach: 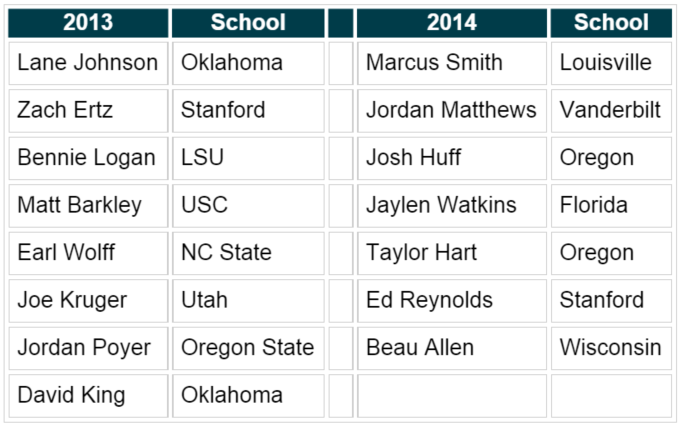 Coming from a small school, Marpet was not intimidated going against big school players in the slightest. He attributed that to his coaching at Hobart.

"Our O line coach is awesome," said Marpet. "He's a Division I caliber coach. I think people have a [perception] that a Division III player wouldn't have the technique that these other guys would, but our coaches got me right.

"Compared to the other players, I think my technique is on point."

Marpet played guard and tackle in college, but likely projects as a guy who can play all three interior OL spots in the pros. With Evan Mathis and Todd Herremans both well into their 30's, the Eagles need to reload with youth along the interior of their OL. Marpet seems like a logical player of interest if the Eagles can look past his small school background. Projected round: 4th or 5th.

We've covered Drummund at length here over the last week, but in case you missed it, he was probably the best fit for the Eagles among safeties competing at the Senior Bowl. Drummond has the ability to cover slot receivers, and was a playmaker for Michigan State, grabbing eight INTs since 2013. He is also a good tackler, finishing first on the Spartans' D in solo tackles in each of the last two seasons. Projected round: 3rd.

When we did our defensive line positional preview, we spoke about Smith as a potential option for the Eagles in the draft. Here's what we said:

Mississippi State lined Smith up all over their defensive front. He primarily plays DE, but they stood him up on occasion on the edge, and they even lined him up at NT on obvious passing downs. Smith has the versatility to be an effective two-gapping defensive lineman, but also get after the passer on obvious passing downs, as he had seven sacks in 2014. Smith would likely have to put on some weight to play in the Eagles' scheme.

The strength of the Eagles defense is on the defensive line, where they are not only good, but they're young. The Eagles certainly don't have a big need to draft a defensive lineman high in the draft. I was viewing Smith as a defensive lineman, but in speaking with Tommy Lawlor of IgglesBlitz.com during practices, Tommy saw Smith as a potential fit in the Eagles' scheme as a predator (Trent Cole's OLB position). If the Eagles think Smith can play in space on the outside and be competent in coverage, Smith would give them a pass rushing presence on the outside who can help allow the Eagles to be "multiple," or have the versatility to show a variety of defense looks with players who can play several different positions.

The "versatile" moniker gets over-used this time of year with draft prospect (I'm guilty of it too), but Smith truly is the kind of versatile player Chip Kelly and Billy Davis would likely value. Smith was impressive all week in practice, and had a sack-fumble in the game. Projected round: 2nd.