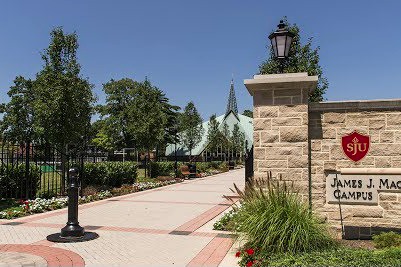 St. Joseph's University announced Thursday the receipt of a $50 million gift from a distinguished alumnus and his wife, marking the single largest donation in the university's 166-year history.

The gift comes from James J. Maguire ('58) and his wife Francis, who together credited the university's Jesuit education as a transformational influence both academically and personally.

"Saint Joseph’s University is where my life changed,” Maguire said in a statement “Early in my college career, I struggled academically but it was the Jesuits who saw my potential and nurtured it, setting me on a path for success. I have never forgotten that it was at Saint Joseph’s where people first believed in me and I have lived my life – professionally and personally – embracing the values that are the foundation of a Jesuit education."

University president Mark C. Reed said the funds will significantly raise the endowment at St. Joe's and will be used to support scholarships, financial assistance and the expansion of mission-centered programs.

“This is a historic and game-changing gift,” Reed said. “This investment will advance academic excellence and will increase student access through a major infusion of endowed funds for scholarships and financial assistance – top strategic priorities. The significant impact on our endowment will benefit students and faculty for generations."

Maguire spent the majority of his career in the insurance industry, forming Philadelphia Insurance Company in the early 1980's and later merging the business with Japan's Tokyo Marine Group in 2008. He and his wife now lead The Maguire Foundation, which provides funding for education in the arts and humanities and also works to alleviate hunger and homelessness.

"SJU has bold intentions and a vision to expand our reach and raise our profile regionally and nationally. To do so requires all of us associated with SJU to think and dream big, and to stretch to support our ambitions," Reed said. "Jim and Frannie Maguire have set the bar high for us all to follow, and I am so grateful to them for their past and present support and the impact they have made on our students, faculty, and campus."