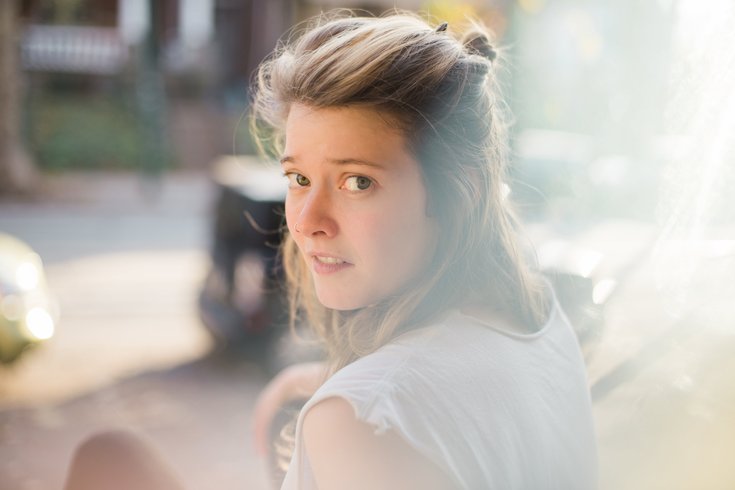 Abi Reimold seems torn about pursuing a career in music, yet she has a relentless drive to keep making it. Her debut album, "Wriggling," is ruthlessly cathartic, an unashamed exercise in self-exploration.

“This is just me being vulnerable, I’m not sure how much I want to monetize this or let other people get the money for it,” she told me in West Philly just after the album's January release.

"Wriggling" is an apt title for such a frequently discomforting record, an album that flits between tender folk and surprising, acute attacks of loud grunge rock. The cover art, a pristine overhead shot of an open can of worms, is playfully heavy-handed by comparison. But the image, which the 23-year old Reimold shot herself, has its obvious gloom: there’s no putting this stuff back.

Lyrically, "Wriggling" is hyper-specific. Reimold wrote most of the record in the winter of 2014 and she sings many of the songs at a constant and apparently specific “you.” They’re not lullabies or love songs, but intense bouts of struggle and angst. Earlier this year, in an interview with Stereogum, Reimold offered a jolt of context: “I know that in a lot of my songs, I personify mania as an abusive relationship, one that’s so much fun to hang out with but that takes too much from you.” It’s a crucial revelation that so much of the pain on the album is internal. On “Feed,” the album’s second track, Reimold sings a stunning opening line: “Shopping for your brand of darkness, exalt it,” and later wonders, “Am I a vacuum in your absence?”

“The way I dealt with whatever was happening was just writing songs and then moving onto the next part of my life,” Abi said. “So when the whole record came out I cried for like a couple days. When I was finished with it I didn’t even listen to it or anything. When other people started listening to it or writing about it [recently] I started crying a lot. Not in a bad way, but kinda just letting some stuff out.”

"Wriggling" bears out Reimold’s turmoil musically as much as lyrically. “For this record I really wanted the songs to have a lot of variety,” she said. “I wanted the listener to be surprised and confused when they listen to it, I guess. And not to be bored, hopefully.” The album’s first song, “Arranged,” epitomizes the effect: Reimold’s singing starts out with an awkward, sing-songy innocence, but after a buildup she bellows over distorted guitars in the same cadence. Elsewhere too Reimold uses "Wriggling" to push her own limits, stretching and straining her voice as much as her psyche.

The album plays out in the order Reimold wrote the songs, and while there’s no strict narrative to burden the track list, there’s an undeniable sense of time passing and distance traveled. On “Vessel,” which arrives a little after the halfway mark, Reimold sounds weary and empty, but the lyrics are precise as ever: “Touch me but I may not feel / You can pour and pour but I will not fill.” The song offers up a strained, tormented beauty.

If "Wriggling" is an extended snapshot into a formative period of Reimold's life, her producer, Mumblr drummer Scott Stitzer, was pivotal in bringing out the color. “I demo’d everything with Scott before [Mumblr] went on tour and then kinda sat around when they were on tour,” she said.

Reimold credits the “punk party, ex-Temple scene” for their meeting and has doubled down on the collaboration with Stitzer for her next album, which they started recording earlier this month.

“He’s just a really special producer,” she said. “Instead of listening to a record and saying, ‘How can I make sure this record sounds good so that I sound good as a producer,’ he comes to a record like, ‘Who is this person? What are they trying to say? How can I help them express themselves?’”

It’s a perfect fit for Reimold, who admits she writes songs out of emotional necessity more than an isolated urge to share something. “If I didn’t put out the record, if I didn’t record the songs, the songs still would have [had] a purpose,” she said. “That’s also why it’s weird. I’m getting this weird attention for this very personal thing that’s already fulfilled itself.”

Two years removed from the experiences that informed "Wriggling," Reimold is already on to a pair of new projects. Her just-formed punk band Fake Boyfriend, a trio that also includes guitarist Ashley Tryba and bassist Sarah Myers, plans to release their debut EP later this month and Reimold hopes to release her sophomore solo album early next year.

“It’s been frustrating me right now because I’ve had the first record written for so long,” she said of her debut. “I wrote it in 2014 and now it’s 2016, it’s finally out. While I was working on recording the last one, I wrote a whole other one. ... I’m really excited to get the next record out because I feel like it’s gonna be a lot more mature and a lot more representative of where I am right now.”

As she deals with the public reception of "Wriggling" and maneuvers the accolades, Reimold seems intent on preserving something incorruptible.

“I’ve been thinking about this a lot recently, I think I just need to make sure that I keep songwriting that’s something sacred for myself and for me. I need to keep it something that’s for me.”