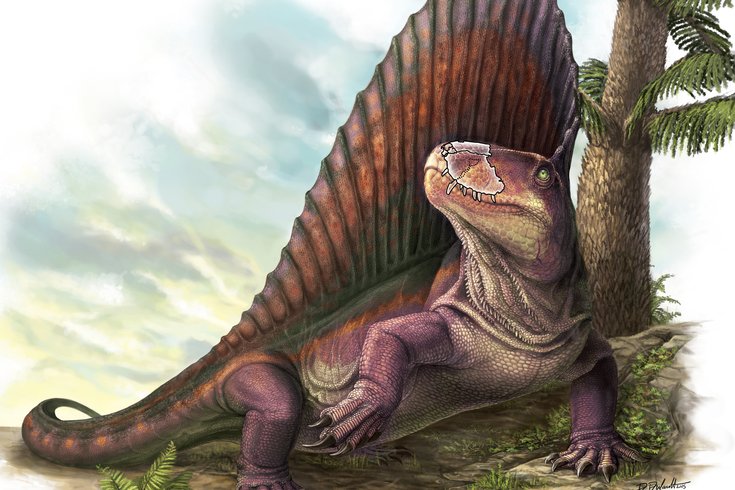 Dimetrodon is a mammal-like reptile that roamed North America some 40 million years before the dinosaurs.

Researchers long considered a fossilized jawbone housed at the Academy of Natural Sciences of Drexel University to contain a specimen of a unique reptilian from the Permian Age.

But a new discovery determined the fossil — a jawbone with lengthy, serrated teeth — actually belongs to the genus Dimetrodon, a famed mammal-like reptile that preceded the dinosaurs by some 40 million years. The discovery provides researchers new clues regarding the geographic range of Dimetrodon.

For years, researchers had recognized similarities between the fossil, discovered on Prince Edward Island in 1845, and the various Dimetrodon specimens discovered in Texas and Oklahoma. No one was ever able to determine that the specimens emanated from the same genus until a team of Canadian researchers used CT scans to take a closer look last year.

"This is something that in the last 10 years, especially, it's a new tool for paleontologists," said Ted Daeschler, the Academy's vice president for collections. "CT takes a series of X-rays through a bone, through a body or through a hunk of fossil. As long as those X-rays can differentiate between what is bone and what is surrounding rock, you can then look at each slice; you can assemble the slices in the computer and see through the fossil in three dimension."

The Dimetrodon fossil, at left, is shown beside the CT scan used by the Canadian research team led by Kristin Brink of the University of Toronto Mississauga. (Photo Courtesy of Kristin Brink)

Dimetrodon is considered a "household name" among prehistoric creatures, Daeschler said. Those unfamiliar with the name might recognize Dimetrodon as the giant, lizard-like creature with a large sail on its back.

Researcher Kristin Brink led a team of researchers from the University of Toronto Mississauga, Carleton University and the Royal Ontario Museum. Their discovery was published earlier this month in the Canadian Journal of Earth Sciences.

The discovery shows that Dimetrodon might have ranged across much of North America. But a lack of Permian rock on the Atlantic side of North America makes proving that range difficult.

"The fact is that there isn't much rock of that age between Prince Edward Island and the Midwest and the Southwest," Daeschler said. "Certainly, the animal must have had a distribution that included most of North America. That's good data. That's really interesting. But we don't have the rocks preserved to leave that evidence (from) the rest of North America."

The fossil has fascinated researchers for years, Daeschler said.

A farmer discovered it buried in red sandstone when digging a new well on Prince Edward Island in 1845. It was sold to Joseph Leidy, a paleontologist and curator of the Academy. He named the specimen Bathygnathus borealis, or "deep jaw from the north."

Now that the specimen has been determined to be part of the Dimetrodon genus, it will be known as Dimetrodon borealis, marking it as a distinct species of Dimetrodon.

Typically, Daeschler said, the more historic name is kept when a pair of specimens are realized to be from the same animal. But because Dimetrodon is such a well-known name, researchers are using Dimetrodon, which was used to label the Texas and Oklahoma discoveries in the early 20th century.

"If one of the names is really entrenched  — even if it's the newer one — we'll stick with it," Daeschler said.