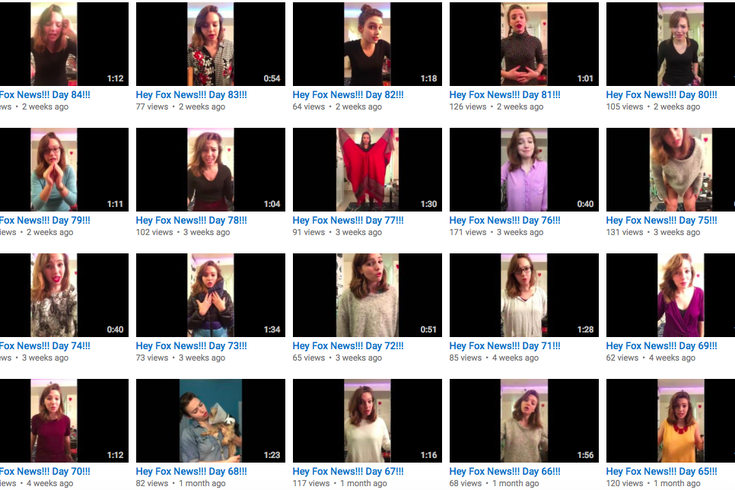 Screengrab via YouTube/Courtesy of Addie Weyrich

As of Feb. 4, Addie Weyrich has posted 100 videos on YouTube in her effort to go on the Fox and Friends morning show to discuss the morality of wearing leggings.

When PhillyVoice first introduced you to Addie Weyrich in November, she'd just posted her 15th YouTube video in a Quixotic quest to appear on the "Fox & Friends" morning show, where she hoped to discuss the morality of wearing leggings.

When we talked to the 19-year-old on Thursday afternoon – nearly three months later – she was preparing to record the 100th and 101st videos through which she vowed to “up the ante” in her mission that has, thus far, bore no fruit.

The Masterman grad’s campaign comes not from a place of admiration, but anger. You see, there was an all-male "Fox & Friends" panel months ago who passed judgment on the fashion of women paraded before them in a discussion about “what they’d let their daughters wear.”

While her commitment to the cause hasn’t landed her an appearance invitation – in the videos, she portrays a naïve young lady character seeking the show's acceptance and approval – she’s still plugging away in a subversive effort to shame the morning show for having the gall to think “they have control and authority to decide what I can and can’t wear.”

“Every time I make a video, I remember why I started this in the first place and get angry all over again,” she said.

In her 99th video, she presents an all-black outfit for “Fox & Friends” approval. Then, she notes that “tomorrow is the day I start asking, doing more, I might be taking some more risks. So, see you tomorrow, 'Fox & Friends!'”

And what were those risks?

On Thursday, Weyrich – daughter of local writers Ronnie Polaneczky and Noel Weyrich – set out to find “older white men” who look like the leggings panel in New York City’s Washington Square Park while wearing “leggings and a sweater, and it’s obvious there’s no bra” to get their feedback. (Editor's note: We'll update this post when that video goes live.)

Along the way, she said she’s learned that most viewers like what she’s doing and many can’t believe she’s still doing it.

Any negative feedback – primarily seen in the comments after a story on another Philadelphia dot-com that her mother sent an all-caps email warning to not read – comes from men who note “they’d rather see [me] doing videos topless while jumping on a trampoline,” Weyrich said.

“With sexism, racism or really any kind of ‘otherization’ or ‘othering,’ people are apprehensive of over-reacting,” she said. “Am I? Are these videos too much? Am I making mountains out of mole hills? No. F--- that. That’s the problem. I shouldn’t be apologizing. I still can’t believe they think they had the right to tell me what to wear.”

Weyrich sees the 100th video as an important milestone. It could help her attract the attention of other YouTube posters with considerably larger audiences; websites like Buzzfeed, Mashable and Jezebel; and TV shows that could force "Fox & Friends'" hand.

If they back her campaign up – its preferred hashtags are #HelpAddieDress, #DaddiesDressAddie, #IsThisOkay, #FoxNewsHelpAddie and #AreLeggingsPants – perhaps "Fox & Friends" will bring her in for a chat.

And no, she isn't the least bit surprised that they haven’t yet responded, as the show didn’t to a pair of emails from PhillyVoice as of 3 p.m. Thursday, either.

“No, no, no, no, no,” she responded when asked if she thought they'd give her a call. “The only way I think they will is if I went on 'Ellen' or a show like that and we said, ‘Hey 'Fox & Friends,' we want an answer.' That’s realistic goal-setting. Making 100 videos gives me a lot of credibility to try [to] make that happen.”

All of which is to say, don't expect Addie Weyrich to stop making her videos anytime soon, because she isn't about to let herself quit.