Philadelphians prepare for the week ahead after Winter Storm Jonas dumps 22.4 inches of snow 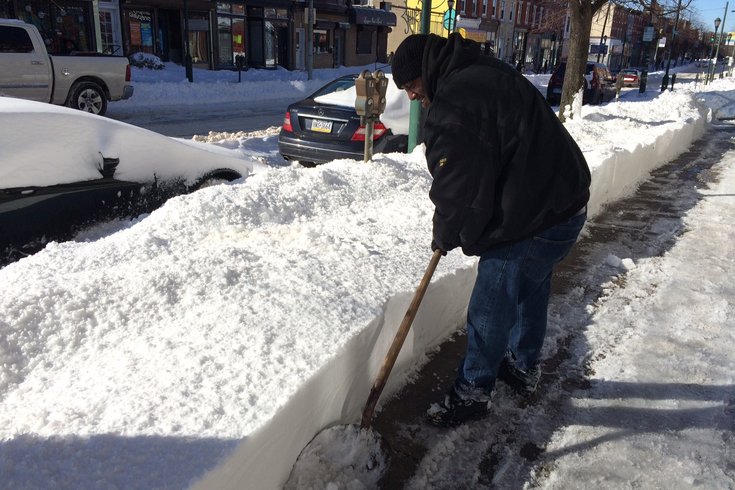 Joe Cruz clears snow from a sidewalk in front of an apartment complex in the Brewerytown neighborhood of Philadelphia on Sunday, Jan. 24, 2016.

The Curtin family spent considerable time Saturday gazing out the windows of their 21st-floor apartment in The Philadelphian, watching with fascination as Winter Storm Jonas dropped some 22 inches of snow on Philadelphia.

"They were like bands," Bill Curtin said describing how Saturday's bizzard alternated in intensity. "There was no visibility at times. Then five minutes later you could see the skyline. Then there would be zero visibility again."

With sunny skies and little wind, Sunday morning marked an opportunity to enjoy the snow or prepare for another busy workweek. Philadelphians bundled up and began shoveling their walkways and digging out their vehicles. Others walked their dogs and even attempted some jogging.

The Curtin family headed to the nearby Philadelphia Museum of Art, where about a dozen children were sledding down the museum's famous steps on Sunday morning. The remnants of Saturday's sledding scene – broken plastic sleds, abandoned cardboard slabs and a few empty beer bottles – littered the base.

"We wanted to wait for the wind to die down," said Bill Curtin, who has two daughters, 12-year-old Isabela and 6-year-old Abigail, with his wife, Fatima. "We're going to try the Art Museum. We didn't bring sleds. We'll watch the others risk their lives."

Alan Meltzer, a 68-year-old Center City resident who hadn't ridden a sled in a "long, long time," did just that. He grabbed a makeshift sled left behind from Saturday night and ventured partway up the steps before sliding down.

"For my age, it worked out well," Meltzer said. "I did one flight."

His wife, Michele, waited for him at the base. She simply was happy to get outside after a day indoors.

"I can't sit still," she said. "I just wanted to see what the city looked like."

Everywhere one looked, the snow glimmered in the sun. Scores of people worked to unearth cars buried in mounds of snow. Others cleared paths for pedestrians.

"It's not bad," Joe Cruz said as he shoveled snow from the sidewalk around a Brewerytown apartment complex. "The top of it is still soft. When you get to the bottom, because people walked on it, it's tough."

Cruz, of the East Oak Lane neighborhood, and a crew of four others were midway through their task to cleari about 20 properties, mostly in Brewerytown. The blizzard dumped nearly as much snow as Philadelphia averages for an entire winter, but Cruz was not going to gripe.

"This is a breeze compared to last year," he said. "Being that it's this late in the year (when) we got it, I don't think we should be complaining. It could be worse."

Chuck Eckert, of Fairmount, had little shoveling to do, thanks to strong winds that blew much of the snow to the other side of Poplar Street.

"It was less than two inches," Eckert said. "Usually, we get all the litter from the other side (blowing) to our side. This time, the wind was reversed."

In nearby Francisville, Andy Patrone cleared the remaining snow from the sidewalk outside his home. He had shoveled some snow Saturday before retiring inside to watch some Netflix and drink a few beers. Later, he meandered a few blocks to Urban Saloon, a local pub that remained open during the storm.

"It was crowded," Patrone said. "It was packed. It seemed everybody else had the same idea."

Well, not quite everybody.

While many found places to socialize or played in the snow, others enjoyed a quiet day inside. Darice Bouzarth, of Fairmount, binge-watched "Blacklist" and "Downton Abbey" while also completing some chores.

"I cooked breakfast, lunch and dinner for my husband," Bouzarth said. "We're usually not home together at the same time. We had a nice time."

But with the blizzard rolling out of town, people also began looking ahead to the work week.

Anne Markham, who on Saturday went sledding down the Art Museum steps for the first time, spent Sunday morning digging out her car. She had to catch a flight for work, but clearing her car was a precautionary measure.