Albino, piebald and leucistic deer are often confused and mythologized. This one was spotted in Washington County in August 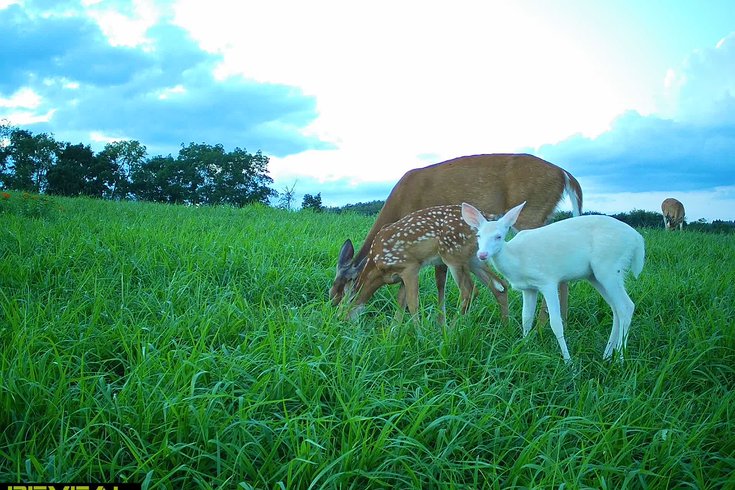 The white deer pictured above was picked up by a trail camera in Washington County, Pennsylvania in August 2022. The photo was voted the winner of the Pennsylvania Game Commission's summer trail cam contest.

Trail cameras sometimes offer an unusual look at the rhythms of the wilderness, showing animals in various states of oblivious daily existence. Most of the time, the videos and photos that surface are pretty mundane, but every now and then, a camera will pick up an uncommon sight.

The Pennsylvania Game Commission holds an annual summer trail cam photo contest inviting people to submit their best shots of wildlife from across the state. This year's winner is a photo of a white deer with two other deer in Washington County in early August. The photo was submitted by S. Dillon, who will get a new trail cam and some Game Commission merch.

Albino and piebald deer are incredibly rare — only about one in 30,000. A deer with albinism lacks pigment throughout its body and has pink eyes. Piebaldism, another genetic mutation, also can give a deer a mostly pure white appearance with traces of brown in its fur.

The deer observed on the trail cam in Washington County looks to be all white, although the eyes are difficult to make out in the photo. The pink nose would indicate that it's albino. The animal's hooves, which are obscured by the grass, should also be pink if it's an albino deer.

A third option would be a leucistic deer, another genetic abnormality, but they tend to have black noses, according to the Cool Green Science blog's discussion of often-confused distinctions.

Despite the large population of white-tailed deer in Pennsylvania — they number more than 1.5 million — it's incredibly rare to observe a white deer in nature. They've often been mythologized, most notably in Celtic tradition with the legend of the white stag of Edinburgh. The Celts believed the animal was a messenger from the otherworld that symbolized the existence of a realm beyond our own.

Many hunting cultures historically have thought that killing an albino deer will bring on a curse or a run of bad luck. A few states even prohibit killing them. Most hunters will never get the chance because they'll never see a white deer.

Albino animals tend to fare poorly in the wild because they have bad eyesight and are conspicuous to predators, which only increases the rarity of observing them. This one appears to be a juvenile.

The 2022 Summer Trail Cam Photo Contest finalists are in! 📸THANK YOU to everyone who sent in a photo this summer. Now...