The animal appears to be the famed Wally Gator who's gone viral in recent years with owner Joie Henney in York, Pennsylvania 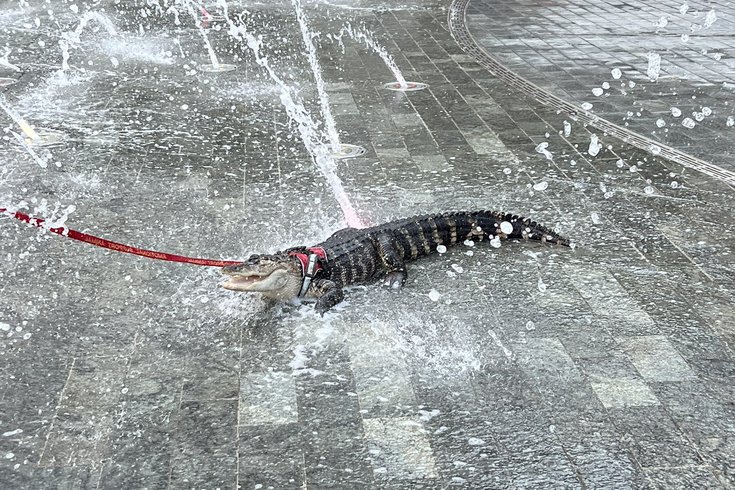 An emotional support alligator showed up with his family at LOVE Park on Friday afternoon. The reptile appears to be Wally Gator, the viral sensation owned by York, Pennsylvania resident Joie Henney.

If you happened to walk through LOVE Park on Friday afternoon, you weren't tripping if you saw an alligator.

Visitors at the Center City park were surprised by the unexpected appearance of an emotional support gator, who splashed around in the spray ground and appears to have thoroughly enjoyed the fine mist.

Britt Miller was taking a walk with her baby daughter when she saw the commotion in the park.

This is NOT a drill there is an emotional support alligator in Love Park pic.twitter.com/xU7TTs6y2V

"We were just walking by LOVE Park and saw this kid playing with an alligator in the fountain," Miller said. "Of course, there was a ton of people around taking pictures. The girl (who had the alligator) seemed to be with her family, who were sitting off to the side. They were super friendly. People were picking up the alligator, petting it, all sorts of stuff."

Ok this is Wally, he is accepting pets pic.twitter.com/ui0unEhhAF

Miller learned that the alligator's name is Wally, which has prompted speculation that it's the famous Wally Gator from York, Pennsylvania. The seven-year-old American alligator, measuring roughly five feet in length, was adopted in 2016 by reptile enthusiast Joie Henney.

The red harness worn by the gator in LOVE Park appears to be the same one worn by Wally in photos from a 2019 story in the York Dispatch. Honestly, how many emotional support alligators named Wally can there be in Southeastern Pennsylvania?

Miller said Wally didn't seem to be bothered at all by the attention he was getting at LOVE Park.

"It seemed totally calm, I guess, for an alligator, you know?" Miller said. "It wasn't reacting at all."

Even so, Miller decided that she and her three-month-old child would not tempt fate by petting Wally.

Lately, Wally has been getting a lot of press as the leading vote-getter in America’s Favorite Pet Animal Kingdom, a popularity contest that supports animal rescue and rehabilitation. The winner of the contest will get $10,000.

Henney, who is battling cancer, also has a GoFundMe page to help cover the cost of care for Wally and his other reptile friends.

Alligators are among the most vicious predators on the planet, and although legal to keep as pets in some states, including Pennsylvania, it's strongly discouraged unless the owner is skilled in training and caring for the animal's needs. Wildlife experts have pushed for new laws banning alligators as pets, since they're often abandoned when they grow too large for their owners to care for them.

In this case, Wally seems to be about as docile and happy as any alligator could hope to be. His exploits with Henney can be followed on Facebook and TikTok, where his videos have amassed some 3.7 billion views.