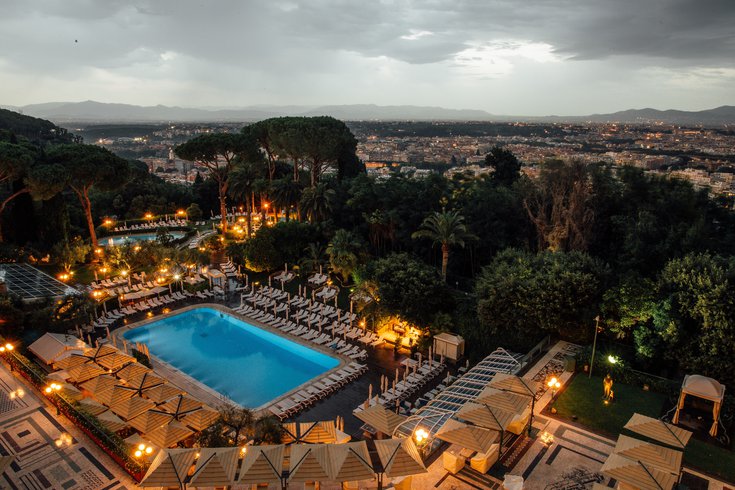 FOX 29 anchor Alex Holley, a native of Texas, helped her grandfather find a safe place to stay during the state's devastating winter storm. He now has a future invitation to visit the Waldorf Astoria hotel in Rome, above.

As Texas works to recover from February's deadly and debilitating winter storm, the grandfather of FOX 29's Alex Holley will be rewarded for plowing through it with a trip to Rome.

The "Good Day Philadelphia" co-host shared her grandfather's predicament in Texas in an Instagram post last week, explaining that she had arranged for him to stay at a hotel after his home lost heat and temperatures dipped into the single digits.

"My parents were so excited they told Grandpa I got them a room at the Waldorf Astoria LOL it’s nowhere near that fancy but here they are pretending!!" Holly, an Irving, Texas native, wrote in the Instagram post, which included a heartwarming video of her grandfather and several other photos.

To make light of the situation, Holley's parents taped a sign to the hotel room door that read, "Waldorf Astoria," which is the flagship luxury brand of Hilton Worldwide.

In an update posted to Instagram on Wednesday night, Holley said the initial post got the attention of the Rome Cavalieri hotel, part of the Waldorf Astoria collection of hotels.

"Well, the actual Waldorf saw his videos and decided to give Grandpa a little room upgrade...in ITALY!!" Holley wrote. "Certainly a lot better than I could do lol."

In a surprise reaction video, Holley's grandpa learned that the hotel has offered him and a guest a complimentary three-night stay at the Italian hotel.

"Grandpa is so excited and can’t wait to visit once it’s safe!!!" Holley wrote.

This is the exact turn of events one might expect to see featured on Holley's new late night show on FOX 29, "The Feed AT Night," with co-host Thomas Drayton.

Grandpa Holley is in for a real treat down the line. The hotel includes an award-winning spa, three outdoor swimming pools and one indoor pool, and exclusive experiences on the property and in Rome, all of which will apparently be included in the package.

It's a happy outcome for Holley and her family, but the FOX 29 host is aware that Texans continue to suffer from the impact of the storm. More than 4 million people were left without heat and electricity at the peak of the emergency as the state's power grid buckled. Nearly 80 people have died as a result of the crisis.

"Thinking of all the millions of people across the state who still don’t have power or water," Holley wrote. "Continuing to pray for y’all and my home state."