The "Good Day Philadelphia" host laughed off the fall on social media, saying she's 'banged up by ok' 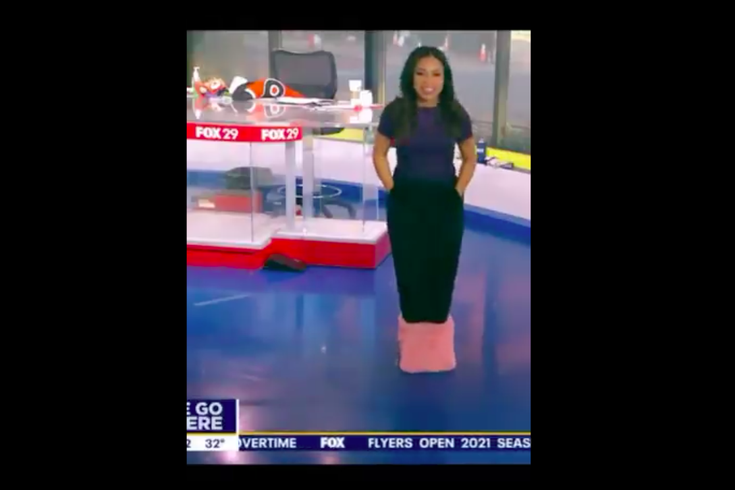 For some of us, 2021 has gotten off to a rough start. Count FOX29's Alex Holley among them.

The "Good Day Philadelphia" anchor shared a video of herself falling on air Wednesday morning. Holley, who had both of her feet stuffed into one large slipper, was hopping toward the camera when she took a face-first fall.

MORE: Netflix has a new movie coming out every week of 2021

After the thud of Holley hitting the floor, other can be heard laughing in the background.

"To those who saw this live and asked … I'm feeling pretty banged up but ok," she tweeted. "Getting more tests to make sure my face still works." The fall caused her to miss work Thursday.

"I'm so sorry, I laughed so hard when this happened, before I knew you were hurt. Get better soon!!" Kelly Myers commented.

This isn't the first time Holley's taken a tumble on live television. In November, she tweeted another video of her falling from her desk chair.

"I just fell off my chair on LIVE TV in case you're wondering how my Friday the 13th is going," Holley tweeted.

The 30-minute show, which debuted this week, airs weeknights at 11:30 p.m. It covers quirky social media posts and trending topics from earlier in the day. So far, they've covered TikTok trends and called on members of a Facebook feed to give feedback and reactions.

"We always love Philly," Holley said recently. "Philly won't be lost in this, for sure. If there's one thing about our station, whether it's day or night, it's that we keep it local. But I do think that it's going to be a mix."