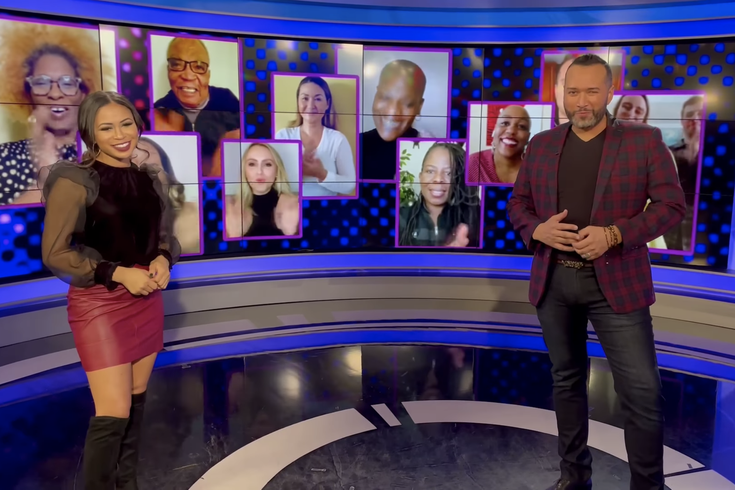 There's a new late-night TV show in town, putting a Philadelphia spin on the never-ending carousel of trending topics that fuel our laughter and amusement.

The 30-minute program, airing weeknights at 11:30, takes viewers on a jog through the quirky social media landscape of the day.

To call it fluff would deliberately deny a reality of life in 2021: Most of us crave a good laugh that we can share with a friend, a partner, a colleague or a family member. Headline news leaves many of us with an inextinguishable sense of dread and frustration at night, a heaviness that is warranted but far too often overkill.

What "The Feed AT Night" hopes to do is counterbalance that feeling, reminding viewers of the human bonds that internet culture furnishes from every corner of the earth, whether it's a derpy pet or the teenagers you worry will bring doom to us all.

"A lot of times, especially in quarantine, I find that a lot of the way people connect is sending funny videos, looking together, laughing," Holley said in a recent interview. "We want to make sure there's a light element to it, and obviously it's late at night, so we want to keep it a little light and fun. But at the same time, we're not going to shy away from what people are talking about and what people are looking at."

Monday night's episode jumped right into a TikTok trend, "I like ya cut G," that involves planting a healthy smack on the back of someone's head when complimenting their hair cut. What began as an inane prank among teenagers percolated its way to unsuspecting star chef Gordon Ramsay.

Are things like this going to solve world hunger? Definitely not, but that's kind of the point. A little bit of laughter can go a long way, and what "The Feed AT Night" promises is a fun look at how our culture is flavored by ordinary people, the many faces of virality who have a knack for executing interesting ideas.

For the premiere show, Drayton and Holley interviewed Daniel McDonald, the Dallas-based TikTok creator who's made a name for himself by asking the owners of luxury cars what they do for a living. He gets a lot of people in private equity and software development, but now and then he'll catch a pro athlete or an actor.

Some other stops along the first episode of "The Feed" included Buffalo Bills wide receiver Stefon Diggs flossing during an NFL game and a small dog growling at an even smaller hamburger.

The show also features "Nosy Neighbors," during which real estate listings are virtually toured and reviewed by opinionated gawkers, in what will be an ongoing segment.

On Facebook, "The Feed AT Night" invites a viewers to join the virtual audience and help steer the show's direction by providing feedback and reactions to Holley and Drayton.

"We want to know what people are talking about and how the show's going to evolve," Drayton said. "What they like, what they don't like. As many voices as we can get in the show."

The Feed AT Night Virtual Audience

If you want to be part of our virtual audience just post a video below of you cheering for Alex and Thomas. Make sure the video is at least 30 seconds. After you post make sure to watch The Feed AT Night every weeknight at 11:30pm to see if you made the show.

As the hosts get a feel for the new show, they plan to incorporate more of what's unique to Philadelphia.

"We always love Philly," Holley said. "Philly won't be lost in this, for sure. If there's one thing about our station, whether it's day or night, it's that we keep it local. But I do think that it's going to be a mix."

For FOX 29, "The Feed" figures to be an interesting experiment for the 11:30 p.m. slot, when many viewers are winding down and looking for something easy to digest and other networks are broadcasting episodes of their own well-established, late-night franchises.

"It was one of those things that just made sense," Holley said of the show's creation. "We already feel such a great connection with our viewers and people across the Delaware Valley, and we already know that we're just like them. We're scrolling, too. We're going through our phones and want to talk about it. To have a different space, in a more relaxed environment, to talk about what's going on, I think it's just too good to pass up."