Behind the 'Northeast Philly dude' painting that inspired the memes 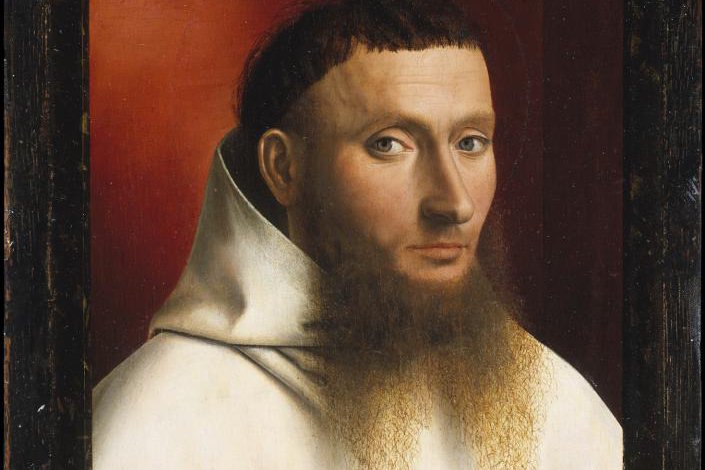 "Portrait of a Carthusian," pictured above, is a 15th century painting by Petrus Christus, an early Netherlandish master who worked out of Bruges. The painting has become a social media sensation in Philadelphia, where memes liken the figure in the portrait to a "Northeast Philly dude."

A beautiful thing happened this week in our city: a supernova of memes immortalizing the archetype of the "Northeast Philly dude," the one true dawg who lives everywhere in our midst.

It all began with an innocent tweet from Colt Shaw, a local journalist who now covers clean energy for New Project Media. Shaw offered his astute impression of "Portrait of a Carthusian," a famous painting by Petrus Christus. The Early Netherlandish master was active in Bruges in the 15th Century.

there's something comforting in continuity, like the fact they had northeast philly dudes all the way back in 1400s Belgium https://t.co/vzAKsMEFw9

This is so spot-on it hurts. There's the immense, wispy beard. The cowl, an ancestor of the hoodie. There's the Caesar haircut and Marshall Mathers expression. All that's missing is a Jimmy Butler Sixers jersey to complete the outfit and a Newport tucked behind the ear.

Since that tweet on Dec. 23, memes depicting the Northeast Philly dude in his native milieu have been propagated across social media. A definitive sampling can be found in this Facebook post, with scenes from local bars and SEPTA stations, sacred intersections, the Eagles Super Bowl parade, Philadelphia Mills and any other signature you could fathom.

Shaw told PhillyVoice on Tuesday that he first saw the painting on a Twitter account that shares medieval art.

"It just hit me, like, man, I've seen this guy walking down the street," said Shaw, 25, a Bucks County native whose family is from Northeast Philly.

The tweet picked up steam slowly at first, collecting 150 or so likes before a couple of retweets "sent it into orbit," Shaw said.

Typical meme anarchy took over from there, with a shyster Instagram account scrubbing Shaw's name (for shame) and an organic burst of original content spilling forth in all its glory.

The great Petrus Christus could never have imagined his original piece from 1446 would resonate so mirthfully in the New World of the future. He spent centuries in anonymity, a successor of the revolutionary Bruges painter Jan van Eyck. The Bruges school of painters evolved the style of the Italian Renaissance, favoring more natural and realistic details over the idealization of their subjects.

Very few Christus paintings were signed and dated by him, leaving the task of identifying his works to modern art historians. Much of his output had been confused with the work of van Eyck, or considered derivative of the former master, before scholars in the 19th century recognized his technical prowess, inventive style and meticulous attention to detail.

Five of Christus' 30 surviving paintings are housed at New York City's Metropolitan Museum of Art, including "Portrait of a Carthusian."

The level of detail in the portrait is impressive, right down to the fly that sits at the base of the picture frame. This is considered a notable example of trompe-l'œil ("deceive the eye"), a technique that creates the optical illusion of three dimensions.

A Khan Academy lesson examines the distinguishing features of the Christus painting, including this interpretation from Dr. David Drogan, a specialist in Renaissance art and frequent lecturer at the Met.

"The inclusion of a fly is maybe to remind us that life is short," said Drogan. "That mortality is always with us and death is always around the corner — because flies, of course, are normally found around things that are decaying. So this fly at the bottom is to remind the viewer that even though this person might be in the flower of his life and looking very vital and strong and living, that always death is around the bend."

As for the young man in the portrait, the Frick Collection in Pittsburgh notes that his appearance suggests he probably wasn't a strict Carthusian. They were one of the most austere monastic orders of the late Middle Ages:

The sitter’s lack of tonsure and beard identifies him as a lay brother, that is, someone who had taken a vow but practiced a more relaxed version of Carthusian life. It seems to be the earliest recorded portrait of a cleric in which the sitter is not shown praying. The young man’s confident, outward gaze suggests that the portrait was intended for a secular setting. It may have been commissioned by his family to celebrate his entry into the order and invoke the presence of the absent sitter, now committed to a life of seclusion.

The Frick Collection had a 2019 exhibition that featured works commissioned in the 1440s by the Carthusian monk Jan Vos, who was appointed prior of the charterhouse in Bruges in 1441 and would presumably have known the young subject of this portrait.

Centuries later, Northeast Philly lay brothers seclude themselves in the best finished basements the city has to offer. These shrines to Philadelphia sports are centered around enormous 4K TVs, muted and synced with radio broadcasts. Framed memorabilia, pennants and old Eagles schedules decorate the walls. Bobbleheads and 90's basketball figurines (the ones with the stands) are fixed on the narrow ledge above the mini-fridge.

This is the Northeast Philly dude's sanctum, his place to scream that the Eagles should be running the f***ing ball more.

Shaw said he doesn't believe any of the references to Northeast Philly dudes — the Kevins, Shawns and Ryans we all probably chill with —  are negative.

"I don't know if it's mocking," Shaw said. "I guess it could come off like that, but I definitely think it's almost just like a curio of the Northeast. It's almost like an outdated one. I would have thought that hair cut — me and my brother call it the 'boul' cut — I remember seeing that as a kid. I would have thought it would be gone by now, but it lives on. It just has staying power, I don't know."

Philly is already home to many great works of art, from Rubens and Snyders' "Promethius Bound" to Matisse's "Le Bonheur de vivre" and Duchamp's "Étant donnés."

Will an intrepid artist now join forces with a Northeast Philly dude in a Matisse Thybulle jersey? If so, just be sure to put a spotted lanternfly on the frame.