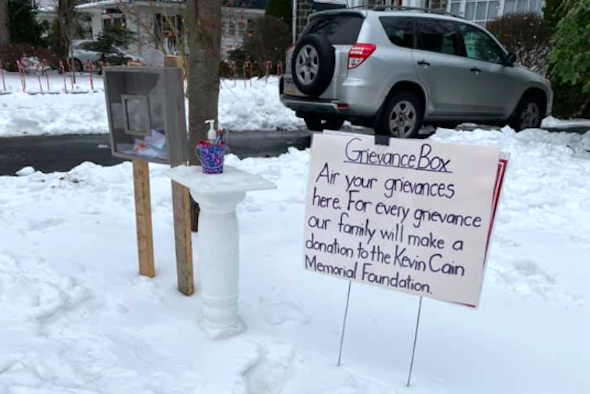 A front lawn of a Delaware County home became a collection site for the 'airing of grievances,' a Festivus tradition from the long-running NBC sitcom 'Seinfeld.' For each grievance received, a donation is made to the Kevin Cain Memorial Fund, which supports cancer patients and their families in the Delaware Valley.

In a year full of heartache and disruption, the timing could not have been more perfect for a celebration of Festivus, the obscure holiday popularized on "Seinfeld" by the late Jerry Stiller as Frank Costanza.

The Dec. 23 secular celebration was invented by the family of Daniel O'Keefe, who was a writer on "Seinfeld" when the show parodied the holiday in the 1997 episode titled "The Strike."

As Frank Costanza explains to an intrigued Kramer below, Festivus eschews the commercial and religious trappings of Christmas in favor of a family "airing of grievances."

Throughout the month of December, a family in Havertown, Delaware County, has been collecting "grievances" from the community at the Festivus display on their front lawn.

If you are strolling down Brookline Blvd, look for the Festivus sign on the 200 block. Here you can air your grievances...

"Air your grievances here," a sign on family's front lawn reads. "For every grievance, our family will make a donation to the Kevin Cain Memorial Foundation."

The foundation provides assistance to cancer patients and their families, from paying overdue bills to delivering meals, assisting with vacation expenses and covering other medical and utility costs. More than 1,000 families have been helped by the foundation during the last 15 years, mostly from fundraising through the annual Kevin Cain Make My Day 5K Run & 1 Mile Walk in Havertown.

Katie McByrne and Brian Friend, the organizers of the Festivus display, told FOX 29 the box has been filled and emptied of grievances three times.

Jerry Seinfeld suggested Wednesday that the airing of grievances might be paused in 2020 for the sake of decency after such an awful year.

Maybe just this once, just for this Festivus 2020, we take pass on the “Airing of Grievances”..

But it's hard to argue with converting those grievances into support for families who need it. At least this year, the grievances aired in Havertown will be integral to the feats of strength these families show on a day-to-day basis.