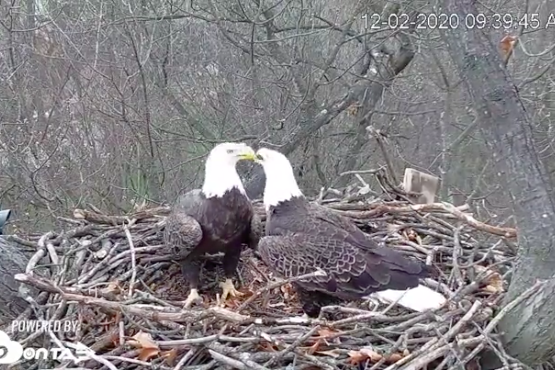 The eagle cam in Hanover, Pennsylvania, is in its seventh season and will offer 24-7 footage from the nest at Codorus State Park.

Fans of Pennsylvania's annual eagle cam livestreams can now tune in again to keep an eye on the nest in Hanover, where a seventh season of bird-watching got underway this week.

The Hanover stream, fixed on a nest at Codorus State Park, is one of two eagle cams managed by the Pennsylvania Game Commission in partnership with HDOnTap and Comcast Business. The other one, the Farm Country Eagle Cam does not yet have a date set to go live for the 2021 season.

The 24-7 stream in Hanover offers two different views and is accompanied by a blog by raptor biologist Zoey Greenberg, who offers educational insights, video highlights and photos from the nest.

"This is one of our most popular live cameras," HDOnTap co-founder Tiffany Sears said. "Since 2015, viewers have enjoyed ​over 40 million hours of 24-7, live HD video​ and audio from the nest, as well as daily time-lapse clips on screens worldwide."

Viewers have been somewhat disappointed during the last two seasons. No chicks hatched after a clutch of two eggs were deemed unviable.

Bald eagle populations have recovered impressively in the last 15 years in the northeastern United States. They're no longer endangered in Pennsylvania, but they remain protected by the Bald and Golden Eagle Protection Act and the Migratory Bird Protection Treaty Act.

"The resurgence of bald eagles in Pennsylvania represents one of the greatest conservation success stories in the country," said Steve Smith, director of the game commission's Bureau of Information and Education. "It's a product of decades of planning and hard work by Game Commission staff. We are excited for this opportunity to once again bring this pair into homes and schools across the country through the livestream."