Helmet cam footage of the pup's escape from the blaze in Lancaster County was posted to the Lititz Fire Co.'s Facebook page 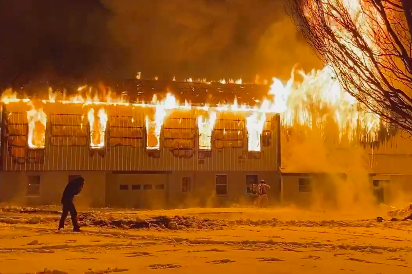 Firefighter Ryan Balmer, of Lititz Fire Co. No. 1 in Lancaster County, Pennsylvania, rescued a dog trapped inside a burning barn in Warwick Township on Saturday, Dec. 19, 2020.

A lucky dog was rescued by a brave firefighter who entered a burning barn in Lancaster County last weekend, and the scene was caught on video, giving the internet a first-hand look at the risky feat.

The Lititz Fire Co. was among several units to respond to the blaze in the 900 block of Erbs Quarry Road in Warwick Township. Video shows the upper floor and roof of the barn engulfed in flames, but parts of the lower level had not yet caught fire.

Lititz firefighters later released footage from the helmet cam of Firefighter Ryan Balmer. A resident of the adjacent farmhouse had told Balmer that his dog was still inside the burning structure.

"Firefighter Balmer, wasting no time, cleared out a window to gain access inside of the barn to the room that the dog was reported to be in," the Lititz Fire Co. wrote on Facebook. "He then climbed in through the window, picked up the pooch and lifted him through the window and back outside. The excited and scared pup can then be seen running from the Barn towards her nearby humans."

As promised here is the helmet camera video from Saturday(12/19/20) nights dog rescue and barn fire. On Saturday December 19th, 2020 at 11:46pm Lititz Fire Company, along with several mutual aid companies, were dispatched to the 900 blk of Erbs Quarry Rd(Warwick Twp) for a Barn Fire. As the video begins you can see a resident of the adjacent farm house reporting to Lititz Fire Company Fire Fighter Ryan Balmer that his dog was still inside the barn. Fire Fighter Balmer, wasting no time, cleared out a window to gain access inside of the barn to the room that the dog was reported to be in. He then climbed in through the window, picked up the pooch and lifted him through the window and back outside. The excited and scared pup can then be seen running from the Barn towards her nearby humans. Typically when we arrive at a Barn Fire, especially when its fully involved when we arrive, we treat the situation as a “surround and drown” which means we surround the structure, protect any nearby exposures, and put massive amounts of water on the fire until it goes out. First in crews are responsible for stretching handlines, establishing water, etc… its not often a Barn fire is a rescue situation, but in this instance, it clearly was. We’re thankful for the quick actions of Firefighter Ryan Balmer on that day to save the life of the Pup! Thanks to the following Fire Companies for their assistance: Rothsville, Brunnerville, Brickerville, Manheim, Penryn, Manheim Township, Durlach Mt. Airy, West Earl, Hempfield Township, and East Petersburg. Thanks to Warwick EMS for their assistance on scene as well.

As you can see in the video, the dog appeared curious about Balmer but also reluctant to try to make an escape. The window pane may have been too high for the dog to reach with a jump, so Balmer ripped it from the frame and entered the barn to pull the dog to safety.

Fortunately, there were no injuries reported in the incident, and while the damage to the barn was substantial, at least the dog and his owner will be able spend the holidays together.