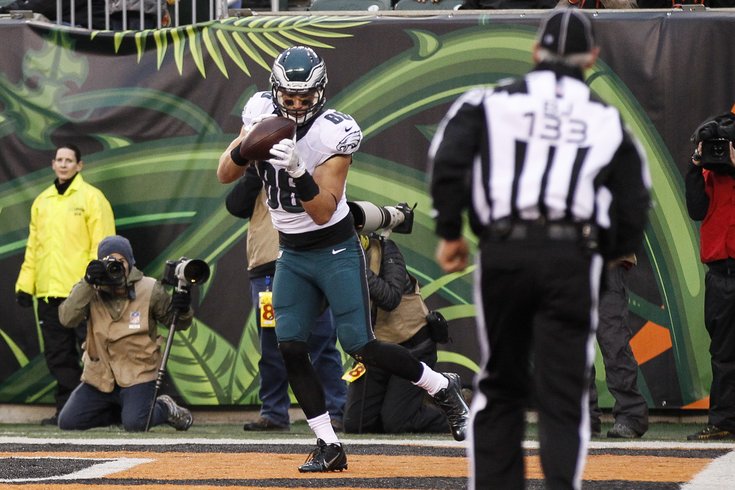 So Zach Ertz is Barry Sanders without Sanders' skill set?

During the first quarter of the Philadelphia Eagles' loss to the Cincinnati Bengals Sunday, Carson Wentz scrambled to his right on 3rd and long, picking up 10 yards before being chased out of bounds by linebacker Vontaze Burfict.

Along the way, tight end Zach Ertz shuffled out of the way of Burfict, who was in pursuit of Wentz. Here was the TV feed view that viewers saw on Sunday:

On Monday, Doug Pederson said that he prefers that his skill position players pick up blocks down the field if they can. (Duh).

"I haven't talked to Ertz yet, so I haven't seen him this morning," said Pederson. "Looking at the tape and watching where Carson was scrambling, of course, he was heading towards out of bounds, and I think he just pulled off at that point. That's all I can say about that, but I'm definitely going to ask him why.

"If he can pick up a block, obviously we ask our guys to turn and block. We don't ever want anybody to block from behind or anything like that, but at the same time, try to find a block downfield if they can."

On Tuesday, offensive coordinator Frank Reich seemed to defend Ertz's decision, that is until you read through the lines a bit.

"I have learned over the years to trust the players' instincts," said Reich. "I look back on it after... It didn't really jump out at me, honestly, the first time because Carson was so near to the sideline. The block was a non-factor in the play. Sometimes you get a shot like that and you take it. Other times, to be honest, I played with a guy, Hall of Famer Barry Sanders, who was famous for avoiding hits.

"That's why he played all the time. He was never hurt. You saw when Burfict hit DGB – he got hurt almost as DGB did. So, there was a side of me, when I look back on it, I want Zach playing the last four games. It was a non-factor in the play. You want to tell the player, ‘Hey, go ahead and knock him out,’ but sometimes you have an instinct as a player, and over the years I've just learned to trust the instinct of the player."

Barry Sanders was 5'8, 200 pounds, and conservatively one of the best five players in the league during his prime. If you're a 6'5, 250 pound tight end, you certainly don't want your coach comparing you to a 5'8 running back who was, in the coach's words, "famous for avoiding hits."

On Monday, when contacted for comment, Ertz released the same statement to multiple reporters. Here was his take on the play, via Tim McManus of ESPN:

"I could see that Carson was easily going to make it out of bounds, and thought the play was over by the time I reached Burfict. Carson & I have discussed it and there are no issues. Our full attention is now on beating Washington."

Above, Reich noted that the non-block was a non-factor on the play. While he's correct that ultimately Ertz's decision didn't affect the outcome of the play, Burfict was very much still a threat to hit Wentz, but didn't get a chance because another player forced him out.

A look at the All-22 film shows that Burfict might have gotten to take a shot on Wentz if Wentz hadn't ducked out of bounds to avoid Bengals cornerback Josh Shaw (#26), who came racing up from coverage to make the play.

We mark in the still-shot below where you can see Ertz made the decision not to block Burfict, as in, this is when he began his movement to get out of the way: 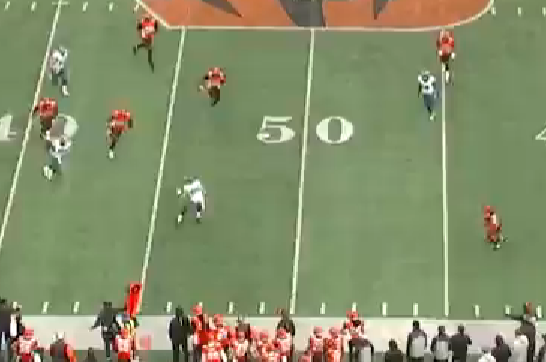 Could Wentz have "easily made it out of bounds" at the moment Ertz decided not to block the linebacker, as he suggests? Sure, as long as headed immediately for the sidelines. Would the play have been over by the time Ertz reached Burfict to block him? Hell no.

Not knowing that the corner is charging up from coverage, a block there might maximize the yards Wentz can get on the run. It also ensures that the linebacker won't get a shot on Wentz as he's trying to run up the field and eventually out of bounds.

Football players and coaches talk constantly about being physical. This play is the antithesis of that. If the Eagles want a team of Barry Sanders' (minus Sanders' skill set), that's what they'll get if they view this play as an acceptable act by a player being paid well to play football.

(And my apologies for beating this dead horse).