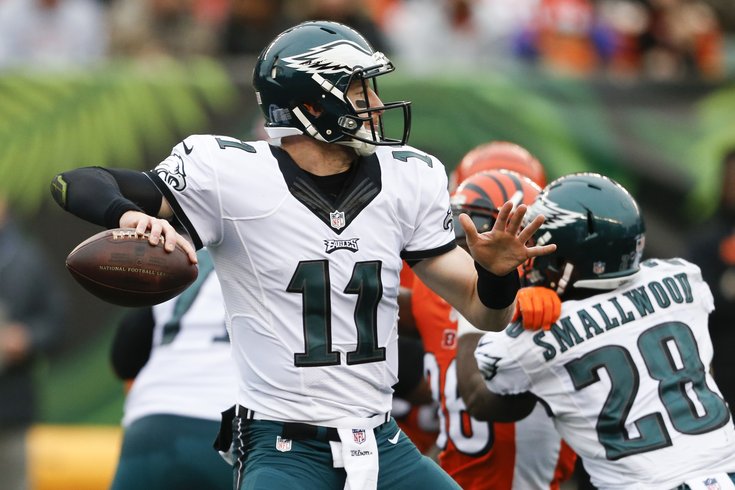 There are a lot of things going wrong for the Philadelphia Eagles right now. As head coach Doug Pederson said following his team's most recent loss — a 32-14 drubbing in Cincinnati — it's been "a collective effort, all three phases."

As we recently pointed out, the last thing Eagles fans want to see down the stretch is for their rookie quarterback to take a step back. Right now, he's the most important piece of the franchise — assuming he continues to progress. Wins would still be better than losses, but in terms of the big picture, Carson Wentz's progress should be their main concern right now.

I say concern because by any objective measurement, the 23-year-old from North Dakota is not playing as well as he was in the early stages of the season. Touchdowns. Interceptions. Accuracy. Yards. They've all taken a hit.

As has the team's overall record, which now stands at 5-7 on the year after starting 3-0.

Despite that, offensive coordinator Frank Reich thinks 2016 has been a net positive for the No. 2 overall pick.

"I think the quarterback position is such a unique position in that you're so dependent on the play of everybody else," he said Tuesday. "I think we go up and down together – quarterback is the [center] of it. I think, by and large, Carson is still doing a lot of really good things, still a lot of positive [things], even in a bad stretch. Two people can look at the same thing and see different results, and we have to own the negative results. But I still feel good about a lot of the things that he's doing, even in the adversity [of] the bad stretch we're in."

That's a nice way of saying he doesn't have much with which to work, especially at wide receiver. And it's impossible to refute -- even if he was largely working with the same supporting cast when he was named offensive rookie of the month for September.

On Monday Pederson was asked if, in hindsight, he thought it would have been more beneficial to stick with their original plan of "redshirting" Wentz for a year, allowing him to develop under their system before having him start.

"Well, that's hard to answer, because if we'd have had Sam [Bradford] here or whatever, yeah, I mean, you would have time to work on this," he said. "These are some of the decisions that I made back when the trade was made, that if there were going to be some growing pains, these were going to be some of the pains we were going to have to go through [together]. And just him understanding and him learning and us growing together as an offense. He and I growing as coach and quarterback together. It's all part of the process."

What, then, do make of Wentz's rookie season to this point? Has it been an overall success? Or does the fact that he's been trending in the wrong direction keep you up at night?

To try to answer some of the questions surrounding Wentz's struggles, we'll turn the floor over to Reich, who was asked about a number of the troubling things we've seen recently.

This has been a subject of debate recently, one that had been lingering during the preseason only be beaten back by a 3-0 start that saw seven touchdown passes before one interception. Now, it's once again a concern.

As the offensive coordinator and trying to help out in that regard a lot, for every player, mechanics, technique [and] fundamentals [are] critically important. You're always working at it. The higher level you get, the more you work on it. I think he's still completing a very high percentage of his passes when you look at it in the big scope of things.

That's not exactly an endorsement, but it's not terribly damning either. What is damning, however, is film like this:

But it hasn't been all bad for Wentz. [I highly recommend you read Fran's full film review, and not just this week's edition.]

Shot 3 - Three examples of Wentz's feet being clean as his timing and rhythm are perfectly in sync with the route concepts #Eagles pic.twitter.com/YjgNDOnSY6

These are the kinds of things that Pederson was hoping Wentz would have a full season to work on before actually starting any games. Instead, they're trying to develop him and win games at the same time. It's hard to put this one on Wentz, especially since they knew some of these concerns when they traded up to draft him.

And, on the bright side, it's hopefully something they can clean up in the offseason.

This is one area in which I think Wentz has done extremely well, especially for a rookie.

Shot 10 - In same breath though, Wentz can manipulate coverage. Has done things like this all year, moves LB from passing lane for 1st down pic.twitter.com/25GsorB2ZQ

I think Carson's vision, his coverage recognition, is way beyond his years. There are very few plays where he's fooled in coverage. You see that time and time again – quarterbacks get fooled by disguise. I think he has really good vision; he's shown good vision. Every quarterback is going to make a bad decision every now and then. [You] throw the ball down the middle in cover two when maybe you should have come underneath. That happens all the time. I mean, all the time. It's not acceptable, you don't want to do it, but sometimes you're trying to make a play and it happens. But I think overall his vision, his recognition of coverages, has been very good.

Like Reich said, there are going to be poor decisions made every once in a while, especially this early in a player's career.

Shot 9 - Like any rookie, Wentz can be fooled by coverage. Happened on near INT. Thought he had man cvg, Pacman peels off, disrupts route pic.twitter.com/IHZH63UgB0

But more often than not, it hasn't been his decision-making that's led to turnovers.

For the most part, Wentz's accuracy is more than fine. Every once in a while, and more so recently, he been wildly overthrowing his receivers.

This is one of the scariest developments we've seen out of Wentz, as these types of throws were almost nonexistent during the summer, and now they've been one of the main contributors to his 10 interceptions over the last seven weeks, not counting all the ones that have been dropped by defenders.

It's also one of the things Reich would like to see fixed immediately, not put off until the end of the season.

No, they need to stop now. You need to have the mindset that it needs to stop now. It can't go another game. And as far as a pass sailing, I guess it's true with every player has a … I like golf, so you watch golfers, and everybody has a miss. I tend to miss a little bit right of the fairway. Right now, if Carson's [Wentz] miss is a little bit of a highball, is it dramatic? I don't think it's anything out of the acceptable range. The guy is still playing a lot of good football and completing a lot of passes.

I wrote about Wentz's mental makeup earlier, but one more quote from Reich before I let you go.

It has to do with the talent around Wentz, especially in Sunday's loss to the Bengals in which he was without his starting running back and his leading receiver was an undrafted rookie who was playing in his second NFL game, and whether or not that's causing him to try to do too much on the field to compensate.

Yeah, probably at times. Every quarterback tries to do too much, especially when you're not generating the points that we want to generate. Are there going to be times when you try to do too much? Yes, absolutely. Has it happened? Yeah. But I don't think it's happened as much as it could have, to be honest with you. I think he's handled it pretty well. I think during this past game on the sideline when you get down points, you've got a head coach who's played a lot, [QB] Coach [John] DeFilippo – we've all been around the block a few times.

You get behind and we're on the sideline telling him, ‘Okay, one play at a time, let's not go crazy here. We can't get it all back in one play.’ Those things are all being talked about on the sidelines. We've all been around the block. But when you're out there doing it, it's hard. That's a hard position to play, and I think he's handled it very well.

It's hard not to feel for the kid when it comes to this, especially when you compare his "weapons" to what someone like Dak Prescott has in Dallas. And that's not even including the difference in the two offensive lines.

There are just four games left before we can fully judge his rookie season. And in a what-have-you-done-for-me-lately league, they could go a long way in changing how people remember the first year of the Carson Wentz Era -- for better or for worse.