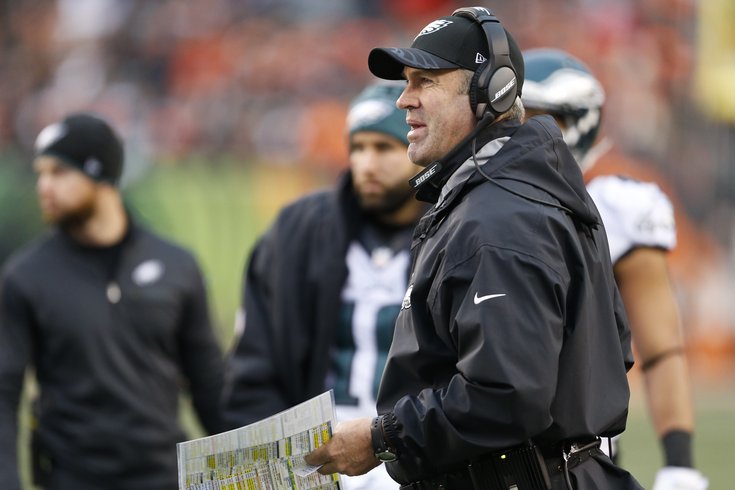 Philadelphia Eagles head coach Doug Pederson looks on during the second half of his team's 32-14 loss to the Cincinnati Bengals.

At this point, saying the Philadelphia Eagles are heading in the right direction would probably warrant a trip to the emergency room for some immediate medical attention, starting with a brain scan.

The Birds have now lost three straight and seven of their last nine after starting the season 3-0. They allowed a season-high 32 points and 412 total yards of offense to a Cincinnati Bengals team that was missing its top receiver, Pro Bowler A.J. Green, and running back Giovani Bernard. Rookie Carson Wentz had his worst start of the season and threw three interceptions for the first time in his career. And to top it all off, they never actually competed, allowing the Bengals to score on each of their first six possessions and take a 29-0 lead.

Unlike last week, however, first-year head coach Doug Pederson didn't try to sugarcoat the result following his team's 32-14 loss in Cincinnati on Sunday. Not that there was any way he could have.

“Disappointing," Pederson said of his team's performance. "That’s the first thing. It’s a collective effort — all three phases tonight. It’s something that we pride ourselves to play better, to not turn the ball over, to get off the field on third downs, to rush the passer. All the things that we’re not doing now, those are the things we’ve got to get back to doing. I just mentioned to the team that we, individually, myself included — I tell you guys this every week, but I’m the hardest critic on myself and I’m with that group in the locker room and we have to make a collective effort — but individually take that collective effort and just look at yourself in the mirror.

"You know, [look at] the man in the mirror. And see if we’re doing enough of what we need to do to put ourselves in positions to not make these plays that we’re making. The penalties have got to stop. Obviously the turnovers, things like that. They’re just not characteristic of how we coach and how we play.”

The problem is that those things have become characteristic of how this team plays and, by extension, how it's coached.

The same issues, the ones Pederson outlined above, continue to plague his team week after week. Some are excusable – like, for example, the fact that an undrafted rookie making his second NFL appearance was Wentz's most reliable receiver on Sunday – but most of them are not. Worse yet, some of them are correctable – like the egregious number of penalties they've been called for this season, including 10 on Sunday – but nothing seems to be getting done to fix them.

If these issues are not emblematic of the team, then I'd love to know what Pederson thinks this team actually is. It almost appears as though he's still living in a pre-bye-week reality, one in which the Eagles are dominating on both sides of the ball look capable of blowing out any team in the league.

But that's not what the Eagles are. They've presented a much stronger case that this team is closer to the one we've seen in the last two month than they are to the one we saw in the first month of the season.

With a rookie quarterback and a first-year coach, a logical person would expect the team to improve as the season progressed. So what's happened to cause this team to go in the complete opposite direction?

“It’s probably a lot of factors," Pederson said. "I think one, you can look at a little bit of the adversity. We lost our right tackle when things started going the other direction. We had a few injuries in there. Teams now obviously have film on us, film on Carson. They could attack differently. And then it just all begins to kind of snowball and gets us in the situation we’re in.”

None of those factors, at least according to Pederson, include a lack of effort. Watching their performance on Sunday, that may be difficult to believe.

Whether it's truly disciplined players, like he says, or a lack of effort, the blame begins with the coach. He can't suddenly transform his corps of mediocre wide receivers into a bunch of Calvin Johnsons, but he can teach them how not to hold on screen passes or help them with running cleaner routes and making better plays on 50-50 balls.

That's just one example, but the same can be said about almost every position group.

"I'm hurting like the players are," Pederson said. "Obviously, I'm disappointed that we are where we are because I've felt like we had some opportunities to win some of these games and put ourselves in a better position down the stretch, even with all the adversity we've faced in the last few weeks."

Adversity or not, as these same deficiencies continued to be exposed week in and week out, it's going to become increasing difficult for Pederson to hide behind phrases like "not characteristic of how we coach and how we play."

And he's quickly running out of time to prove otherwise.

"We still have a month of football left, and obviously three of the next four are division opponents," Pederson added. "We've got some challenges. I told the guys in the locker room at the end of the game that this thing can go one of two ways. And I only know of one way its going to go; that's up. We've just got to dig ourselves out of this hole and it starts next week."

If there's truly nowhere to go but up, that can only mean one thing: this Eagles team has hit rock bottom.

Unfortunately, they may still have a little further to fall.