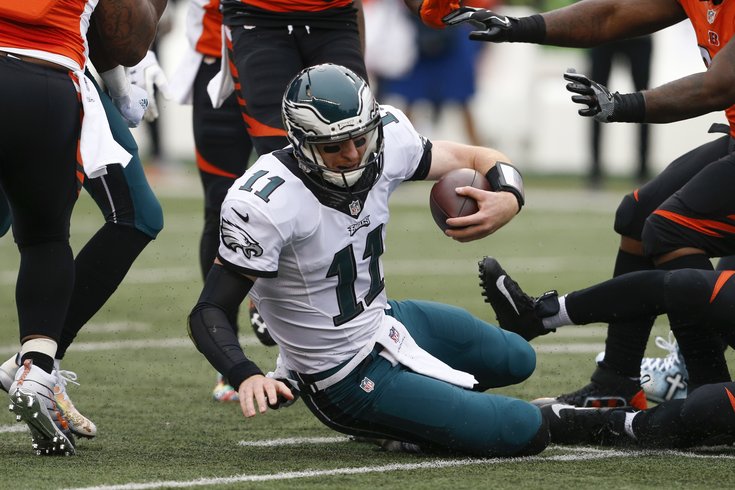 Philadelphia Eagles quarterback Carson Wentz had the worst game of his rookie season on Sunday.

The Eagles' road woes continued on Sunday as they fell to the Bengals, 32-14, for their third straight loss.

It was a game in which the Eagles never really competed, despite the fact that Cincinnati was without its two best offensive skill players and had lost three in a row. With the loss, the Birds fell to 5-7 on the season and have all but played themselves out of playoff contention.

MORE ON THE EAGLES: Bengals 19, Eagles 0: Good, bad and ugly from first half | Report: Eagles will target WR DeSean Jackson in free agency | Live updates, analysis/open thread as the Eagles take on the Bengals | Eagles-Bengals inactives, with analysis

Here are some final thoughts on a game you probably can't wait to forget.

•  Paul Turner was the lone bright spot for the Eagles. He caught 6 passes on 7 targets for 80 yards, including a 41-yarder for his first NFL reception. He led the team in receiving yards and only Zach Ertz had more catches (9).

• At least the Eagles weren't shut out. Wentz found Zach Ertz for a 13-yard score on 4th and 5 in the third quarter.

They'd add another TD -- a two-yard run by Darren Sproles -- with about seven minutes left to play, but it was too little, too late.

•  The Eagles forced their first turnover in quite some time on the Bengals' ensuing possession. I tweeted this at the conclusion of the third quarter.

It's now been 11 quarters (184 snaps) since Eagles' last takeaway. They've also recorded just one sack in that span.

On the very next play, it was Bennie Logan forcing the Rex Burkhead fumble, which was recovered by Jaylen Watkins.

Eagles recovered a fumble, and it was the first time the Bengals didn’t end a drive with points all day. It’s the 4th quarter. pic.twitter.com/qFJqaM2VcW

They got another turnover late in the game when the Bengals inexplicably decided to pass the ball to offensive lineman Jake Fisher. Nigel Bradham knocked the ball out, and it was recovered by Mychal Kendricks.

Bengals get cute and offer the Eagles a glimmer of hope @AdrianFedkiw pic.twitter.com/hYwV7xmoqc

•  The Eagles weren't able to get any points off of the Bengals turnovers due to turnovers of their own. After the first takeaway, Wentz overthrew his intended target, something he's struggled with recently.

Can't tell you how many times Wentz has overthrown the seam pass this year @AdrianFedkiw pic.twitter.com/Rmm5ts0jnx

Then, late in the fourth with the Eagles down two possessions, Wentz was intercepted for the third time in the game's second half.

•  Wentz played his worst game of the season. He finished 36-of-60 for 308, a TD and three INTs (58.2 passer rating). That's the first time in his young NFL career that Wentz has thrown three picks.

•  The Eagles finished with 53 rushing yards on 19 attempts, but 16 of them came on Carson Wentz scrambles. The Birds running backs totaled just 37 yards on 16 carries against a Bengals defense that was allowing 120 rushing yards per game.

The Bengals added a field goal on their next possession, but their streak was ended when Logan forced that fumble on the Bengals' seventh possession.

•  Cincinnati finished with 412 yards of total offense. Without A.J. Green and Giovani Bernard, two players who had accounted for 40 percent of their offense. Yikes.

•  Wentz had so many passes tipped at the line of scrimmage that this kind of felt inevitable.

•  The Eagles failed to record a sack for the second straight week and now have just one in their last three games.

•  The Eagles were better on third down this game, but only slightly ... and not when it mattered most. The Bengals started 6-of-8 -- last week the Packers were 10-of-14 -- but struggled on third down once the game got into garbage time. They finished 7-of-14 in the game, but the scoreboard tells you pretty much everything you need to know.