All coaches teach. Temple's Fran Dunphy is one of the nation's few teachers 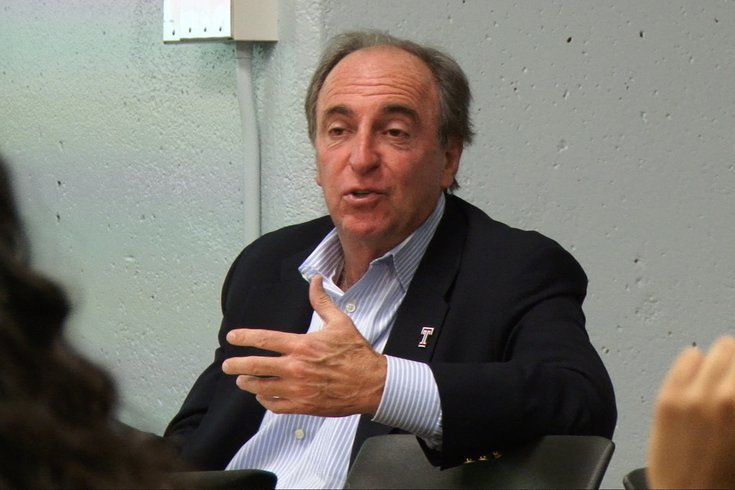 Temple coach Fran Dunphy teaching his "Management, Theory & Practice: From the Locker Room to the Board Room" class at the school.

Fran Dunphy was doing what college basketball coaches do. He was teaching, observing, and during the one hour and 20-minute session, even allowing himself a few laughs.

This wasn’t in the Liacouras Center on Broad Street with his Temple University team going through drills. This was on the corner of Montgomery and 13th, inside Speakman Hall, during an honors class in the Fox School of Business.

Dunphy isn’t just the all-time winningest coach in Big 5 history, he is also a full-time educator. Prior to arriving at Temple 11 years ago, he was a lecturer at the Wharton Executive Education program and in the management department of the Wharton School at the University of Pennsylvania.

The 68-year-old teams up with Dr. Lynne Anderson in a course entitled Management, Theory & Practice: From the Locker Room to the Board Room.

“Stories, stories, stories,’’ Anderson said with an enthusiastic smile. “He can bring concepts to life like I never could, and make it interesting, and he is the most amazing and caring networker I’ve ever met. More people love him, and he’s so attentive to everybody.’’

Dunphy has a degree in Marketing from LaSalle and a master’s in Counseling and Human Relations from Villanova.

The only other Division I basketball coach Dunphy ever heard about teaching a college course is Bobby Knight.

In a 2000 interview with television host Larry King, Knight said he taught a class at Indiana University called Methods In Coaching.

“I really didn’t talk basketball,’’ Knight said, “but how to get a job, and things I thought were important to be successful in whatever you went into. I had a good time with the kids.’’

While Dunphy’s profession is rooted in basketball, its branches extend in numerous directions.

“I talk about my job as president and CEO of a small company that is Temple basketball. I have to manage my staff, the players and our student managers. And I also have to manage up,’’ he said prior to the morning class, in his office at McGonigle Hall. “I have to manage relationships with the athletic director, the president, the board of trustees, students and alumni, and then the media and other tangents like charity work, speaking engagements; whatever I’m doing to represent the institution.

“If somebody asks you to do something, you can’t do everything, but you have to do something,’’ he reasoned. “They don’t give you this job just to coach the team. They give you it to represent. I think it’s wrong if you don’t, and you’re misreading what the job is all about."

“So that’s what I try to get to there, the networking piece. Everything you do is networking. Everything. We’re all in sales whether you believe it or not. You’re selling yourself that you know what you’re talking about. So it’s constant repetition on this.

“My whole thought process is we all think that we make life happen. I think just the opposite,’’ Dunphy said. “Life happens to you. Just be aware of it and appreciate it, accept it and react to it. I tell the kids it would be nice as you leave college and your life went on this upwardly mobile path that never had any dips in it. I’ve never known anyone who hasn’t had dips. So you have to learn how to handle that. That’s part of what life is all about: How are you going to handle your adversities? So we talk about that.’’

Dunphy said that being in a classroom gives him a better perspective on what his players go through as students. Interacting with them along Liacouras Walk gives him a verve of campus life. And students view him differently.

That may also be the response of university professors.

“I think it also gives faculty a different perspective on you, that you’re not just over here sitting in your office all the time,’’ Dunphy said.

Not only are there Dunphy sightings outside the gym, he is also heavily involved in the local Coaches vs. Cancer campaign – named to the National Council. Several years ago he joined other coaches speaking to legislators on Capitol Hill on the need for more funding for research.

He serves on the Board of Directors for Big Brothers/Big Sisters of Greater Philadelphia, as well as the Elwyn Institute for special needs children. 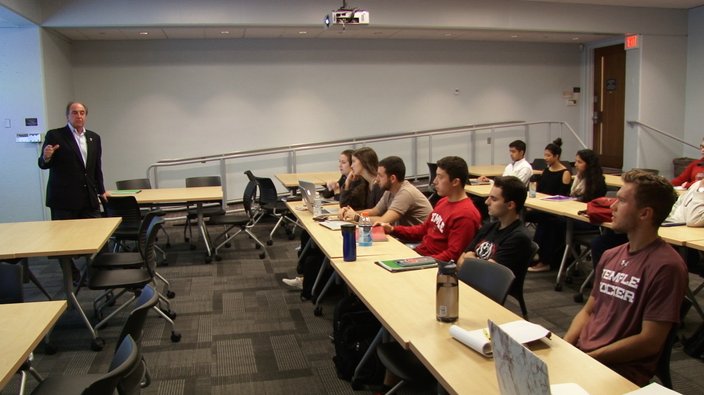 “I talk about my job as president and CEO of a small company that is Temple basketball,“ Dunphy said.

“If somebody asks you to do something, you can’t do everything, but you have to do something,’’ he reasoned. “They don’t give you this job just to coach the team. They give you it to represent. I think it’s wrong if you don’t, and you’re misreading what the job is all about. It doesn’t mean you’re not trying to win every game, and if you don’t win somebody’s coming to you and saying, ‘Hey, I really appreciate all your good work, but see you later we’re getting somebody else.’ I get that.’’

Dunphy never planned to be a basketball coach. He went into the Army after graduating from LaSalle, and upon his discharge in 1972 was, in his words, “Kind of screwing around a little bit; banging nails, laying carpet and started bartending. I joined a golf course and played golf every day, bartending at night and had a pocket full of cash. Life was pretty good.’’

A high school coach from Malvern Prep convinced Dunphy to get into the coaching game, telling the young guy he needed some direction. “I said, ‘I don’t want any direction. I like everything about my life right now.’ But something told me to do it.’’

Dunphy had finished his active duty as an enlisted assistant basketball coach at West Point. “I wasn’t very good,’’ he said. It was a college classmate, Lefty Ervin, who gave him his first college job as an assistant at LaSalle. Eventually, Dunphy became head coach at Penn, where he stayed 17 years.

“It wasn’t this life-long dream,’’ he said about his coaching career. “I don’t know what I would have done. I’ve been very, very fortunate; a very lucky man.’’

With management class over at 10:50 a.m., Dunphy headed to a tiny shop down the street where he bought two sleeves of small pretzels. The bill was $2. “That’s not enough,’’ he told the guy on the other side of the glass counter.

He left a five.

Leaving eight pretzels on top of the administrative desk on the third-floor lobby at McGonigle, he headed to his office and grabbed another coffee. His desk looked like it was attacked by someone looking for free tickets.

“We didn’t have anything,’’ he said about his family, “but we had enough. I always said this about my dad: He was born in 1921, so he was in third grade when the depression hit. They don’t go back to school, they’re on the streets doing whatever they can to survive. As it turned out, he was the least-educated man I’ve known, but the best teacher I ever had."

Dunphy, an older brother and two younger sisters grew up in the Philadelphia area. “We didn’t have anything,’’ he said about his family, “but we had enough. I always said this about my dad: He was born in 1921, so he was in third grade when the depression hit. They don’t go back to school, they’re on the streets doing whatever they can to survive. As it turned out, he was the least-educated man I’ve known, but the best teacher I ever had.

“He taught you how to get along with people, how to treat people. And he found a way. He taught himself to read and write. He figured out a way to make life good for us. My mom was the strength of course. My dad was Irish and my mom Italian. He was a Damon Runyon-ish kind of guy; singing Irish songs. And my mother’s family would be singing all the Italian songs: ‘Che la luna mezzo mare!’’’

Just another story to share with his students. One of many, like the time before a game against North Carolina, with Dunphy the last in line for pre-game handshakes as an assistant with LaSalle. Said UNC coach Dean Smith, “Have a good game, Fran.’’

“The whole half I’m sitting there thinking, ‘How the hell does he know my name?’ He studied the press guide and knew I was the guy with the mustache. I’ve done the same now for years. It doesn’t have the impact Dean had on me, but it’s a bit of a touch that separates you from the rest of the group.’’

Another story is the time he stopped at the Vietnam Veterans Memorial on the way back from a recruiting trip.

“So I’m asking for forgiveness, because the guilt sort of overcomes you. It was almost like the warmth of the sun and the spirituality of it all takes over in me. I’ve been there a few times,’’ he noted. “I can’t help myself but to go. But the guilt is just amazing. All these stories are out there, and one of these days I’ll tell that to the kids.’’