Japanese carrier teams up with Boeing for trio of designs 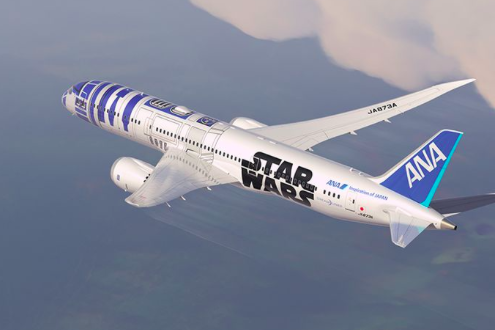 All Nippon Airways and Boeing teamed up to create a trio of "Star Wars" themed planes.

With the release of "Star Wars: The Force Awakens" just a little more than three months away, buzz for the latest installment of the epic space series continues to pick up.

Last week, the introduction of the BB-8 "Star Wars" toy, a spherical droid that can be controlled by voice command, began flying off the shelves of retailers.

While the new droid in town might have dimmed the stars of old favorites like C-3PO and R2-D2, it turns out that R2 is flying in an entirely different way.

The unveiling was staged with plenty of fanfare as stormtroopers guarded the hangar doors and "Star Wars" theme music filled the air.

Starting October 18, the decorative plane will take its first revenue flight from Tokyo's Haneda Airport to Vancouver, Canada, and from there will continue to carry ANA customers.

According to the Japanese airliner, the R2-D2 plane is one of three Star Wars themes it plans to roll out in the coming year. The other two will feature a BB-8 design on a Boeing 777-300ER and both of the droids together on a Boing 767-300.