The Answer's marijuana product will not be available to Sixers fans in the Philly region, however 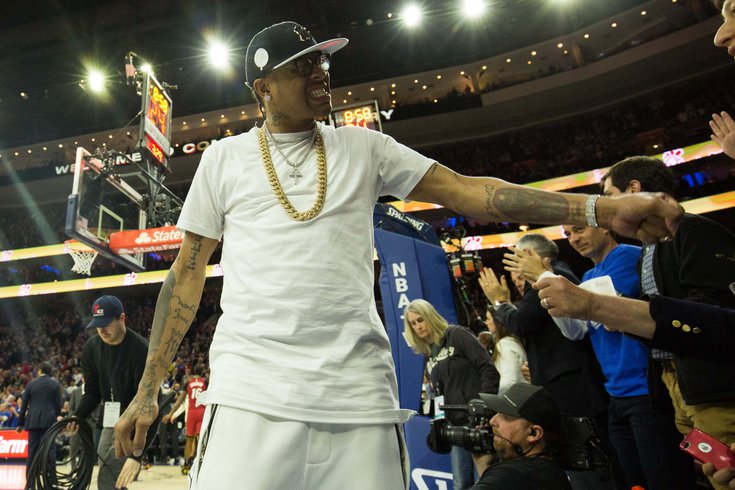 Allen Iverson is partnering with Viola Brands, a cannabis company founded by former NBA player Al Harrington. As part of the deal, the company will sell marijuana strain called The Iverson Collection that debuts this fall. The photo about shows the NBA Hall of Famer at 2018 Sixers game.

Allen Iverson is officially getting into the cannabis industry, and part of that venture will include the Sixers legend having his very own marijuana strain available this fall.

Iverson has entered into a multi-year partnership with Viola Brands, a cannabis company started in 2011 by former NBA player and New Jersey native Al Harrington.

Iverson and Harrington were never teammates during their respective NBA careers, but the Basketball Hall of Famer said that he was sold on the partnership after visiting Harrington's grow facility in Detroit earlier this year.

"I've had a lot of people approach me with business opportunities, but this one with Al was different," Iverson said. "After seeing how devoted [Al] is to this business, and him educating me on how beneficial the plant is, it just felt right. I'm excited to be a part of it. Together, we're going to change the game."

Happy to be joining my brother @cheddahcheese7 & the whole @Violabrands family. Ready to change the game!!! pic.twitter.com/R9WZcTMm8E

The Answer will assist with the company's business initiatives, such as producing exclusive merchandise in addition to cannabis and non-cannabis products. Iverson will also join Harrington and Viola in their ongoing efforts to educate the NBA and others on the benefits of cannabis and help change the stigma around professional athletes and marijuana.

The highlight of the partnership is The Iverson Collection, a series of cannabis strains that will be rolled out across markets in which Viola operates. The strain will debut in California this October, but it likely won't be available to Sixers fans in the Philly region. Viola currently operates and produces a variety of cannabis products in California, Colorado, Michigan, Oregon and Washington.

Viola focuses on increasing minority ownership in the cannabis industry, reinvesting in local communities and creating opportunities for others in the space.

Harrington, the company's CEO and head grower, was recently featured on "Real Sports with Bryant Gumbel," where he talked about the purpose of Viola.

"My mission is to create 100 Black millionaires through cannabis," Harrington said. "There's different layers to this onion for sure, but one of them that's at the core of my heart is diversity in the cannabis space."

The full segment can be streamed on HBO Max.

Former NBA stars Al Harrington (@cheddahcheese7) and @Matt_Barnes22 are part of the new green gold rush of the legal cannabis industry, looking to grow their profits and help the Black community along the way. An all-new episode of #RealSports premieres Jul 27 on @HBOMax. pic.twitter.com/PW447pdqI4

Other former players who have gotten into the cannabis industry include soon-to-be Basketball Hall of Famers Paul Pierce and Chris Webber, as well as NBA champion Matt Barnes.