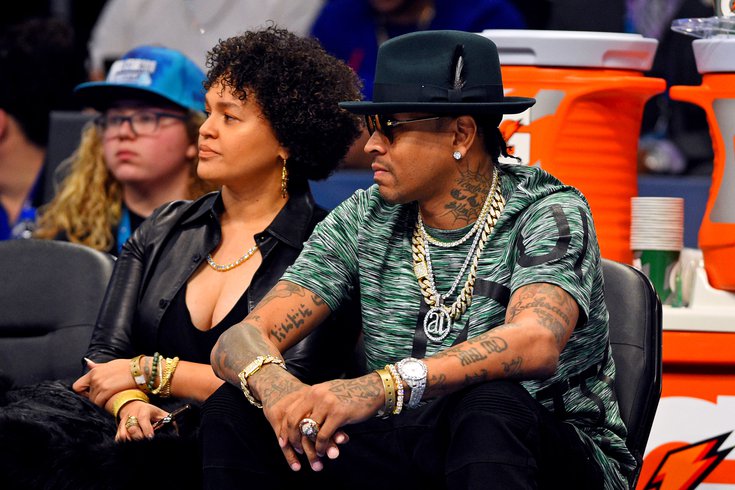 Allen Iverson admitted that he would've needed to lift more weights had he committed to football over basketball for a career.

No one in their right mind would think to argue with Allen Iverson's accomplished basketball resume.

NBA MVP. Eleven-time All-Star. Seven-time All-NBA team selection. Four-time league scoring champion. Rookie of the Year. Collegiate All-American. And most notably, a Basketball Hall of Famer. The accolades go on and on when talking about the Sixers legend.

But what if A.I. wasn't one of the greatest guards in NBA history? The answer to that question is that he would've been a star football player, according to The Answer himself.

Sharpe asked Iverson if he thought he would have been as good of an NFL player as he was an NBA player, and Iverson was blunt in his response.

Before he committed solely to basketball, Bubba Chuck was a dual-sport athlete at Bethel High School in Hampton, Virginia. Iverson was the starting quarterback and also played running back, cornerback and returned kickoffs for the high school football team. Iverson led the team to a state championship and was the Associated Press' High School Player of the Year.

Standing at 6'0," Iverson's height may have been a problem in college and professional football. Given how much he likely would have run out of the pocket, Iverson may have been more injury-prone.

But Iverson said that he would've needed to bulk up had he committed to football over basketball.

"If I would have had to get on the gridiron, then I never would've stopped lifting weights after high school," Iverson told Sharpe. "You would've seen a whole totally different physique. I might be looking like you or something. I would've had to lift or would've had a short career. I just didn't like [lifting] weights because I thought they were too heavy. But football I know I would've had to lift and you can ask anybody from Virginia and they would tell you Shannon that hands down that I would've been better in football. That was my first love."

Iverson said he would've wanted to do a little bit of everything on the field had he chosen to play football over basketball.

"I would've wanted to be accurate like Aaron Rodgers and have the arm like Aaron Rodgers. But I definitely would wanna run like Russell [Wilson], definitely would wanna run like Lamar Jackson or Michael Vick," Iverson told Sharpe. "In basketball, I didn't want the opponent to feel like they could do just one thing to shut me down. I wanted to have a variety of things that I could counteract with when they try to take something away from me, and it would've been the same thing in football."

.@alleniverson: “Not being cocky or arrogant, I know I would’ve been a better player in football than basketball.” pic.twitter.com/33Kn1mApu9

Iverson later shared a football highlight reel starring himself on social media, and it's no question that he could ball.

With the utmost respect & humbleness, it’s not a joke!!! @clubshayshay @espn

Had Iverson chosen football over basketball is a great what-if in Philly sports. Maybe there's a future Marvel television show or film in the making as part of the MCU's fourth phase that explores a variant of Iverson playing college and professional football in a different timeline. Talk about blowing up the multiverse.

Would Iverson at quarterback have been enough to get the Eagles over the hump in their three-straight NFC Championship game defeats in the early 2000s or the franchise its first Super Bowl title in 2004?

Would Iverson have been the Eagles' first-round draft pick instead of the Sixers' No. 1 overall pick in 1996?

Would Iverson's No. 3 hang at Lincoln Financial Field instead of from the rafters at the Wells Fargo Center?

Would former college basketball player Donovan McNabb have suited up instead for the Sixers and helped them win the 2001 NBA title?

We'll never have the answers to these questions, but thanks to Iverson's recent proclamation, Philly sports fans can only imagine how differently things could've turned out.